James Ivory’s 1987 film “Maurice”, which happens to be released in South Korean in this week, is a sumptuous queer period drama to be admired and appreciated. Based on the novel of the same name by E. M. Forster, the movie calmly and elegantly observes the repressed romantic passion inside its titular hero, and it is often poignant to see how he struggles with the feelings forbidden by the world to which he belongs.

After the amusing prologue scene between a young boy and his teacher who explains to him a bit about man, woman, and sex, the movie, which is mainly set in Britain during the early 1910s, moves forward to several years later. That boy, Maurice Hall (James Wilby), grows up to be a lad currently studying at Cambridge, and we see him attending a private meeting with several other students and their dean. During that meeting, he happens to draw the attention of one of the other students, and that later leads to his encounter with a senior student named Clive Durham (Hugh Grant), who instantly gets along well with Maurice right from the beginning.

As they spend more time with each other, Maurice comes to feel something more than friendship between him and Clive, and Clive also turns out to be attracted a lot to Maurice. Although they have to step back right after they become more direct about their mutual attraction to each other for the first time, Maurice decides to take a bold forward step toward Clive at one night, and Clive willingly accepts Maurice’ declaration of love, though he prefers to keep their burgeoning relationship somewhere between friendship and platonic love. 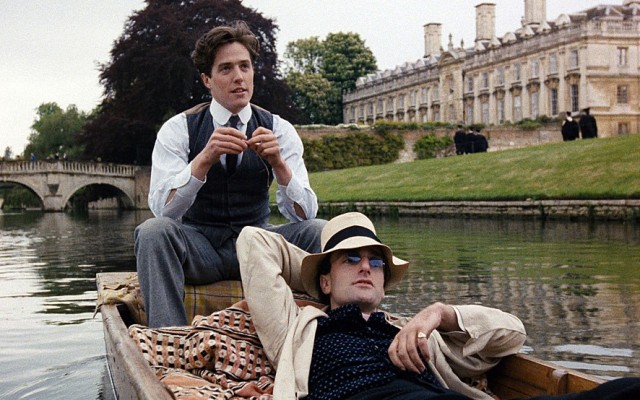 And we see how their relationship is continued even after their college years. After deciding to quit his college education due to a little matter with the dean, Maurice begins to work as a stock broker just like his dead father, though his mother and sisters are not particularly pleased about his decision. Once he completes his education course at Cambridge, Clive studies more to be a barrister, and many people including his family members expect a lot from him as he advances further for his future political career. Although they are respectively taking different paths now, Maurice and Clive remain close to each other nonetheless, and Clive is always ready to accept Maurice as a guest of his big country manor.

However, both of them are constantly aware of how their love is forbidden by their conservative British society, which regards homosexuality as a depraved crime to be punished. At one point, one of their former  schoolmates is arrested for homosexuality, and Clive helplessly watches that person ruined and humiliated at the court. More scared about what may happen to his life and career, he eventually decides to conform to the social expectation on him, and that certainly hurts Maurice a lot, who consequently throws a harsh and cruel lie to one of his sisters just because she is clearly interested in Clive.

Clive later marries some respectable young lady, but he still wants to keep Maurice around him as a close friend, and Maurice becomes more agonized over his increasingly repressed relationship with Clive. Feeling more desperate than before, he consults with his family doctor, but, not so surprisingly, the doctor shows nothing but disgust and contempt, and his subsequent private sessions with a therapist in London do not help much, though the therapist shows some compassion and understanding to Maurice in the end.

Meanwhile, Maurice comes to notice more of Alec Scudder (Rupert Graves), a handsome gamekeeper working in Clive’s country manor. While he hesitates to get closer to Alec, Alec already senses Maurice being attracted to him, and that leads to a moment which resonates with the similar moment between Maurice and Clive early in the film. Maurice surely likes how willingly Alec goes forward for mutual carnal pleasure in contrast to Clive, but there is a considerable social gap between him and Alec, and he may have to give up everything in his respectable life because their love crosses more than one social boundary.

The adapted screenplay by Ivory and his co-writer Kit Hesketh-Harvey eventually arrives at an ending which may feel too convenient and impractical to some of you, but the movie is still worthwhile to watch. While its production quality is impeccable in terms of mood and details (it was nominated for Best Costume Oscar, by the way), the main cast members are suitably cast in their respective roles, and they all give engaging performances on the whole. James Wilby and Hugh Grant, who received the Best Actor award together at the Venice Film Festival, are convincing in their discreet romantic interactions, and the other notable main casting members in the film including Rupert Graves, Denholm Elliott, Simon Callow, Billie Whitelaw, Barry Foster, Judy Parfitt, and Ben Kingsley are also solid in their supporting parts.

In conclusion, “Maurice” is less impressive compared to Ivory and his longtime partner/producer Ismail Merchant’s other notable works such as “Room with a View” (1986), “Howards End” (1992), and “The Remains of the Day” (1993), and I must say that I felt a bit impatient during my viewing due to its slow narrative pacing and long running time (140 minutes), but it is still recommendable for its good mood, performance, and storytelling. Sure, it may look old-fashioned and introverted compared to many recent queer films which are more honest and forthright in comparison, but, boy, look at how exquisitely and courteously repressed its hero is.

This entry was posted in Movies and tagged Homosexuality, Romance. Bookmark the permalink.