I could not help but get a bit tired and numbed as watching “Fast & Furious Presents: Hobbs & Shaw”, a spin-off entry from The Fast and the Furious franchise. While it is not boring at all thanks to the amusing chemistry between its two engaging lead performers, the movie eventually begins to spin its wheels during its last act despite lots of bangs and crashes on the screen, and I felt rather dissatisfied as walking out of the screening room along with other audiences.

The movie mainly revolves around the two main characters of The Fast and the Furious franchise: DSS agent Luke Hobbs (Dwayne Johnson) and former MI6 agent Deckard Shaw (Jason Statham). Although they once fought to death with each other in “Furious 7” (2015) because Shaw was personally quite pissed off about what happened to his younger brother at the end of “Fast & Furious 6” (2013), they eventually came to work together as shown from “The Fate of the Furious” (2017), and now they find themselves working together again here in this film although they still do not like each other much.

An assignment given to them is pretty urgent to say the least. Some powerful secret organization recently developed a deadly virus to wipe out most of the entire human race, and MI6 attempts to snatch the virus at the last minute, but the mission is disastrously failed as everyone except Agent Hattie Shaw (Vanessa Shaw), who is, yes, Shaw’s younger sister. While she manages to take away the virus from the minions of that secret organization in the end, she soon finds herself on the run as wrongfully accused of deliberately botching the mission, and, to make matters worse, she does not have much time as she has no choice but to become the living carrier of the virus just like Thandie Newton’s character did in “Mission: Impossible 2” (2000).

Although they clash with each other once they meet each other again in London, it does not take much time for Hobbs and Shaw to realize what is really going on, because they also find themselves in grave peril along with Hattie not long after she is captured to be interrogated by Hobbs. That secret organization already sends a bunch of henchmen including a guy named Brixton Lore (Idris Elba), and Lore, who once worked with Shaw but is now turned into a cyber-genetically enhanced super-soldier, is not someone who can be easily stopped at all.

As Hobbs, Shaw, and Hattie try to evade Lore and his goons and find a way to save her, they surely go through many risky moments as expected, and the movie does not disappoint us as serving us with two big vehicle action sequences. Both of them are surely as outrageously fun as required, and director David Leitch, who unofficially co-directed “John Wick” (2014) and then moved onto “Atomic Blonde” (2017), did a skillful job of maintaining the high level of thrill and excitement without losing our attention.

However, many of entertaining moments in the film come from the rocky interactions between Dwayne Johnson and Jason Statham, who are no stranger to going back and forth between comedy and action. Right from the beginning, the movie makes lots of fun from how different their characters are from each other, and Johnson and Statham willingly go for more laughs as their characters constantly bicker with each other like two big boys who still need to learn how to get along with each other. 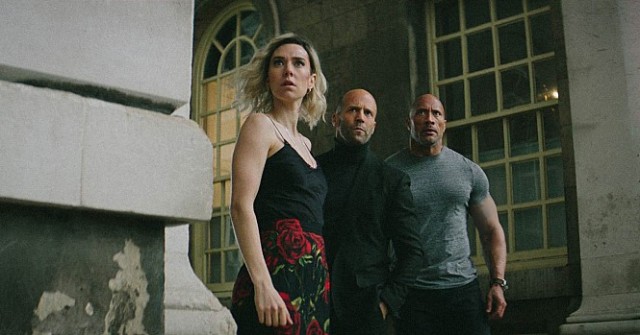 And their numerous comic interactions throughout the film are further enhanced by several notable supporting performers in the film. Although basically functioning as a no-nonsense female character stuck between our two tough but incorrigible dudes, Vanessa Kirby shows her considerable comic talent as balancing herself well between her two co-stars, and she also demonstrates that she can be as tough and gritty as, say, Charlize Theron in “Atomic Blonde”. In case of two certain recognizable performers appearing in the movie, they are clearly enjoying their respective juicy moments as fully utilizing their comic talent, and Helen Mirren, who previously appeared briefly in “The Fate of the Furious”, has a little more fun than before.

Unfortunately, the movie gets weakened whenever it becomes relatively more serious and emphasizes the importance of, yes, family, and that frequently happens during its last act. While it certainly goes for full-throttle mode around that narrative point, the overall result is merely overlong and excessive without enough sense of fun, and the final moment between Lore and our trio is rather anti-climactic to say the least.

In addition, Lore is not particularly memorable as the main villain of the story, and it is really disappointing to see Idris Elba wasted in a bland and humorless role. Sure, he looks as menacing and formidable as we can expect from this intense and charismatic actor, but that is all he is demanded to do in the film, and you will probably come to miss his far more electrifying performance in “Pacific Rim” (2013).

In conclusion, “Fast & Furious Presents: Hobbs & Shaw” is fairly competent as your typical summer blockbuster action flick, but it did not satisfy me as much as “Furious 7” or “Atomic Blonde”. Therefore, I give the movie 2.5 stars, but it will entertain you as much as you paid if you just want no more than big, loud action scenes. After all, that has been the whole point of the Fast and the Furious franchise, hasn’t it? 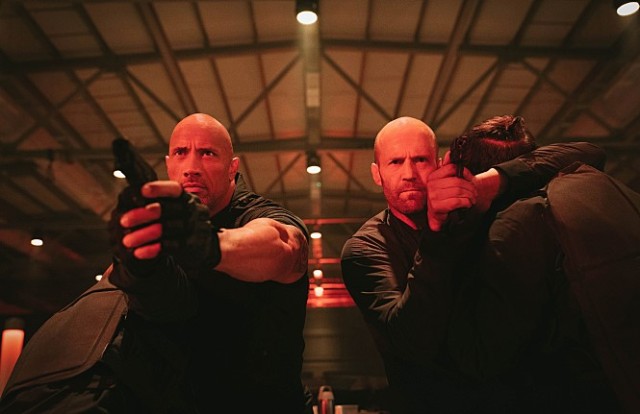 This entry was posted in Movies and tagged action. Bookmark the permalink.