Billy Wilder’s “One, Two, Three” is often breathtaking for how relentlessly it drives its plot and characters for a barrage of laughs and chuckles from the beginning to the end. When I watched it for the first time in early 2004, I was utterly astonished by its breakneck narrative pacing coupled with numerous broad but sharp satiric touches to be savored. When I recently revisited it, I was surprised again as observing how exhilaratingly those funny moments in the film work, and I came to appreciate more of how daringly Wilder and his lead actor pushed their limits at that time.

James Cagney plays C.R. MacNamara, a high-ranking executive of the Coca-Cola company who has been not that happy about being stationed in West Berlin, 1961. Since his career took a downturn due to a disastrous fiasco in the Middle East several years ago, he has worked very hard for going up the corporate ladder again, and now he is supervising the production and sales of Coca-Cola in West Germany, but he is still not very content while eagerly waiting for any chance for the promotion to the head of Western European Coca-Cola Operations in London. To impress more his boss and others at the Coca-Cola headquarters in Atlanta, he has been working on the possibility of expanding the market to Russia and, possibly, other countries behind the Iron Curtain, but, not so surprisingly, dealing with Russian officials turn out to be a little too tricky as both sides keep refusing to step back more for the final agreement.

However, to MacNamara’s disappointment, it turns out that his boss is not particularly interested in dealing with Russians as your average conservative Southern guy. Instead, he asks MacNamara to look after his lively but problematic adolescent daughter Scarlett (Pamela Tiffin), who has been bouncing around here and there in the Europe for a while since causing the latest headache for her parents. MacNamara’s wife Phyllis (Arlene Francis) is not so pleased to hear that they have to cancel a family vacation for taking care of Scarlett, but, what do you know, it does not take much time for her to be amused and charmed by the incorrigibly irrepressible personality of Scarlett, who can be regarded as a precursor to those hippie girls in the late 1960s.

While her stay in MacNamara’s house is eventually extended from two weeks to two months, it looks like MacNarama may finally get a chance for promotion as Scarlett seems to be having a really good time in Berlin without causing any trouble, but, of course, he belatedly comes to learn about what she has been doing behind her back. Several weeks ago, she met a hard-core communist lad named Otto Piffl (Horst Buchholz) in East Berlin, and they instantly got closer to each other as frequently spending time together. She does not have any problem with his staunch anti-American viewpoint (“Why, that ain’t anti-American, it’s anti-Yankee. And where I come from, everybody’s against the Yankees.”), and now they become a married couple ready to leave for Moscow (“They’ve assigned us a magnificent apartment, just a short walk from the bathroom!”).

Horrified by this unexpected revelation, MacNamara quickly embarks on taking care of this big problem because Scarlett’s parents will soon come to West Berlin for seeing their dear daughter. At first, it seems that all he has to do is pushing Otto away from Scarlett once and for all and then nullifying their marriage, but, alas, the situation becomes increasingly complicated for him, and he soon finds himself juggling numerous things together for getting the situation under control. Besides Otto and Scarlett, he has to handle 1) a trio of Russian officials, 2) a German assistant who frequently annoys MacNamara for his old army habit, 3) a German secretary who is quite willing to do ‘overtime’ for MacNarama, and 4) a bunch of other figures who can be easily persuaded to do MacNamara’s bidding via the power of, yes, money.

Cheerfully throwing more craziness to MacNamara’s circumstance, the screenplay Wilder and his co-writer I.A.L. Diamond, which was adapted from Ferenc Molnár’s 1929 Hungarian one-act play “Egy, kettő, három” with some clear influence from “Ninotchka” (1939), seldom stops as accelerating itself more and more, and its resulting comic intensity rivals that of those Hollywood classic screwball films in the 1930s such as Howard Hawks’ “Bringing Up Baby” (1938). As reflected by the instruction on written on the front of their screenplay, Wilder and Diamond were pretty clear about what they wanted from the beginning: “This piece must be played molto furioso. Suggested speed: 110 miles an hour–on the curves–140 miles an hour in the straightaways.” To be frank with you, if you think the characters in David Fincher’s “The Social Network” (2010) talk too fast, your mind may be overloaded especially during the second half of the movie.

Like many of Wilder’s comedy films, the movie occasionally shows sardonic sides behind its broad comic moments. While generating some edgy laughs from the postwar Germany society still recovering from its dark, shameful past (One of the most amusing moments in the film comes from when MacNamara’s German assistant happens to encounter his old boss), it certainly makes a big fun on the ridiculous aspects of the Cold War, and there is even one particular moment foreshadowing that perilous international crisis which happened not long after the movie was released in 1961 (“We have trade agreement with Cuba: they send us cigars, we send them rockets.”). As a matter of fact, Wilder had to halt the shooting of the film in Berlin when the Berlin Wall went up on August 13th, 1961, and he and his crew had no choice but to move to Munich for completing the movie.

And the movie is also frankly cynical in case of depicting MacNamara’s capitalistic tactics, which surely remind us of how venal and selfish we can be from time to time. Almost everyone in the film has his price, and MacNamara does not have any problem with that at all. Fully focused on that elusive chance of promotion, he is prepared to accomplish his emergency mission within a few remaining hours by any means necessary, and he never feels any compunction as pushing himself and others around him as hard as he can – except when he faces the possibility of losing what matters most in his life later in the story.

Nevertheless, it is really fun to watch him trying to do his best in the name of survival and success, and we never get bored as the movie briskly glides along its bumpy narrative full of silly caricature characters and ridiculous plot turns. As Aram Khachaturian’s “Sabre Dance” is frequently utilized in André Previn’s bouncy score, we come to brace ourselves more for crazier moments to come, and we are not so surprised when even Otto finds himself swept along with others by MacNamara’s scheme, which eventually leads to quite an ironic outcome around the finale. 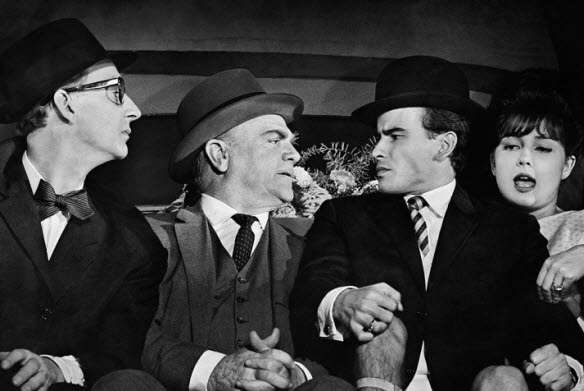 Above all, the movie depends a lot on Cagney’s presence and talent. Watching him busily handling them on the screen is akin to beholding a virtuoso precariously playing at the extreme end of his talent. Although he was understandably reluctant to take the role at first, Cagney, who was 62 year old when the movie came out, threw himself into his role as much as he did in “Yankee Doodle Dandy” (1942), and it is often spellbinding to see him deftly handling a number of talky scenes in the film while never losing control or speed at all. As a matter of fact, it is no wonder that he subsequently retired from acting for next 20 years until he appeared in Milos Forman’s “Ragtime” (1981), which was the last theatrical film in his long, distinguished acting career.

Cagney is surrounded by several colorful supporting performers also willingly going for big laughs whenever they get chance. While Pamela Tiffin is hilariously naïve and superficial in her supporting role, Arlene Francis is wryly acerbic as MacNamara’s no-nonsense wife, and Liselotte Pulver has a terrific showstopper moment when her character joyously performs a sort of striptease for those Russian officials in the middle of the movie. In case of Horst Buchholz, he is the weakest link in the film due to his rather strained performance, but his abrasive attitude clashes well with Cagney’s forceful persona on the screen, and you may be amused to learn that Cagney disliked Buchholz so much on the set that he often felt urged to “knock him on his ass”.

Although it is relatively less stellar compared to the comic perfection of “Some Like It Hot” (1959) or the bittersweet sublimity of “The Apartment” (1960), “One, Two, Three” is one of Wilder’s finest works thanks to its sheer farcical ferocity fueled by Cagney’s vigorously committed performance, and I dare to say that it is far more exciting and memorable than whatever I saw from those recent big blockbuster action flicks such as, say, “The Fast and The Furious” (2001) and its disposable sequels. Just watch how Cagney and the movie run at full speed together, and you will see what I mean.

This entry was posted in Movies and tagged Berlin, Coca-Cola, Cold War, Comedy. Bookmark the permalink.