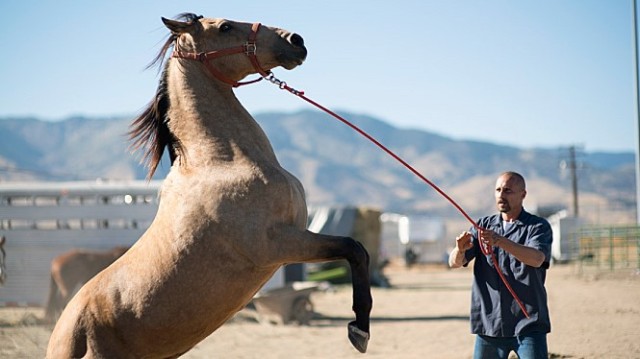 The story and characters of “The Mustang” are familiar to the bone. Here is a violent, troubled man who has been struggling with his guilt and anger, and the movie simply observes he gradually goes through a process of rehabilitation and redemption as training a wild animal. While its rather predictable narrative may not surprise you much, the movie brings considerable realism and emotion to its seemingly plain story and characters, and the result is quite more powerful than expected.

After the prologue scene unfolded somewhere in the remote wilderness region of Nevada, the movie introduces us to Roman Coleman (Matthias Schoennaerts), a prisoner who has been recently transferred to the Nevada State Prison. More than 10 years ago, Roman was arrested and then incarcerated for a serious case of domestic violence, and he is not particularly interested in rehabilitation because he knows too well that he is still coping with his short temper and violent tendency, which were the main cause of that irreversible tragic incident. When his daughter visits him because he needs to sign some documents for her, he does not even try to reconciliate with her, and she is not so surprised while showing more bitterness toward her father.

Anyway, through the recommendation of the caring prison counselor, Roman is subsequently assigned to outdoor maintenance, and that is how he encounters a rehabilitation program involving the training of wild mustangs. As mentioned at the beginning and ending of the film, such a rehabilitation program like that really exist in not only Nevada and several other states in US, and it was actually reported that prisoners participating in this kind of rehabilitation program have showed less tendency to re-offend.

Although he is not that interested in this rehabilitation program at first, Roman eventually comes to participate in it under the guidance of a cantankerous old rancher, and he is subsequently assigned to train a wild mustang which looks quite difficult to handle for its wild temper. He gets some help from one of his fellow prisoners, but he keeps struggling in his attempt to tame and connect with that horse, and, not so surprisingly, he soon comes to lose temper again.

As a result, Roman is thrown into solitary confinement, and it looks like he will never be allowed to be back in the program, but, as spending more time in the cell, he comes to think more about that horse. He does some study on horse training (How he obtains a magazine on horse training is one of the fascinating realistic background details in the movie, by the way), and then he applies what he has learned to a sudden emergency situation where every horse has to be put inside a prison building as soon as possible.

Thanks to his good effort, Roman can go back to the program, and we soon see his continuing attempt to tame and connect with that horse, which is subsequently named ‘Marquis’ by him. Of course, he becomes more frustrated and exasperated than before as Marquis stubbornly sticks to its position, but he manages to contain his temper, and, what do you know, there eventually comes a moment of breakthrough for both of them, which is subtly but powerfully presented with admirable simplicity on the screen.

After that point, things get better bit by bit for Roman. As building the bond between him and Marquis, he becomes less antisocial than before, and there is a little poignant moment when he and his fellow prisoners say honestly about their crimes in front of the prison counselor. In addition, he also sincerely tries to reconciliate with his daughter, though it turns out to be quite hard and difficult for both of them due to many years of emotional pain between them.

Of course, the movie later takes a dark turn because of Roman’s cellmate who coerces him to steal some drug from the program, but the screenplay by director Laure de Clermont-Tonnerre and her co-writers and Mona Fastvold Brock and Norman Brock thankfully does not overplay that part. While the story expectedly culminates to the key sequence associated with the final stage of the program, the movie keeps focusing on characters and, yes, horses as before, and it certainly earns the following melodramatic finale.

Matthias Schoenaerts, a charismatic Belgian actor who has been always compelling to watch since his remarkable breakout turn in Oscar-nominated Belgian film “Bullhead” (2011), demonstrates again that he is a peerless master of stoic masculinity and aching vulnerability, and he is also supported well by several good supporting performers including Jason Mitchell, Gideon Aldon, Connie Britoon, Josh Stewart, and Bruce Dern. In case of the horse playing Marquis in the film, it always looks convincing as another main character throughout the movie, and I would love to learn more about how it was handled for its good performance during the shooting of the film.

“The Mustang” is the first feature film directed by de Clermont-Tonnerre. who has also worked as an actress in a number of notable films including “The Diving Bell and the Butterfly” (2007). The movie shows that she is a good filmmaker who knows how to engage us with mood, storytelling, and performance, and I particularly admire how she deftly balances her movie well between raw realism and dry but lyrical sensitivity. On the whole, this is surely a promising start for her directorial career, and it will be interesting to see what she will give us next in the future. 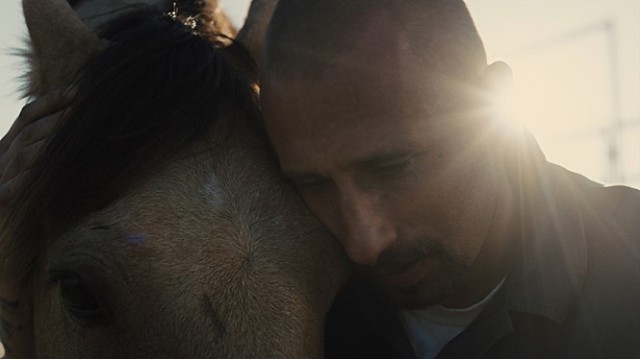 This entry was posted in Movies and tagged Prison, Prisoner, Rehabilitation, Wild horse. Bookmark the permalink.