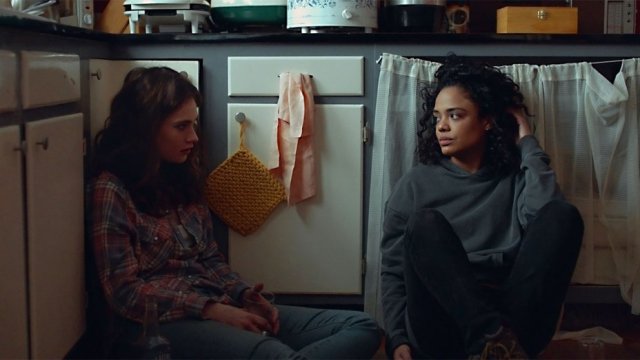 “Little Woods” is a melancholic tale of two women struggling with their increasingly desperate circumstance. While this is essentially your typical American independent film intended as a cold slice of life, the movie is a competent piece of work equipped with good storytelling and palpable realistic mood, and it is also supported well by the engaging performance from its two talented main performers.

Tessa Thompson, who has been one of the most promising new performers since her breakout turn in “Dear White People” (2014), plays a young female drug dealer named Ollie, who was recently arrested for illegally crossing the border between North Dakota and Canada with a bag of prescription medicine pills. Because she managed to hide her drug in a nearby woods right before the arrest as shown during the opening scene, she has been on probation instead of being sent to jail, and she is now ready to make a new start as her probation period will be over after 8 days. While staying away from her old business as much as she can, she has diligently earned her living through several odd jobs including providing lunch to local construction workers, and her generous probation officer is willing to help her get a better job.

Of course, there soon comes a trouble which puts Ollie in a difficult situation. Her sister Deb (Lily James) happens to get pregnant not long after breaking up with her ex-boyfriend Ian (James Badge Dale), and she is not exactly in a very good situation for having another child besides her little son. She and her son have been living in a shabby trailer car which may be taken away someday for its illegal parking, and they cannot move to Ollie’s house because the house, which originally belonged to Ollie and Deb’s recently diseased mother, is due to be foreclosed by a local bank. After some negotiation at the bank, Ollie manages to decrease the amount of the down payment necessary to prevent the foreclosure, but neither she nor Deb has enough money for that, and it looks like there is nothing they can do about this impending matter of theirs.

Eventually, Ollie becomes determined to do anything for obtaining the money to prevent the foreclosure, and she accordingly finds herself pulled back into her old business. After she retrieves that bag of pills from the woods, she promptly begins to sell them with some assistance from Ian, and it does not take much time for her to obtain a considerable amount of money.

She intends to quit once she earns enough for her and Deb, but things get a little more complicated as expected. While she must evade any chance of suspicion from her probation officer, she also has to deal with a local drug dealer for whom she once worked for, and there is a tense moment when she happens to be confronted by that guy, who is naturally not so pleased with what she has recently been doing in his business territory.

Meanwhile, we also see how Deb tries to deal with her unwanted pregnancy. When she comes to learn more about the considerable cost she has to pay for pregnancy, she decides to have an abortion, but there are not many options for her from the beginning. There is not any legal clinic for abortion around her town, so she has no choice but to go to her old friend and then contact someone who will do an illegal abortion for her, but then there comes another trouble which hits hard not only her but also Ollie.

As its two main characters are accordingly pushed to their inevitable choice later in the story, the movie calmly maintains its non-judgmental attitude while gradually increasing the tension under the surface, and it also did a good job of establishing the sense of isolation and desperation around the main characters in the film. As it becomes more apparent to them that they have no one to depend on except each other, Ollie and Deb come to stick together for taking care of their trouble, and we come to care more about what is being at stake for them.

Like any good small character drama films, the movie depends a lot on the talent and presence of its main cast members. While Thompson certainly deserves all the praises which she received for her performance here in this film, Lily James, who has been more prominent since her performances in “Cinderella” (2015) and “Mamma Mia! Here We Go Again” (2018), is equally fine as another crucial part of the story, and I particularly appreciate how she and Thompson instantly establish a long relationship between their characters right from their first scene. Although Ollie and Deb do not talk that much about their family history, we can clearly sense how much they have known each other for years, and we later get a poignant scene where they happen to get a chance to be a bit more honest to each other.

In case of other notable cast members in the film, they bring life and personality to their seemingly thankless roles. While Jack Kirby is seedy and menacing as the aforementioned local drug dealer, Lance Reddick exudes quiet decency with some watchfulness as Ollie’s probation officer, James Badge Dale, who has been always dependable since I noticed him for the first time via his small but impressive supporting performance in “Flight” (2012), is especially good during one surprisingly emotional scene with James.

“Little Woods” is the first feature film from director/writer Nia DaCosta. Although she only directed one short film before making this movie, the overall result shows that she is a promising filmmaker with considerable potential, and I was not surprised to learn later that she was recently selected as the director of the upcoming sequel to “Candyman” (1992). Although I have some skepticism on that film, it will be interesting to see how much she will advance with it, and I will certainly look forward to watching it. 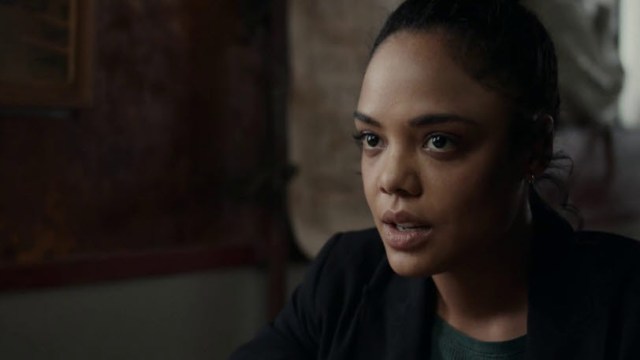 This entry was posted in Movies and tagged Abortion, Crime, drug, Sisters. Bookmark the permalink.