When “The Lego Movie” (2014) came in early 2014, it was one of major surprises during that year. I and others did not have much expectation at first, but, what do you know, the film turned out to be one of the most entertaining animation feature films of the 2010s, and it was really a shame that the film was somehow not nominated for Best Animated Feature Film Oscar, though its hideously catchy theme song “Everything Is Awesome” received an Oscar nomination at least.

And now, after “The Lego Batman Movie” (2017) and “The Lego Ninjago Movie” (2017), here comes “The Lego Movie 2: The Second Part”, which is as fun and entertaining as you can expect from a sequel. While it is understandably less refreshing as losing some of the novelty shown from the previous film, it is at least a solid product packed with a substantial amount of laugh, and, thanks to its smart and witty storytelling, it also delivers well a nice message for those young Lego fans out there in the end.

The story begins right after the ending of the previous film. When Emmet (voiced by Chris Pratt) and his friends have just saved their world, their world is suddenly invaded by a bunch of aliens from the Planet Duplo, and the situation has become quite rough for Emmet and others during next five years. As frequently attacked by these aliens, their world is turned into a sandy and barren apocalyptic one not so different from “Mad Max: Fury Road” (2015), but Emmet remains cheerful and optimistic as before in contrast to many others including his girlfriend Wyldstyle (voiced by Elizabeth Banks), who often feels frustrated with Emmet’s easygoing attitude.

On one day, there comes a new threat. A mysterious figure from another world suddenly appears, and that figure kidnaps Wyldstyle and several other figures including Batman (voiced by Will Arnett). For saving his friends, Emmet subsequently flies through a certain portal beyond his world, but he soon faces an imminent peril right after coming into the other side of the portal.

And that is when a figure named Rex, who is also voiced by Pratt, comes to the rescue of Emmet and then takes Emmet to his big spaceship, which is operated by a bunch of Velociraptors from “Jurassic World” (2015). Wryly evoking Kurt Russell’s tough guy persona, Pratt has lots of fun with his other role in the film while also bringing earnest charm to Emmet as usual, and he gives us several amusing moments as deftly handling the comic interactions between his two different characters.

Briskly rolling various characters along its busy plot, the screenplay by Phil Lord and Christopher Miller, which is based on the story by them and their co-writer Matthew Fogel, throws lots of quick jokes and silly gags as expected, and most of their attempts are fairly successful on the whole. Although I did not laugh as much as I did while watching the previous film, I was constantly amused and entertained by its small and big funny moments at least, and I must admit that I was tickled by a hilariously manipulative musical sequence between the queen and a certain main character in the film. 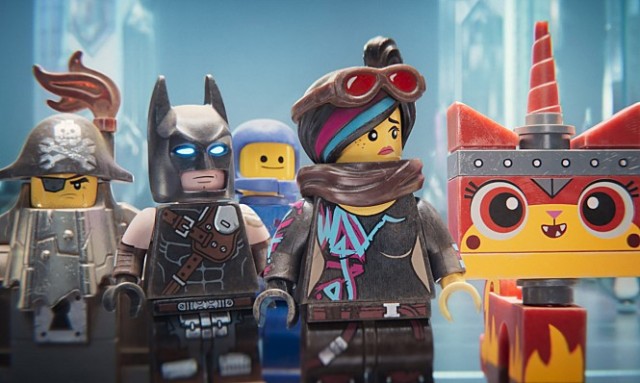 In case of technical aspects, the film is vibrantly colorful as providing some splendid visual moments. While there are a number of action sequences in the film which are as creative and exciting as required, the film sometimes lets us appreciate its fantasy world for a while, and it also remains true to the texture and physicality of Lego blocks just like the previous film. Several songs in the film including “Everything Is Awesome” are effectively utilized along with the score by Mark Mothersbaugh, and you may want to stay during the end credits for getting extra laughs.

While Pratt holds the center with his engaging duo voice performance, the other notable voice cast members of the film have each own moment around him. Elizabeth Banks, Will Arnett, Charlie Day, Alison Brie, Channing Tatum, Jonah Hill, Will Ferrell, and Nick Offerman are as funny as they were in the previous film, and Arnett steals the show again as giving a few uproarious moments to be savored. While Stephanie Beatriz keeps her voice acting as straight as demanded, Tiffany Haddish, who has been more prominent since her breakthrough turn in “Girls Trip” (2017), brings a lot of comic spirit to her character, and you will probably be also delighted by the cameo appearance of a certain famous actor, who acts here more than what he has done during recent years.

Although it is not that awesome compared to the previous film, “The Lego Movie 2: The Second Part” still have enough wit and humor, and director Mike Mitchell, who previously directed “Trolls” (2016), did a competent job on the whole. Because we have gotten a lot more accustomed to the Lego movie franchise thanks to no more than 4 films during last 5 years, I am not so sure about whether the franchise can go further in the future, but who knows? It may surprise us again like it did at the beginning.

This entry was posted in Movies and tagged action, Animation Film, Fantasy, SF. Bookmark the permalink.