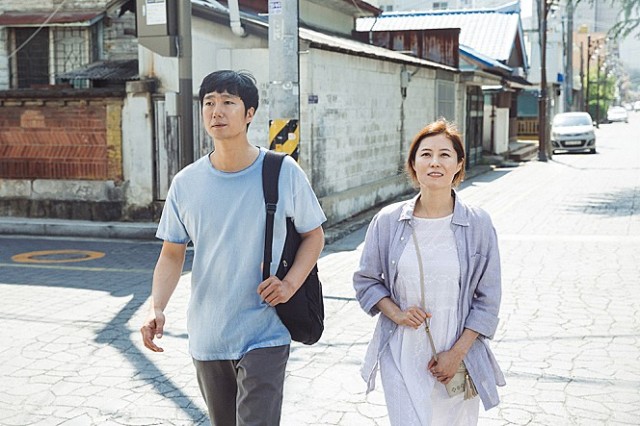 The works of Zhang Lü, who drew my attention for the first time with “Dooman River” (2011), always have a palpable sense of people and locations. While “Dooman River” immersed us into the realistic daily life of Korean Chinese characters living near the border between China and North Korea, “Scenery” (2013) and “A Quiet Dream” (2016) gave us a refreshing perspective on a number of familiar sites in Seoul, and “Gyeongju” (2014) often mesmerized us as playfully wandering around various places in Gyeongju.

In case of Lü’s latest film “Ode to the Goose”, the main background of its first half is Gunsan, a port city which is not that far from my hometown city Jeonju. While revolving around several places in and around Gunsan, the movie alternatively baffles and engages us as freely wandering along with its two main characters, and we become more amused when the movie later delves more into its two main characters’ relationship during its second half.

When we meet Yoon-young (Park Hae-il) and Song-hyun (Moon So-ri) during the opening scene, they have just arrived in Gunsan, and they are looking for a place to stay for a few days. When they happen to have a lunch at a small, modest restaurant, a middle-aged lady, who is the owner of the restaurant, recommends them a nearby inn, but she also tells them that the innkeeper is rather fastidious about guests. 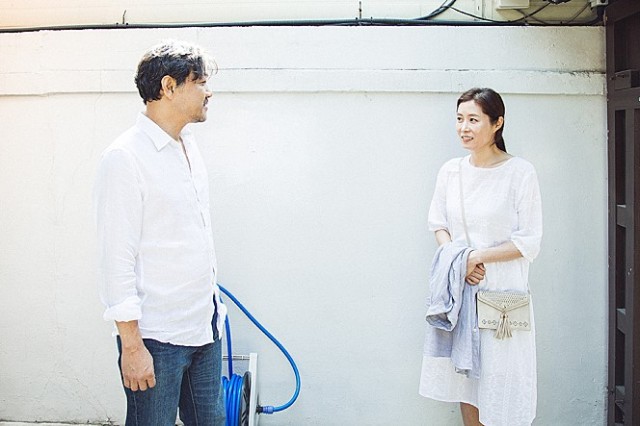 As Yoon-yong and Song-hyun spend some time together around several places in Gunsan, it looks like Yoon-young may get a bit closer to Song-hyun, but, unfortunately, her heart seems to be drawn to someone else, and that is none other than that innkeeper guy. As getting to know the innkeeper bit by bit, Song-hyun finds herself attracted to the innkeeper, and they come to spend more time together after the innkeeper, who turns out to be an amateur photographer, shows her his darkroom and several photographs shot and developed by him.

In the meantime, Yoon-young comes to notice more of the innkeeper’s daughter, who usually stays in her room where she constantly watches whatever is happening in and around the inn via a number of surveillance video cameras. Whenever she appears outside her room, Yoon-young cannot help but curious about this elusive young woman, and it looks like she is also interested in Yoon-young. In the end, they go to an island outside Gunsan together, and we get a rather ambiguous moment as they wander around in the island, but then, for some unknown reason, they find themselves in a problematic situation along with the innkeeper and Song-hyun.

After Yoon-young comes back to Seoul, we meet a few other characters including Yoon-young’s aging father and his Korean Chinese housekeeper lady, and then the movie moves backward to several day ago for showing how Yoon-young happened to go to Gunsan along with Song-hyun. When he came across Song-hyun at a small demonstration site, he did not recognize her at first, but she is pleased to see him again, and she even takes him to her dentist cousin for his toothache problem.

After Yoon-young comes back to Seoul, we meet a few other characters including Yoon-young’s aging father and his Korean Chinese housekeeper lady, and then the movie moves backward to several days ago for showing how Yoon-young happened to go to Gunsan along with Song-hyun. When he came across her at a small demonstration site, he did not recognize her at first, but she is pleased to see him again, and she even takes him to her dentist cousin for his toothache problem.

Song-hyun and Yoon-young meet again later for drinking, and the movie gives us an amusing scene as drunken as those funny moments of Hong Sang-soo’s films. While both of them are quite inebriated, Yoon-young gives an impromptu poem recital in front of everyone including Song-hyun, and that is certainly a showstopper moment to remember in my inconsequential opinion.

I must confess that I am still not that sure about what “Ode to the Goose” is exactly about, but, at least, I observed how it is about with enough interest during my viewing, and I admire its mood, storytelling, and performance. Under Lü’s thoughtful direction, cinematographer Cho Young-jik did a good job of capturing small moments of plain beauty from many different mundane locations in the film, and Park Hae-il and Moon So-ri ably carry the film together while supported well by a number of reliable supporting performers including Jung Jin-young and Park So-dam. Like Lü’s other previous films, the movie is a typical arthouse film which requires considerable patience from you, but it is a rewarding experience at least while also being one of more interesting South Korean films of this year, and I am quite willing to revisit it for appreciating its quiet, sensitive moments again.

This entry was posted in Movies and tagged Romance, South Korean Film. Bookmark the permalink.