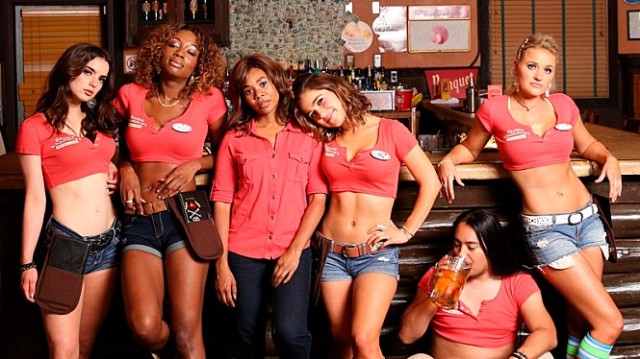 As a little comedy drama revolving around a “sports bar with curves”, “Support the Girls” is more thoughtful and humorous than you may expect. Mainly focusing on one eventful day of its heroine who works at that sports bar, the movie gives us a number of funny moments coupled with some sharp insights to muse on, and the overall result is entertaining enough to forgive its several notable flaws including its rather uneven last act.

When we meet Lisa Conroy (Regina Hall) in the beginning, she is crying in her car for some unknown reason, but then she stops crying and then regains her composure because she is soon going to be pretty busy as the general manager of a sports bar named Double Whammies. Besides doing her usual jobs including managing and checking other employees in this modest sports bar, she has to interview and then educate several young women who want to work there, and she is also going to hold a little fundraising event for one of current employees working under her, though her boss will not approve of that.

Not so surprisingly, things do not go very well right from the beginning. Not long after Lisa starts her working hour at Double Whammies along with other employees including Maci (Haley Lu Richardson) and Jennelle (Dylan Gelula), they hear a cry for help from somewhere, and it turns out that some guy attempted to break into the place for stealing money but then only found himself stuck in a ventilation duct for the whole night. He is subsequently rescued and then arrested by the police, but that process inadvertently damages TV cables around the ventilation duct, and Lisa must take care of this big problem before customers come.

While trying to get TV cables fixed as soon as possible, Lisa gives those new potential employees a brief lecture on how to behave properly around customers, and that is one of the most frank and insightful moments in the film. Clearly recognizing the sexual aspect of their service job, she also emphasizes what is allowed and what is not allowed at all, and she surely makes a good example when she later happens to handle a customer who was rude to one of new employees.

As Lisa busily works on one thing after another, we come to see more of how good Lisa is at handling people around her. When Janelle happens to need a little help from her, Lisa helps her without hesitation, and then she asks Janelle to help her a bit for buying a home theater system at a cheaper price from a nearby store. All Janelle has to do is going to that store along with Lisa for persuading a guy working there, and we accordingly get a small funny moment as that guy eagerly demonstrates the home theater system to Lisa and Janelle.

When Lisa and other employees of Double Whammies begin their fundraising event, the result turns out to be as good as she hopes, but then she finds herself facing another trouble when her boss happens to drop by Double Whammies. As talking more with her boss, Lisa only gets frustrated more than before, and that is the point when the movie takes a sudden narrative turn along with her.

Around that point, the movie loses some of its narrative momentum, but it remains firmly anchored by the strong lead performance from Regina King, a veteran actress who has been mainly known for her notable performances in several popular comedy films including “Scary Movie” (2000) and “Girls Trip” (2017). While deftly handling many humorous moments in the film with flawless comic timing, King brings lots of life and personality to her character, and we come to root for Lisa a lot as watching her trying to cope with her accumulating frustration and exasperation. Although I still remember well that hilarious movie theater scene in “Scary Movie”, the movie shows me an unexpectedly serious side of King’s acting talent, and I certainly wish that we see more of that in the future. 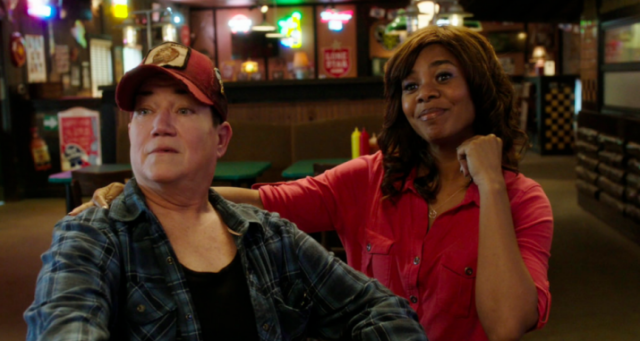 The other main cast members in the movie are also solid in their respective supporting roles. While Haley Lu Richardson, who has been more prominent thanks to her breakthrough turn in “The Edge of Seventeen” (2016), has her own moment when her character entertains her customers while TV cables are fixed, Dylan Gelula gives a number of little deadpan moments to be savored, and I like how they instantly establish a strong sense of sisterhood along with King right from the start. As we observe more of the dynamic interactions among these three good actresses on the screen, the bond among their characters feels more palpable to us, and that is the main reason why the last scene of the movie works well despite a few narrative hiccups preceding that scene. As Lisa’s unlikable boss, James Le Gros gives a small but effective supporting performance, and Lea DeLaria, who has played one of various female prisoner characters in TV series “Orange Is the New Black”, steals the show as a longtime patron of Double Whammies.

“Support the Girls” is directed and written by Andrew Bujalski, who previously made “Results” (2015). I was mildly impressed by that film, but I had a fairly good time thanks to the nice comic performances from Guy Pearce, Cobie Smulders, and Kevin Corrigan, and I accordingly became a little more interested in the filmmaking career of Bujalski, who, according to Wikipedia, has been called the “Godfather of Mumblecore”.

Although I think its last act could be polished more for more fluid narrative flow, “Support the Girls” is still an enjoyable work for many good reasons including King’s lively performance, and I was cheered up a lot by its considerable spirit and optimism. It is ‘flawed’ indeed, but it surely earns its emotional moments, and you will come to cheer for Lisa a lot in the end.

This entry was posted in Movies and tagged Comedy, Sports bar. Bookmark the permalink.