To be frank with you, I could not help but envy the heroine of South Korean-Japanese film “Butterfly Sleep”. As watching her cozy modern house filled with various books, I became curious about those books even though they are written in Japanese, and I amusedly observed what an ideal environment for writing her house is. Insulated from the outside world, her house is shrouded in soothing ambience along with considerable tranquility, and I wish I were writing this review there instead of where I am right now.

In the beginning, the movie shows us the daily life of Ryoko (Miho Nakayama), a middle-aged Japanese author who is working on her latest novel while also teaching a class in some graduate school in Tokyo. Although she has rarely talked about her works in public, but she is now quite willing to talk openly about them, and we see her giving a lecture on one of her works in front of a bunch of students.

After that lecture, Ryoko and several students go to a nearby restaurant for drinking, and that is how she comes across a South Korean student named Chan-hae (Kim Jae-wook), who has worked there for earning the money for his tuition. Their first encounter was brief, but they encounter each other again when Ryoko later comes back to the restaurant for searching for her precious fountain pen, and she soon finds herself more interested in Chan-hae as subsequently getting to know him more.

At first, Ryoko asks him to rearrange the books in her library for bringing some change into the space, and then she suggests to him that he should assist her writing while also taking care of her dog, which has been her sole companion for several years. As a student studying Japanese literature, he is certainly interested in spending more time with her, though his Japanese is not that good enough for typing whatever she dictates to him via her tape recorder. For instance, he makes a rather glaring typing mistake which is quickly noticed by her, and that is one of small amusing moments in the film.

Meanwhile, Chan-hae begins to sense something strange about Ryoko, and he soon comes to know the reason. As revealed to us during an earlier scene where she confesses to her ex-husband, she has been going through the early stage of Alzheimer’s disease, and she is quite determined to finish the novel which is intended to be her last work. After realizing what she is going through, Chan-hae comes to care more about her, and that leads to the inevitable moment of romantic passion between them.

As Ryoko and Chan-hee continue to work on her novel together, the movie gives us several tender and sensitive scenes showing a young couple depicted in her novel. At first, the couple in the novel are happy together as complementing each other, but their bliss does not last that long, and there eventually comes a breaking point for their relationship, which is subsequently followed by a bittersweet moment which achingly emphasizes the irreversible gap between them.

Like the couple in the novel, Ryoko and Chan-hee come to arrive at their own breaking point as she is about to complete her novel. Around that point, her state of mind becomes more deteriorated than before due to the rapid progress of her disease, and she comes to sense that she must do what should be done for him as well as herself, even though she knows too well that he will not understand her decision. 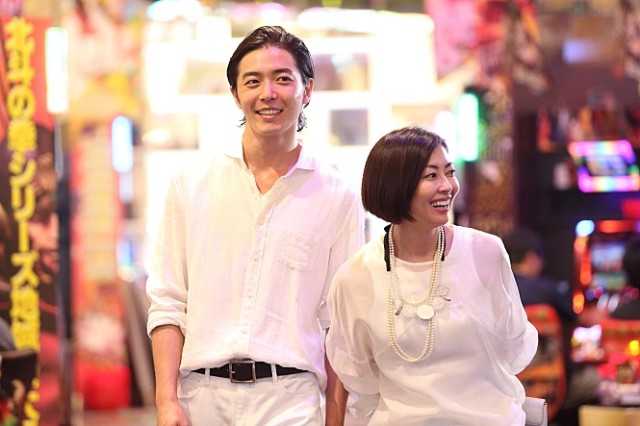 The movie is surely a familiar melodramatic stuff reminiscent of similar films such as “Iris” (2001) and “Still Alice” (2015), but director/writer Jeong Jae-eun handles his story and characters with care and consideration. At one point, the movie makes a little fun of Ryoko’s most famous work which was incidentally inspired by her crumbling relationship with her ex-husband, but it respects her artistic passion and dedication nonetheless, and that is why it is often poignant to watch her struggle to write through whatever is still left inside her mind. Although her relationship with Chan-hae initially looks clichéd, both of them are presented as human characters we can care about, and it is engaging to watch how their relationship is developed along the story.

The lead performers of the movie support the movie well with their good performance. Miho Nakayama, a Japanese actress who has been fondly remembered by many audiences in Japan and South Korea for her charming performance in “Love Letter” (1995), deftly handles a number of obligatory melodramatic moments in the film, and she is fabulous whenever she is required to express a lot of things via her beautiful face. On the opposite, Kim Jae-wook, a South Korean actor who has mainly worked in several South Korean TV dramas, is solid in his understated acting which effectively functions as the solid ground for his co-performer’s showier performance, and, as far as I heard from others, he did a fairly nice job of speaking Japanese with some necessary awkwardness as required.

Although it is not so different from many other neat Japanese melodrama films during recent years, “Butterfly Sleep” distinguishes itself to some degree via its interesting setting and sincere storytelling, and its overall result is both entertaining and touching enough for recommendation. It may be predictable, but this is a well-made movie packed with genuine feelings, and it certainly earns its tears in the end.