“Mission: Impossible – Fallout” did its job as spectacularly and exhilaratingly as we can expect from it. Again, the movie puts its hero into a series of breathtaking action sequences as he and his few trusted colleagues try to accomplish another impossible mission, and it is really fun to watch how deftly it operates within its established plot formula. Although a number of plot turns in the movie will probably not surprise you much if you have seen the previous films, the movie keeps finding ways to amuse and excite us, and the result is another solid entry in a franchise which has been maintained pretty well during last 22 years.

The movie begins with the latest mission of Ethan Hunt (Tom Cruise) and his IMF (Impossible Missions Force) team members Luther Stickell (Ving Rhames) and Benjamin “Benji” Dunn (Simon Pegg). They must prevent a very dangerous terrorist organization from getting plutonium and then making nuclear bombs, but then their operation goes wrong at the last minute, and the plutonium is snatched away from them in the end.

Fortunately, there later comes another chance to stop their opponent, but Hunt and his team face a little problem due to Erica Sloane (Angela Bassett), the new Director of the Central Intelligence Agency (CIA). She is not so pleased about Hunt and his team’s failure, so she has one of her agents included in Hunt’s team despite the protest from Alan Hunley (Alec Baldwin), Sloane’s predecessor who has been the new IMF Secretary since what happened in “Mission: Impossible – the Rogue Nation” (2015).

The agent in question is August Walker (Henry Cavill), and Hunt does not like much him for an understandable reason, but he agrees to work along with Walker anyway because he must get the mission accomplished as soon as possible. They soon get on a military cargo airplane together, and then they jump from the airplane while it is quite high above a certain spot in Paris, where they are going to approach to a powerful black market arms dealer who may lead them to that stolen plutonium.

However, not so surprisingly, the situation becomes very complicated for Hunt and his team members. When Hunt finally succeeds in approaching to the arms dealer despite a few setbacks, the arms dealer demands him to accomplish a mission he is not so eager to accept. Furthermore, he comes across Ilsa Faust (Rebecca Ferguson), a former MI6 agent who previously worked with Hunt in “Mission: Impossible – the Rogue Nation” and turns out to have her own small mission to be accomplished.

What follows after that narrative point is several big action sequences, and they are effectively handled under director/writer Christopher McQuarrie’s competent direction. As shown from “Mission: Impossible – the Rogue Nation”, McQuarrie is a skillful filmmaker who knows how to make good action scenes, and that is particularly exemplified well by a heart-pounding action sequence unfolded on streets and alleys of Paris. Lots of things rapidly happen on the screen during this sequence, but it is never confusing for us at all thanks to the brisk, efficient editing by Eddie Hamilton, and the movie ably dials up and down its level of tension while never overlooking what is being at stake for Hunt and his team members.

And Tom Cruise shows us again that he is one of the most dependable action movie stars in our time. Although he recently had his 56th birthday, he willingly hurls himself into realistic physical actions as usual, and his diligent effort in the film is more than enough for us to forgive his recent disastrous turn in “The Mummy” (2017). He is surely back in his element here in this film, and, as far as I can see from the movie, it looks like he will be able to make one or two more sequels in the future.

Cruise is also supported well by the other performers surrounding him. While Simon Pegg and Ving Rhames are reliable as before, Rebecca Ferguson, who was simply fantastic in “Mission: Impossible – the Rogue Nation”, adds a touch of class to the movie, and Henry Cavill, Alec Baldwin, Angela Bassett, Vanessa Kirby, Sean Harris, and Michelle Monaghan function well in their respective supporting roles.

Mainly because I gave “Mission: Impossible – the Rogue Nation” only three stars and its accomplishment is not surpassed by “Mission: Impossible – Fallout”, so I have no choice but to give the latter three stars, but I must emphasize to you all that, so far, “Mission: Impossible – Fallout” is the best action film of this summer season, and I tell you one little thing about how I watched the movie today. When I walked into a screening room right before the movie began, I was warned that the air conditioner is broken, but I soon came to forget that while being enthralled along with many other audiences around me. Folks, that is what a good blockbuster film can do. 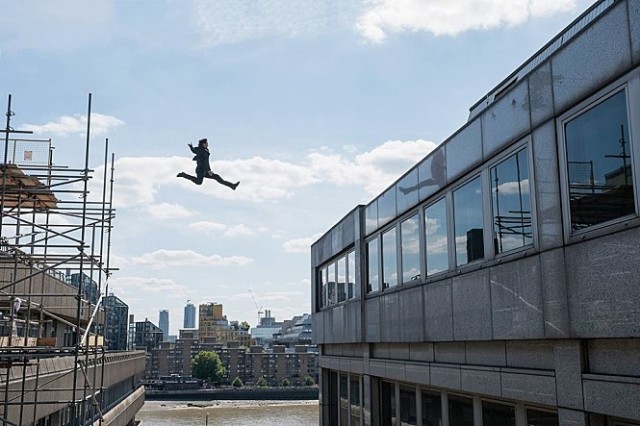 This entry was posted in Movies and tagged action, Espionage. Bookmark the permalink.