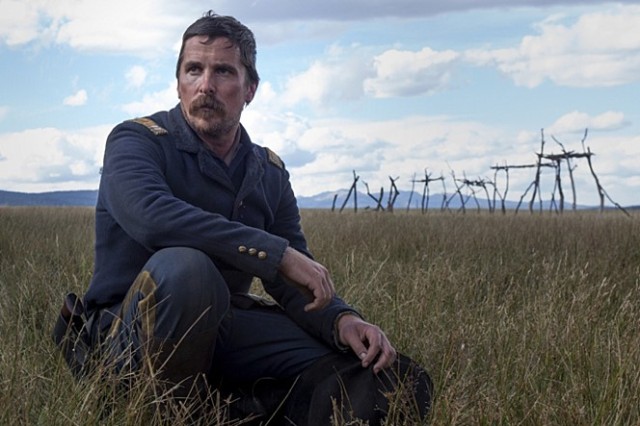 “Hostiles” is a somber but brutal Western drama about a man with the long history of violence and a risky journey he goes through along with a bunch of various figures. Now you get a pretty idea about what you will get from the movie, and it does not exceed our expectation a lot, but it is still an interesting genre piece thanks to its vivid period mood, engaging storytelling, and admirable performance. Phlegmatically observing a wild world which is still violent and ruthless despite the ongoing advance of civilization, the movie gives us a stark moral drama to linger on our mind, and it is often sad and poignant while also tense and melancholic as expected.

After the shocking opening scene in which a family living in a remote area of New Mexico is suddenly attacked by a group of local Native American gangs, the movie shows us another kind of brutality. It is 1892, and the American Indian Wars is almost over, but nothing seems to be changed much for Captain Joseph J. Blocker (Christian Bale) and his men at Fort Berringer in New Mexico. We see them mercilessly handling several Native Americans they have just cornered, and then we observe the helpless and hopeless status of Native American prisoners incarcerated in Fort Berringer.

During his private time at night, Blocker drinks with his old comrade Master Sergeant Thomas Metz (Rory Cochrane), and they come to reflect morosely on their violent past. Although they survived the war, they have been haunted by what they experienced as following orders and trying to survive, and the only possible consolation for Blocker is that he is soon going to get retired.

And then there comes an unexpected order sent directly from the US government. Chief Yellow Hawk (Wes Studi), a Cheyenne war chief who has been incarcerated at Fort Berringer along with his family for several years, is going to be released mainly due to his terminal illness, and Blocker is ordered to escort the chief and the chief’s family to the chief’s native province in Montana. Because he has a bad history with Yellow Hawk, Blocker initially refuses to follow the order, but he has no choice but to follow it, as his direct superior reminds him that he can not only be court-martialed but also lose the pension for his disobedience.

As Blocker assembles his detail for what will probably be his last mission, we get to know a bit about several other members of the detail besides Metz. They are 1) a loyal black soldier who is also a devout Christian, 2) a lieutenant who recently graduated from West Point, and 3) an awkward young soldier who is clearly much less experienced than other members of the detail. It goes without saying that they are your average stock supporting characters, but they are presented with distinctive personality at least, and the same can be said about other supporting characters including Yellow Hawk’s family members, who are depicted with care and respect even though they are usually put in the background.

As going through the first day of his mission along with others, Blocker shows no mercy or consideration to Yellow Hawk and his family, but he soon comes to see that he and his old enemy should stick together for a while during their increasingly perilous journey. There is always the possibility of danger around their long route, and that aspect is exemplified well by when they and others get caught off guard by a sudden ambush at one point.

Meanwhile, Blocker and his soldiers encounter Rosalee Quaid (Rosamund Pike), a young widow who has been quite devastated since she lost her whole family during that Indian attack shown in the opening scene. While she still struggles to process what happened to her, she slowly begins to recover as being under the protection of Blocker and his soldiers, and we subsequently see the possibility of romance between her and Blocker, though they are later reminded again of how harsh their world can be. 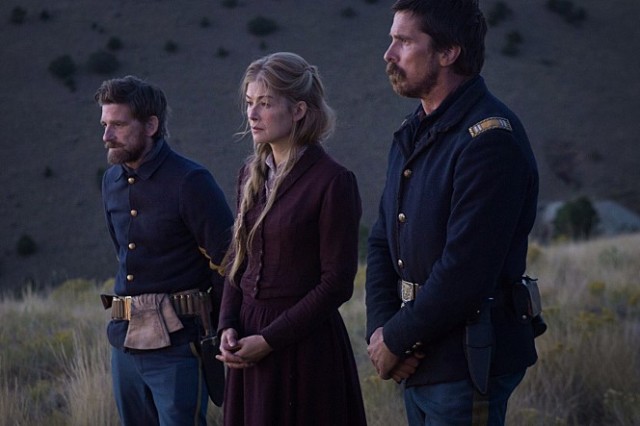 Leisurely rolling along with its characters, the movie continues to dole out nice individual moments, and we are accordingly more absorbed into its characters’ journey. There is a welcoming moment of respite when they drop by a fort in Colorado, and then it is followed by a bitter moment of irony when Blocker comes to escort a prisoner with whom he once fought during the war. The mood becomes a little more peaceful around the expected end of the journey, but then, not so surprisingly, there comes another harsh dose of reality, and Blocker comes to face more of his dark side.

As the master of intense stoicism, Christian Bale is perfectly cast in his lead role, and director Scott Cooper, whose screenplay is based on the manuscript of late Donald E. Stewart, surrounds Bale with a heap of good performers. While Rosamund Pike is convincing in her character’s dramatic arc along the story, Wes Studi effortlessly imbues his character with serene dignity, and the other notable supporting performers including Rory Cochrane, Jesse Plemons, Adam Beach, Q’orianka Kilcher, Timothée Chalamet, Peter Mullan, Ben Foster, Stephen Lang, Bill Camp, and Scott Wilson are also fine in their respective supporting roles.

Although it is a little too long in my inconsequential opinion, “Hostiles” handles its genre elements well enough to engage us during its journey, and I enjoyed its excellent technical aspects including the crisp cinematography by Masanobu Takayanagi and the moody score by Max Richter. Yes, this is surely a familiar genre stuff, and it did its job as well as required, and I do appreciate that.