Calmly isolating itself within its small solitary background, South Korean independent film “Eyelids” presents an austere but haunting poetic requiem for the victims of one horrible incident which shocked the whole nation a few years ago. Although the incident in question is briefly mentioned only once in the film, that is more than enough for me and other South Korean audiences, and the deep sadness glimpsed from the final scene of the movie lingered on me for a while as I walked out of the screening room.

The movie mainly revolves around the ascetic daily life of an old man who has lived alone in a remote sea island. While not revealing much about himself, the old man silently leads a self-sufficient life in his isolated nature environment, and that reminds me of similar isolated nature environments shown in several notable works of Kim Ki-duk such as “Spring, Summer, Fall, Winter… and Spring” (2003).

As slowly getting us accustomed to its hero’s small world, the movie gradually reveals his main job. Not long after the phone in his shabby house rings at one point, an angler comes to the island, and the old man is ready to prepare a piece of rice cake for the angler, who turns out to be a recently diseased man and is soon gone from the island once the rice cake is ready for him.

Now this sounds pretty preposterous to some of you, but the movie keeps its attitude straight as before. Although still not explaining anything to us, it engages us via its vivid natural atmosphere and some interesting things to observe, and we come to accept the unrealistic aspects of its premise. While I was amused a bit by several animals in the island including a black goat who seems to be under the old man’s care, I observed a few abandoned small stone statues with curiosity, and I liked how one of these stone statues is effectively used for dramatic purpose later in the movie. 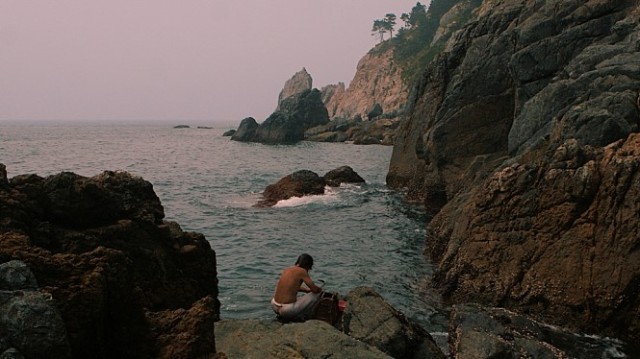 The mood becomes a little tenser when a storm comes, and then the old man hears a tragic news from his radio. A ferry ship named Sewol was sunken at a spot not so far from the island, and the old man is visibly agitated by that. Not long after the news came out, a rat comes into the island, and then there also comes a mysterious red suitcase. When the old man brings the suitcase to his house and then opens it, we only see water inside it, but the old man seems to feel something else from it. He tries to ignore the suitcase, but it constantly draws his attention nonetheless, and he feels exasperated because of that.

And then there comes a young teacher and her two students, who apparently represent many unfortunate victims on that ferry ship. Like that angler who came before them, they wait for rice cake to be served to them, but, alas, the situation becomes not so good for the old man due to one accidental reason, and that results in more frustration and exasperation for him.

In the end, the movie strikes us hard with its final sequence, and that made me reflect again on how horrible that real-life sinking incident was. When the sinking of Sewol was reported in the morning of April 16th, 2014, the situation seemed to be under control at first, but then it turned out that many passengers on the ferry ship were drowned mainly due to the incompetent handling of the situation by President Park Geun-hye and her corrupt government. After she was eventually impeached and then sent to a trial in early 2017 thanks to our mass public demonstration, we came to learn more of how ineffectual and irresponsible she and her government were during that time, and I must tell you here that I do not have any pity on her imprisoned status at present.

The movie is written and directed by Meul O, who previously impressed me with “Jiseul” (2012). Although I was initially not as enthusiastic about that movie as other critics because of its glacial narrative pacing and minimalistic storytelling, I admired how thoughtfully and beautifully it handles the tragedy of the Jeju Uprising in 1948, and I appreciated its strong elements more during my second viewing. In fact, I later added it to my list of notable South Korean films of 2013, and it is certainly one of those good films I am willing to re-evaluate someday.

Compared to “Jiseul”, “Eyelids” is relatively modest in comparison, but it is still an interesting work accompanied with several good things to admire. Besides working as the editor of his movie, Meul O also worked as one of the co-cinematographers of the movie, and he gives us a number of stunning shots of unadorned natural beauty. I particularly remember well one brief shot of sea urchins slowly moving together, and I am still tickled by several funny moments associated with that rat.

Although it was shown at the Busan International Film Festival in late 2015, “Eyelids” had been somehow held in limbo for next several years, and I am glad that it finally gets a chance for more audiences in South Korea during this week. Although I am not that sure about whether it will work as well as for the audiences outside South Korea, the movie fulfills its purpose while also working as a solid arthouse film to be admired for its mood and poetic beauty, so I guess the audiences outside South Korea can also appreciate its achievement just like me and other South Korean audiences. Yes, it surely requires considerable patience as your typical ‘slow film’, but you will not easily forget it after watching it.

This entry was posted in Movies and tagged South Korean Film. Bookmark the permalink.