Closely looking at a group of ordinary brave men struggling in the middle of the civil war in Syria, “Last Men in Aleppo” gives us a bleak but undeniably gripping experience accompanied with growing anger and sadness. As we watch them trying to do their risky job for many others in their city, the documentary gradually immerses us in their harsh, unstable reality filled with danger and despair, and we come to admire their bravery and resilience as reflecting more on what is going on in Syria.

After its gloomy main title scene featuring a few goldfishes, the documentary briefly gives us a bit of background information. When an uprising began in Syria in 2011 as a part of the Arab Spring movement, President Bashar al-Assad’s regime tried to crush this uprising via violent tactics, and that eventually led to a civil war which is still continued even at this point. As the conflict between the Syrian government and the rebels was more intensified, several cities in the rebel-controlled region became constant targets to be bombarded by the Syrian Arab Air Force and the Russian Air Force (as many of you know, Vladimir Putin has been one of al-Assad’s main backers), and Aleppo has been one of these unfortunate cities.

Mostly shot in Aleppo over a period spanning from 2015 to 2016, the documentary presents its story via two different men who are the members of the Syrian Civil Defense. Also known as the White Helmets, the Syrian Civil Defense mainly consists of civilian volunteers working in Aleppo and several other war-torn cities in Syria, and, as shown from this documentary as well as Oscar-winning documentary short film “The White Helmets” (2016), their main job is urban search and rescue in response to bombings. Whenever bombing happens, they are usually the ones who come first for saving people, and their extraordinary examples of human courage have drawn lots of attention from the world outside. 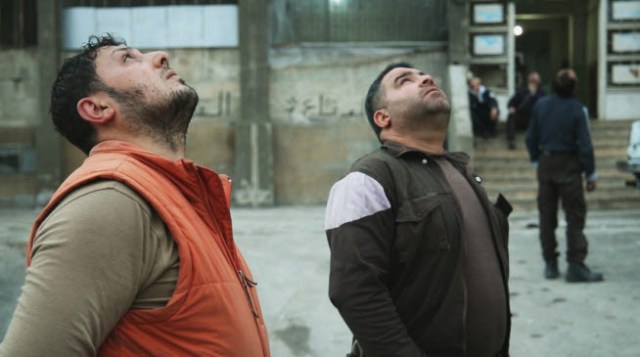 When one of two heroes in the documentary is introduced to us, he is nervously looking up to the sky along with his colleagues. His name is Khaled, and we soon see this plain stocky guy riding a vehicle along with others right after a loud sound of explosion is heard from somewhere. Another air strike has just happened in their city, and they must go to the site of bombing as soon as possible.

After this urgent moment, we observe Khaled spending some time with his two daughters (his wife is never shown in the film although she is mentioned from time to time, by the way). While not fully grasping what their father does outside, Khaled’s daughters are very proud of their father, and they watch a video clip showing Khaled rescuing a child amid the rubbles of a bombing site.

For Khaled, that moment was just one of many dangerous and difficult incidents he and his colleagues had to deal with. While they sometimes have small moments of fun, there is always the possibility of another air raid, and the situation around them and others in the city remains despairing as before. As reflected by one brief scene showing Khaled’s visit to a local pharmacy, the city has suffered from the shortage of many things including medicines, and Khaled certainly worries a lot about his daughters. He considers going to Turkey just like many people of his country did, but he cannot imagine himself living his hometown, even though the circumstance becomes more frustrating for him and his colleagues. At one point, they make a small garden for several goldfishes he bought, and we cannot help but notice a sad parallel between them and goldfishes. 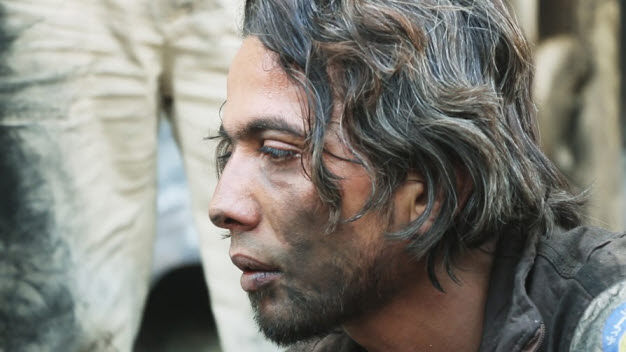 The other hero of the documentary is Mahmoud, a quiet, decent young man who is also determined to stay in the city as much as he can. When we see him for the first time, he is driving his vehicle to a bombing site, and then we observe him and others working together for rescuing several children buried below heaps of rubbles. While they cannot save everyone, they manage to save two of them at least, and there is a poignant scene where Mahmoud and one of his colleagues visit two surviving kids and their father. As the kids’ father shows his gratitude to Mahmoud and his colleague, one of two surviving kids asks Mahmoud to tell how Mahmoud rescued him, and Mahmoud comes to feel rather awkward. As he later says to his colleague, he simply wanted to know more about those dead children they could not save, and we can clearly see that their death still feels painful to him.

Mahmoud often works with his younger brother, and they have been hiding their work from their dear parents (They lied to their parents that they work in Turkey). Mahmoud has been concerned about his brother’s safety, and there is a tense moment when they find themselves in a sudden peril. They luckily come back alive, but, as shown from a brief subsequent scene, Mahmoud is apparently shaken by what he and his brother have just gone through, and that adds more burden to whatever he has kept to himself.

While it is quite difficult to watch at times as Khaled, Mahmoud, and other White Helmets keep struggling under their increasingly daunting situation, “Last Men in Aleppo”, which won the Grand Jury Prize at the Sundance Film Festival early in this year, firmly holds our attention via its strong sense of immediacy and intimacy generated through its cinéma vérité approach. It is pretty clear that director Firas Fayaad and his crew took considerable risk while shooting their documentary in Aleppo, and I appreciate how the documentary maintains its sober attitude while never falling into sensationalism even during its most ghastly moments. This is a very tough stuff indeed, but its vivid presentation of the best and worst sides of humanity is powerful to say the least, and I think you should not miss this remarkable documentary. 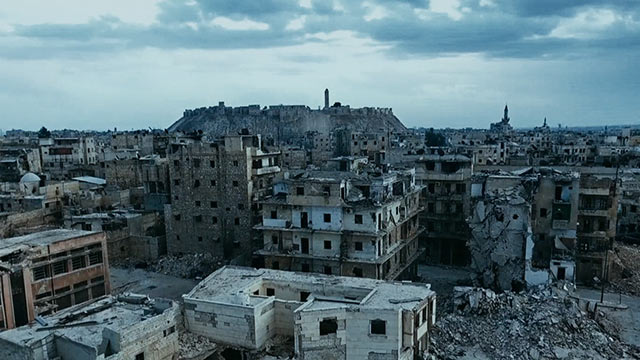 This entry was posted in Movies and tagged Documentary, War. Bookmark the permalink.