“Dunkirk”, an ambitious World War II movie directed by Christopher Nolan, instantly grabs us right from its first moment and then never loses its grip on us till the end credits. Although looking rather modest compared to Nolan’s previous works, the movie is equally bold and compelling in its attempt to present a big, vivid visual recreation of Dunkirk Evacuation, and it did a supreme job of taking us into that critical historical moment via first-rate filmmaking techniques and efficient storytelling.

At the beginning, the movie presents its three fictional narratives one by one after giving us a brief description of how the circumstance became quite bad for the Allies in May 1940. Not long after the German Army invaded Netherlands, Belgium, and France, a large number of Allied soldiers, mainly consisting of British and French soldiers, were surrounded by the German Army while virtually trapped in the seaside areas of Dunkirk, France, and they had no choice but to wait for ships which would come to rescue them, as the German Army approached closer to them day by day.

In “the Mole”, that desperate situation is presented mainly through a young British solider played by Fionn Whitehead. When he manages to arrive in a beach area of Dunkirk after going through one precarious moment, there are already thousands of soldiers waiting for evacuation on the mole and the surrounding beach, and they are also frequently attacked by German fighter planes swooping down on them. He and other soldiers try to get out of Dunkirk as soon as possible, but they only find themselves in more danger and desperation, and there is some horrible absurdity in how they get stuck in Dunkirk again and again during several days of their despairing struggle. 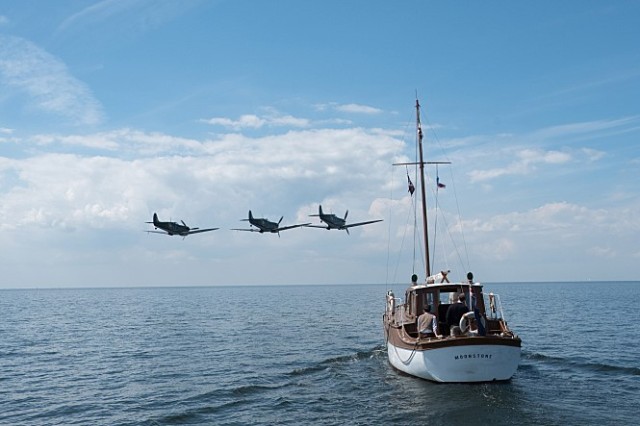 In “the Sea”, we meet a middle-aged British civilian played by Mark Rylance, and this part focuses on one eventful day that man goes through. When his pleasure craft is requisitioned for Dunkirk Evacuation along with many other small ships, he willingly sails his ship for himself, and his son and his son’s friend join him for giving any possible help. As they get closer to Dunkirk, imminent danger becomes more palpable with British fighter planes passing above them in the sky, but he remains unflappable while more aware of what should be done.

In “the Air”, the movie depicts a short but very risky time period experienced by a British fighter plane pilot, who is played by Tom Hardy. He and his fellow pilots are ordered to prevent German fighter planes from attacking ships and soldiers, and everything looks mostly fine as they depart from England, but, of course, the circumstance soon becomes quite dangerous as they come across their opponents.

As dexterously going back and forth between these three temporally different narratives, Nolan’s screenplay succinctly establishes the historical background surrounding the characters in the movie and then steadily dials up the level of tension along with the constantly ticking sound from Hans Zimmer’s occasionally overpowering score. This is sometimes quite grueling to watch, but the movie keeps firmly holding our attention as thrusting us into several grimly striking sequences including the one starting with a sudden torpedo attack, and we become more involved in the characters’ urgent situations while sensing more of fear and chaos felt by them.

The technical aspects of the movie are exemplary. Editor Lee Smith deserves to be praised for his lean, precise editing, and he and Nolan always make us hold onto the multi-narrative structure of the movie while never confusing us at all. Watching how the movie smoothly juxtaposes different time points for dramatic effects, you may be reminded of their phenomenal achievement in “Inception” (2010), and Nolan and Smith dazzle us with another superb cinematic juggling act here. As he did in his recent films, Nolan shot the movie in 70mm IMAX film, and cinematographer Hoyte van Hoytema, who previously collaborated with Nolan in “Interstellar” (2014), impresses us with many visually astounding moments to be appreciated in IMAX screening room. When I watched the movie at a plain local movie theater, I frequently felt the urge to watch it again at an IMAX theater – and I will certainly do that as soon as possible.

The performers in the film fill their functional roles as required while never drawing too much attention to themselves. Although notable performers like Kenneth Branagh, Cillian Murphy, Tom Hardy, and Mark Rylance are certainly recognizable from the start, but they are naturally mingled with other performers in the movie as functioning as key plot elements to engage us. While Hardy gives a competent performance even though his face is mostly covered by an oxygen mask throughout the film, Rylance effortlessly exudes his character’s human qualities, and Fionn Whitehead is also solid as holding his place well at the center of the movie.

Since his breakthrough film “Memento” (2000), Christopher Nolan has intrigued and entertained us with several memorable works including the Dark Knight trilogy, and, considering its top-notch technical aspects, “Dunkirk” is another grand achievement to admire. He confidently goes all the way for what he wants to achieve, and the result is one of the best films during this summer season.