“The Mummy”, a reboot of the Mummy series which is also the first installment in the Dark Universe film series of Universal Studios, is dour, bland, and joyless while not proving anything particularly fun or scary. This unexciting blockbuster product merely exists for whatever will come next as planned by Universal Studios, and it only gets worse in its lumbering steps even when you hope for any possible improvement.

Like the 1999 film of the same name, the movie gives us a long obligatory expository sequence unfolded in the era of, yes, ancient Egypt, and then the movie promptly moves forward to the present era as introducing Nick Morton (Tom Cruise), an American soldier who has looked for a big opportunity along with his sidekick Chris Vail (Jake Johnson) in a desert region around Mosul, Iraq. Officially, they come into this dangerous area riddled with ISIS fighters for a reconnaissance mission, but their private purpose is finding some ancient site which may contain valuable artifacts they can take and then sell later, and Morton does not hesitate at all although the site in question seems to be located in a small village which happens to be occupied by a bunch of ISIS fighters.

Not long after they manage to survive their clash with ISIS fighters and the subsequent drone strike, an underground tomb is revealed, and an archaeologist named Jenny Halsey (Annabelle Wallis) comes to the site along with Colonel Greenway (Courtney B. Vance, who is criminally under-utilized here). Because Morton stole the information about the location of the tomb from her, Halsey is certainly not so pleased to meet him again, and neither is he.

Anyway, she and Morton soon go down inside the tomb along with Vail for investigation, and then they come upon a mysterious sarcophagus hidden inside the tomb. Halsey decides to take it to London, but, not so surprisingly, the sarcophagus in question is not just an invaluable artifact but something quite dangerous, and Morton and Halsey belatedly come to realize that when they are on a cargo plane along with it.

As already shown from the aforementioned expositive sequence, the sarcophagus contains Princess Ahmanet (Sofia Boutella), who was mummified alive around 5,000 years ago but is still quite alive. When her father came to have a male heir to succeed him instead of her, she made a deal with God of death and became an immortal entity with four pupils (don’t ask me whether that physical change can improve eyesight or anything else), but her attempt to usurp the throne and then have her god come into the human world was eventually thwarted by priests, and that was how she came to be locked inside that tomb.

After making the cargo plane crash down to a rural region outside London, Ahmanet quickly embarks on her old unfinished business. For restoring her physical shape, she sucks life force out of many unfortunate victims who are subsequently turned into withered zombies under her control, and this may make some of you a little nostalgic about Tobe Hopper’s “Lifeforce” (1985), which incidentally features a female supernatural entity who also sucks life force out of her victims and then turns them into similarly withered zombies.

After miraculously surviving the crash unlike others on the plane, Morton and Halsey become more aware of their urgent circumstance as confronting Ahmanet, who sets her eyes on Morton and is going to sacrifice him as the vessel for her God. Marked right from his first encounter with her, Morton often finds himself under Ahmanet’s influence, and he also sees his dead sidekick at times, who is cursed just like Morton while being as wisecracking as that dead friend of the hero of “An American Werewolf in London” (1981). 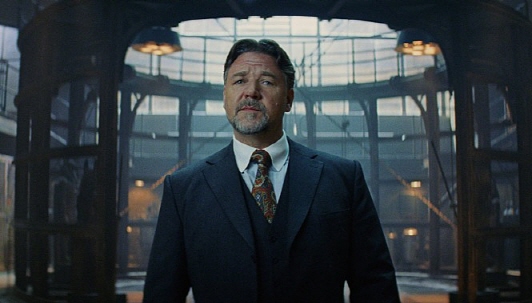 Fortunately, Halsey knows someone who may help them. I am not sure about whether I can reveal who that is here in this review, but I think I can tell you instead that 1) he is played by Russell Crowe as shown from the trailer of the movie, 2) you will instantly see something hidden behind his character mainly because he has been one of the most famous horror literature characters, and 3) I enjoyed to some degrees how Crowe handles his scenes with some gusto as the only performer in the movie who seems to be having any real fun.

When the movie eventually arrives at its climax, it continues to be disappointing as before. As it hurriedly moves from one place to another with lots of actions and special effects, the movie frequently loses its footing in terms of narrative and character, and it does not have enough urgency to hold our attention. The screenplay by director Alex Kurtzman and his co-writers Christopher McQuarrie and Dylan Kussman, which is based on the story written by Kurtzman, Jon Spaihts, and Jenny Lumet, frequently feels heavy-handed and half-baked, and that is particularly evident from how the movie constantly and blatantly emphasizes that Morton is basically a good guy in his heart.

Tom Cruise and Annabelle Wallis try as much as they can do, but their flat, mediocre characters have no chemistry between them on the screen. As the title character of the movie, Sofia Boutella is adequate, but there are not many things she is allowed to do, and I do not think the movie will boost her career as much as “Wonder Woman” (2017) is currently catapulting Gal Gadot’s. In case of Jake Johnson, he is evidently cast as a comic relief, but the movie does not seem to know what to do with his character, and he is accordingly wasted as much as many of his co-performers.

As feeling depressed more and more during the early morning screening of “The Mummy”, I found myself wistfully reminiscing the goofiness of the 1999 film and its two subsequent sequels. Sure, I laughed at their many corny, ridiculous aspects, but they were not entirely without amusement and entertainment at least. Maybe I should watch any of them right now for getting less depressed.

This entry was posted in Movies and tagged action, Fantasy, Mummy. Bookmark the permalink.