Shrouded in the gnawing sense of dread and terror, “The Witch” will give you a creepy experience as calmly observing how its characters are slowly crumbled under an unknown influence out there. When it is over, you may wonder about what exactly happened to them, but you will not easily forget its spooky atmosphere enfolding several chilling scenes to disturb and frighten you.

It is around the 17th century, and the opening sequence shows William (Ralph Ineson) and his family being banished from their puritan community located somewhere in the New England region. Although the reason for their banishment is not specified well, it is implied that there was some theological conflict between William and town elders, and William stubbornly sticks to his belief, even though he could compromise with town elders for avoiding the hardships he and his family will have to face once they leave the community.

Along with his wife and their five children, William moves to a remote spot far away from the community. As looking at a new settling place for them, he and his family try to be optimistic while hoping for God’s blessing, but the forest surrounding this place suggests otherwise to us via its moody presence, and this is further amplified by Mark Korvan’s unnerving dissonant score, which often sounds like a malicious vibe generated from somewhere inside the forest.

Not long after the family settles in their new place, a bad thing happens as expected. William’s youngest child is suddenly vanished on one day, and William’s neurotic wife Katherine (Kate Dickie) is devastated by this incident while William’s eldest daughter Thomasin (Anya Taylor-Joy) is baffled about it. She can swear by God that her little baby brother was right in front of her eyes during their very last moment, but then he was gone without any trace right after that point, and she knows too well that her grieving mother is blaming her for that.

As William says to his eldest son Caleb (Harvey Scrimshaw) during their private moment, the baby seemed to be snatched away by a wolf or some other predatory animal in the forest, but then the family becomes more conscious of the possibility of evil force hovering around their place. There is a ghastly scene involved with an unspeakable case of witchcraft, but we are not so sure about whether this is real or imagined. Twin siblings Mercy (Ellie Grainger) and Jonas (Lucas Dawson) look innocuous and mischievous as playing with their family black goat, but they may know more than they tell to other family members. Do they merely imagine things just for fun? Is there really an evil witch lurking somewhere in the forest?

Regardless of what is really happening to the family, the strained relationships among them become more palpable than before as days go by. As the approaching winter time looks gloomy for his family due to their disappointing harvest, William has to confront the price of his pride, and he also has to hide a few things from his wife, who has many things to be bitter about besides the unfortunate loss of her baby son. Both Thomasin and Caleb are well aware of the growing conflict between their parents, but they have no choice but to be dutiful children as well as dependable older siblings in their isolated world – until a certain point.

Under the skillful direction by the first-time director Robert Eggers, the movie keeps accumulating tension step by step as more disturbing things happen later in the story. While there are a few ‘boo!’ moments to jolt us in the progress, their shocks are organically sprung out of the tense ambience established in advance, and we come to fear more for what may happen next. 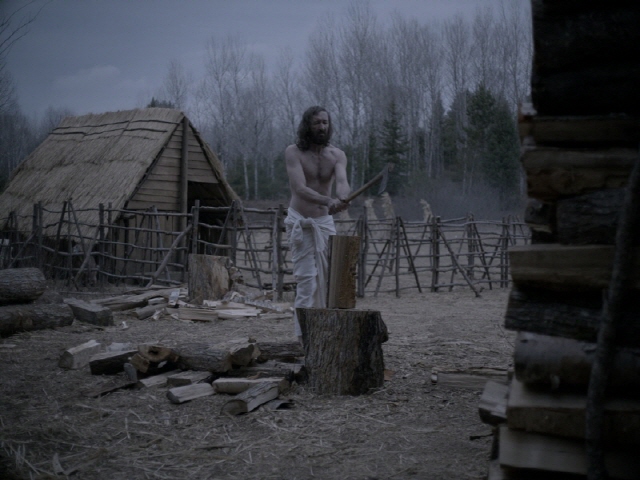 Eggers and his crew did a commendable job of creating the authentic period background in spite of their small production budget, and we are immediately drawn into its 17th century world and then involved in its characters’ fearful situation. The cinematography by Jarin Blaschke is hauntingly beautiful for the superlative use of natural lights reminiscent of “Barry Lyndon” (1975), and the screen ratio of 1.66:1 in the film is effectively utilized especially when the camera looks into the gray dense parts of the forest, which feel claustrophobic with those dark, tall trees exuding inauspicious overtone on the screen.

As mentioned in the end credits, Eggers’ screenplay is mostly based on various writings from its background period, and some of its intense dramatic moments will probably remind you of the Salem Witch Trials or Arthur Miller’s classic play inspired by that infamous historical incident. While desperately holding onto their religion in front of the situation they do not fully understand, the characters in the film become far more susceptible to suggestions and superstitions, and, not so surprisingly, there comes an imploding moment for everyone after one of William’s children gets unhinged by whatever was experienced in the forest. The main cast members in the film are convincing in their unassuming natural performance, and they also handle well their demanding scenes as their characters are pushed into the grim mouth of madness – or damnation, perhaps.

While clearly influenced by “The Exorcist” (1973), “The Shining” (1980), and “The Blair Witch Project” (1999), “The Witch” has its own scary goodies to present and you will enjoy it especially if you appreciate that precious value of mood and suspense in horror films. Considering its characters’ increasingly unreliable viewpoint, I am still not that certain about its final minutes, but I was instantly gripped by its uneasy aura of darkness as admiring its visually impressive scenes, and I was chilled by its genuinely frightening moments. A good horror film is not something we come across often in these days, and “The Witch” is certainly one of a few better cases we have in this year.

This entry was posted in Movies and tagged Christianity, Family, Horror, Puritan, Witch. Bookmark the permalink.