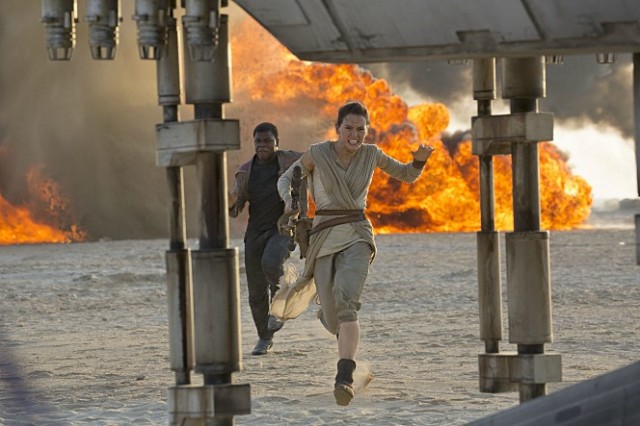 “Star Wars: The Force Awakens” attempts to bring the Force back in action, and it did a mostly successful job with its entertaining mix of old and good things. While it does not reach to the groundbreaking level of the original trilogy of the franchise, the movie is one or two steps up from the prequel trilogy which was a mixed bag on the whole, and it confidently places itself in the continuing saga as opening the door to more things to come in the next following years.

Although the Galactic Empire was defeated three decades ago as shown in “Star Wars: Return of the Jedi” (1983), the galaxy of the Star Wars series soon becomes threatened by another force of darkness. After rising from the remnants of the Galactic Empire, the First Order becomes a huge, mighty threat to the whole galaxy, and the Resistance has been struggling against the First Order for years while the situation becomes more desperate for the Resistance and its supporters around the galaxy.

After the opening part in which Max von Sydow appears in a minor supporting role, we are introduced to two new characters who will be at the center of “Star Wars: The Force Awakens” and its two upcoming sequels. Rey (Daisy Ridley) is an orphan lass who has earned her meager living as a metal-scrap scavenger in a barren desert planet called Jakku (imagine Tatooine with only one sun), and, as it happened to Luke Skywalker (Mark Hamill) in “Star Wars: A New Hope” (1977), she accidentally comes across something which is going to change her life forever. It is a BB-8 droid which belongs to a Resistance fighter named Poe Dameron (Oscar Isaac), and what it is currently guarding inside itself must be delivered to the Resistance before the First Order grabs it first.

When Dameron was captured by the Stormtroopers and their ruthless warrior commander Kylo Ren (Adam Driver), Kylo Ren ordered his soldiers to massacre innocent people who unfortunately happened to be on the spot, and one of the Stormtroopers became conflicted as watching these brutal killings swiftly carried out by his comrades. After eventually crossing over the line, Finn (John Boyega from “Attack the Block” (2011)) soon finds himself getting involved with Rey, and that is the beginning of their precarious adventure.

The rest of the story feels formulaic to you especially if you are familiar with the previous Star Wars films, but the director J.J. Abrams, who also wrote the screenplay with Lawrence Kasdan and Michael Arndt, keeps the narrative momentum intact as peppering the film with a number of exciting action sequences. The score by John Williams (welcome back, Maestro!) soars as a certain recognizable space vehicle flies high across the screen for another action during one action sequence, and it is thrillingly unfolded around some ruins from the past. While everything usually happens quick and fast during this and other action sequences, J.J. Abrams is a skillful director who knows how to hold our attention amidst lots of bands and crashes, and we are never detached from its infectious sense of fun and adventure.

Abrams also pays considerable attention to many wondrous details evoking that bountiful fantasy aspect of the Star Wars films. We see several different planets with each own environment, and we meet various kinds of alien or robot creatures including Maz Kanata (Lupita Nyong’o), a wise old alien who knows one or two things about the Force although she is not a Jedi. We also meet the characters from the original trilogy including Han Solo (Harrison Ford), Princess Leia (Carrie Fisher), Chewbacca (Peter Mayhew), C3-PO (Anthony Daniels), and R2-D2, and there are also numerous references to the original trilogy, some of which will amuse many Star Wars fans (My favorite is the one associated with that trashy claustrophobic scene in “Star Wars: A New Hope”, by the way). 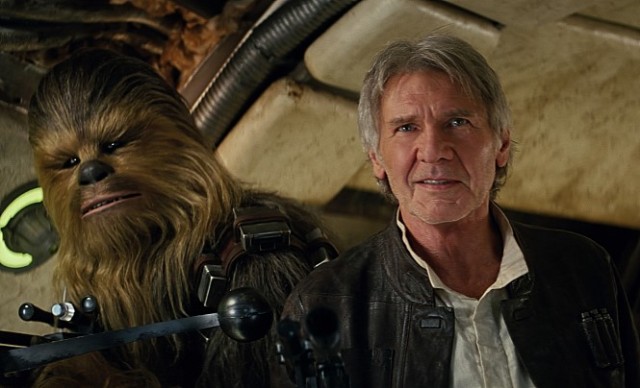 Of course, many of these things are nothing new in these days thanks to not only the immense popularity of the franchise but also the vast advance of special effect technologies, but “Star Wars: The Force Awakens” is imbued with new potentials to intrigue us. While hurling themselves into actions with lightsaber or blaster, Rey and Finn are presented as engaging characters we come to root for, and the changes they respectively go through during their adventure add complexity and diversity to their archetype characters. While Harrison Ford and Carrie Fisher dutifully fill their spots as demanded, Daisy Ridley and John Boyega give strong commendable performances as our heroic characters who are both familiar and fresh in each own distinctive way, and Oscar Issac is also solid as another major new character in the film. Although Chewbacca is as monotonous as before, C-3PO and R2-D2 are welcoming as usual, and I also like BB-8, which rolls around here and there like a big billiard ball as impressing you with its several little surprises (My small question: how can it climb up stairs or mountainous routes, I wonder?).

In case of the villains, they are not as overwhelming as Darth Vader in spite of their super-duper gigantic main station (Another question: is its intergalactic laser blast faster than the speed of light?), but I guess we will see more of their dark side later. Although his face is usually covered by his dark helmet, Adam Driver is more like petulant Anakin Skywalker than Darth Vader, and that seems to be an appropriate acting choice for a character with some serious anger management issue to deal with before further embracing the dark side. As another key figure of the First Order, Domhnall Gleeson virtually chews a grand scene reminiscent of “Triumph of the Will” (1935), and Andy Serkis is an insidious evil master ruling over the First Order. In case of the Stormtroopers in the movie, they remain just the same as the inefficient and expendable time-honored extras of this space opera universe, and I guess it is still so hard to get good help around the galaxy even in these days. I am glad that Finn made a right career choice for him as well as the galaxy.

While it is a pleasure to see how the beloved franchise is energized by new spirit and materials, “Star Wars: The Force Awakens” still stays in the areas we have encountered before, and that is why I have some reservation on the future of the franchise. Sure, the movie is enjoyable, but it is also often predictable in terms of story and characters, and I will not be surprised if the variation of that infamous line in “Star Wars: The Empire Strikes Back” (1980) appears in the next film. I do not deny that the movie is good as much as we expected for a long time, but, folks, I usually prefer a surprise to long expectation as your average seasoned moviegoer.

So, will its imminent box office success possibly lead us to something as special or memorable as what we experienced from the original trilogy? All I can say at present is that we have a new hope sprouted from its old familiar world as it strikes back and we are assured of the return we all have been waiting for. May the force be with whatever follows after this. 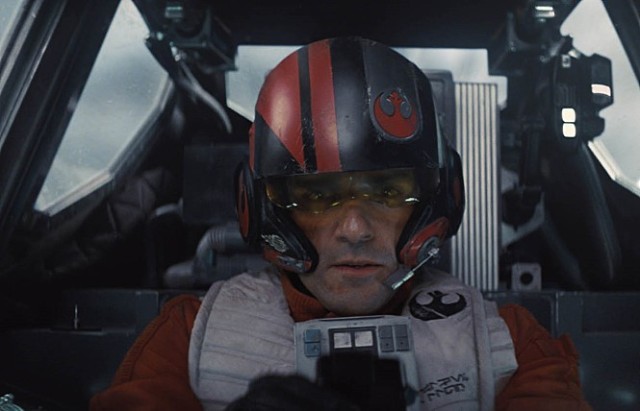 This entry was posted in Movies and tagged action, Family, Fantasy, SF, War. Bookmark the permalink.