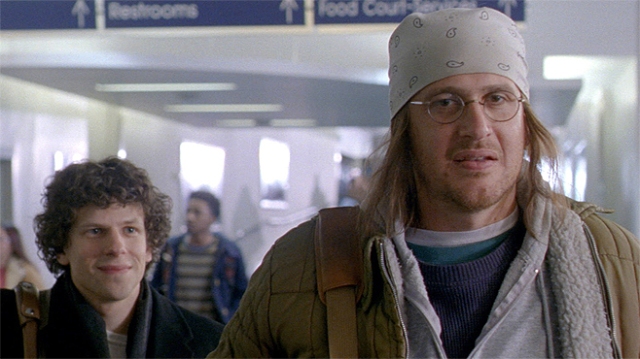 First, I have to admit in advance that I am not very familiar with two real-life authors whose meeting inspired “The End of the Tour”. Although his second novel “Infinite Jest” was cited by Times as one of the 100 best English-language literature novels published during 1923-2005, David Foster Wallace is not known well in South Korean and his magnum opus has not been translated yet here, though I may read that 1079-page novel someday out of curiosity.

In case of David Lipsky, only one of his books, “Absolutely American: Four Years at West Point”, was introduced to South Korean readers, and I belatedly came to learn about his non-fiction book “Although of Course You End Up Becoming Yourself: A Road Trip with David Foster Wallace” through “The End of the Tour”, which is adapted from Lipsky’s book by Donald Margulies. I have no idea on how much it is close to the book or the actual interview between Lipsky and Wallace, but the movie is an interesting character drama revolving around the tense, strained interactions between two writers on the opposite positions, and I enjoyed it although it did not show or tell me much about these writers.

After the prologue scene set in 2008, the movie goes back to 1996, when Wallace, played by Jason Segel, draws considerable attentions as a possible next great American writer after the publication of “Infinite Jest”, which is, as far as I could see from the movie, hailed as the representative of Generation X as Nirvana was around that time. Although he is initially skeptical about heaps of praises showered upon Wallace, Lipsky, played by Jessie Eisenberg, sees that Wallace can be a compelling interview subject after reading “Infinite Jest”, so he pitches his idea to the editor of Rolling Stone magazine, and he soon flies to Illinois to meet his interviewee. 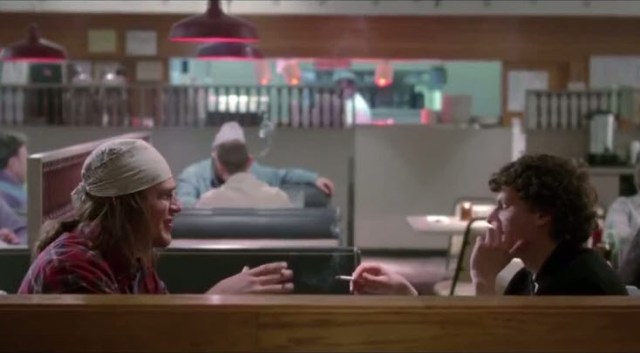 Wallace, who lives alone while teaching a writing class in a nearby college, is visibly reluctant although he courteously greets Lipsky at his house. Segel, who pushes his sad sack persona further into a more serious area, looks mild and gentle at first, but we begin to sense the guarded attitude behind Wallace’s introverted demeanors. He is nervous about the possibility of being misrepresented by Lypski, and becoming a celebrity writer getting more attention than his book is the last thing he wants.

After their first conversation is floated around different subjects including Wallace’s early years, Wallace lets Lipsky stay at his house for a while, and they go around together as Wallace completes his book tour in Minneapolis-Saint Paul. They go to a bookstore where many people are eager to meet Wallace, and they also hang around with two young ladies who are Wallace’s friends.

The mood becomes a bit more relaxed between Wallace and Lipsky as they get used to each other, but there is still the gap between Wallace and Lipsky as an interviewee and an interviewer. As a writer assigned to write about anything to interest readers, Lipsky keeps searching for useful materials around his interviewee, and Wallace is not so pleased about that although he gives some of what Lipsky wants as they pull and push each other during their conversations. He also does not like it when Lipsky approaches a little closer to one of his female friends, and he later gives Lipsky a petty passive-aggressive warning.

In case of Lipsky, he is not wholly innocent either. As a burgeoning writer who did not get much attention with his first novel, he certainly envies the praises Wallace has received, and we cannot help but notice the opportunistic side of his assignment when he virtually invades Wallace’s privacy while his interviewee is not around him. Eisenberg has always been good at playing smart but nervous characters since his first notable turn in “The Squid and the Whale” (2005), and he utilizes his sharp presence effectively whenever his character becomes petty or pushy. 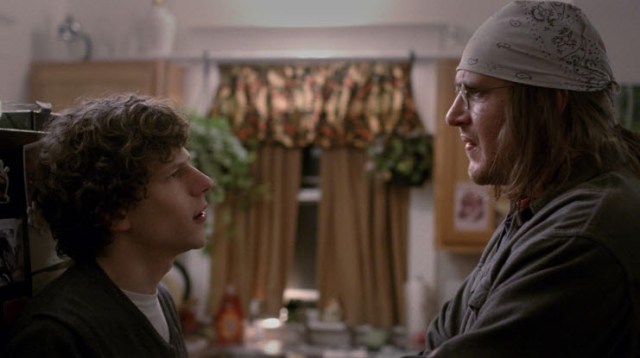 Mainly focusing on the constantly shifting dynamics between his two lead actors, the director James Ponsoldt, who previously directed “The Spectacular Now” (2013), holds our attention as Marguiles’s screenplay languidly flows from one circumstance to another. There are many long dialogue scenes in the film, and they are handled with spontaneity and intrigue thanks to the engaging performances by Eisenberg and Segel.

These moments remind me of Louie Malle’s “My Dinner with Andre” (1981), but “The End of the Tour” does not reach the level of that great film in comparison. While Andre Gregory and Wallace Shawn in “My Dinner with Andre” freely exchange their ideas and world views with no limit during their verbal match, Wallace and Lipsky in “The End of the Tour” mostly stay inside each own boundaries during their more tentative and watchful one. They manage to open themselves to each other a little in the end, but it is just a temporary moment, and they still look at each other from the distance.

I recommend “The End of the Tour” because I was entertained enough by its enjoyable duo performance, but I doubt whether it can induce you to look around Wallace’s works, for the movie is more interested in the universal aspects of being writer rather than something more specific about Wallace or Lipsky. “Infinite Jest” is indeed impressive in its size and book cover, but I wish the movie quoted a little from the book at least.

That weakness reminds me of when I watched “Iris” (2001), a biography film about renowned British author Iris Murdoch. I liked it as a sincere melodrama, but I was not particularly compelled to read her books after when it was over (As a matter of fact, I have not touched any of her books yet – what a shame!). After watching “The End of the Tour”, I did put “Infinite Jest” on my reading list, but I fear it will probably stay there quite long. 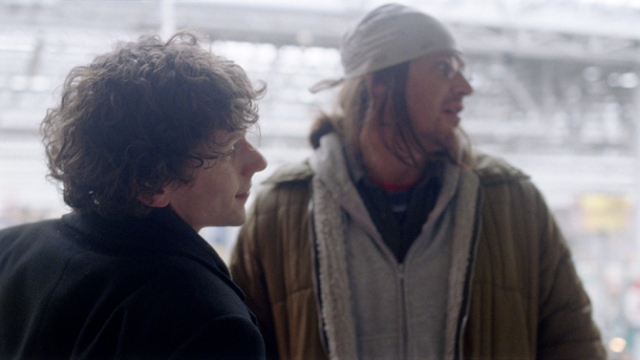