When she suddenly comes closer to him, he is happy for that. When she is gone then, he is determined to see her again. “Paper Towns” is often predictable, but it handles its story and characters with sincerity and care to engage us. The main characters may feel like stereotypes at first, but they slowly show some depth especially around the second half of the story, and they come to us as likable characters to empathize with.

Since Margo (Cara Delevingne) and her family moved into the house right in front of his family house, Quentin (Nat Wolff) has been carrying a torch for her for several years, but they have not been very close to each other recently. While there was a time when this charming girl, who is as eager and curious as Nancy Drew, actively hanged out with Quentin during their pre-adolescence years, but now she usually hangs out with popular kids as the coolest girl in their high school. In the other words, she seems to be out of his league for Quentin, who is your average shy teenager boy with nerdy sides.

During one night, Margo makes a surprise visit to Quentin. She needs someone to drive her around their neighborhood, and he gladly helps her even though she does not tell him much about her purpose. Using his parents’ vehicle, he takes her to a supermarket because she has to buy several things in advance, and then it turns out that Margo has a small revenge plan on several friends of hers including her boyfriend who has lately cheated on her.

Margo and Quentin may get themselves into serious troubles because of Margo’s plan, but their mischievous night ends well in spite of a few little problems. Margo gets her payback moments as she wanted, and Quentin gets a nice private moment with her when she takes him to a tall office building for enjoying a quiet night view of their town together. She becomes opened to him more than before as letting out her inner thoughts and feelings in front of him, and it seems they may become more than mere old friends. 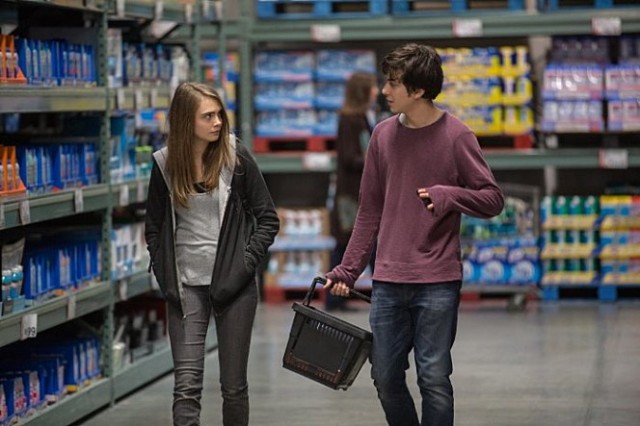 But then Margo is gone on the next day, and Quentin is perplexed by her sudden disappearance. Margo’s family and many of her schoolmates are not very worried about this because she sometimes goes away without any announcement just for seeing and experiencing more of the world outside, but, as reflecting on their special night, Quentin begins to wonder whether he has to track her down to meet her. Did they really feel something between them during that night? And is it possible that Margo is waiting somewhere to be found by him before their upcoming graduation day?

The story begins to look like a mild, lightweight version of “Gone Girl” (2014) as Quentin begins to notice small curious things which might be the clues left by Margo before her disappearance. He finds the first potential clue from Walt Whitman’s poetry book in her bedroom, and that leads to several other things which may give him more hints on where she is now.

Quentin is also assisted by others around him. His best friends Ben (Austin Abrams) and Radar (Justin Smith) are willing to help their friend’s search, and they are surely dependable allies when they and Quentin go inside a creepy abandoned place which was Margo’s private space. Mainly because of an unresolved misunderstanding between her and Margo, Margo’s best friend Lacey (Halston Sage) is also interested in the whereabouts of Margo, so she comes to join the boys as it becomes clear to everyone that they may put more efforts on their ongoing search. 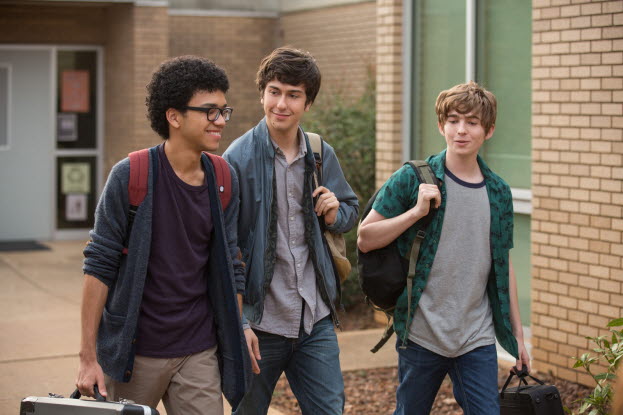 The movie is based on the novel of the same name by John Green, who also wrote “The Faults in Our Stars”. Although I did not like its 2014 film adaptation enough, I enjoyed several nice intimate scenes in that film, and “Paper Towns” also has a fair share of good moments as deftly going around comedy and drama with more satisfaction. The adapted screenplay by Scott Neustadte and Michael H. Weber, who wrote “The Spectacular Now” (2013) and adapted “The Faults in Our Stars”, takes its time in building plot and characters, and the director Jake Schreier, who previously made his directorial debut with bittersweet SF comedy drama film “Robot & Frank” (2012), gives us a number of sensitive scenes as its characters reveal more about themselves along the story.

One of the best moments in the film is when Quentin unexpectedly comes across Lacey during one evening party. The situation is pretty awkward for both of them, but then it leads to a small thoughtful talk between them, and she later shows her little surprising side to the boys. I also like a warm private scene between Radar and his girlfriend Angela (Jaz Sinclair), and how they deal with the strains in their relationship is both touching and amusing (he is reluctant about opening up himself further to her due to one odd private reason you have to see for yourself). In case of Ben, he initially looks like a merely buffoonish character, but then he turns out to be smart and decent enough to be embarrassed when he is recklessly drunk at one point.

I will not go into details about a bold step taken by Quentin and other characters during the second half of the film, but let’s say Nat Wolff, who previously played a supporting character in “The Faults in Our Stars”, and his fellow performers are enjoyable to watch together in their characters’ emotional journey. What they come to learn in the end will not surprise you, but “Paper Towns” is entertaining in its delightful progress to the predictable arrival point, and I came to like its characters more than expected when it finally arrived at that point. It is a mild familiar stuff, but it cares about its story and characters, and I like that.

This entry was posted in Movies and tagged Coming-of-age drama, Friendship. Bookmark the permalink.