South Korean film “Right Now, Wrong Then” is another small piece of delight and amusement from Hong Sang-soo, one of the most prolific filmmakers in South Korea. Like Woody Allen, he makes one or two films per year, and watching his latest work has been sort of an annual event for me and other South Korean audiences. We always anticipate what we will get from him every year, and his small human comedy usually tickles us while reminding us again of how men can look silly sometimes – especially when they are accompanied with drinks and, yes, women.

The movie is about two days mainly viewed through Cheon-soo (Jeong Jae-yeong), a filmmaker with several films in his established career. He comes to Suwon for the screening of one of his movies, but he happens to arrive in Suwon a day earlier than scheduled, so he has some free time for himself before going back to a motel later.

The opening scene shows him noticing a pretty young woman entering a restored palace before him, and he encounters her later when he is having a quiet rest inside the palace. Their initial interaction is a bit awkward, but they get to know about each other bit by bit after their formal introduction. Her name is Hee-jeong (Kim Min-hee), and Cheon-soo is clearly smitten with Hee-jeong. He says she is pretty, and she looks flattered to hear that from a well-known movie director like him.

After they leave the palace together, they go to her studio, and she gladly shows him her latest painting as she is working on it. He only throws some shallow praises to her painting just for getting more esteem from her, but she is oblivious to that as feeling more attracted to him, so they come to spend more time with each other while having a dinner at a nearby sushi restaurant.

Like many characters of Hong’s films, they drink soju as further softening the mood between them, and this long conversation scene feels fluid and spontaneous as Hong’s two lead performers do a lot more than looking drunk enough on the screen. As some of you know well, the performers in Hong’s films actually drink for their drinking scenes, and it should be pointed out that Jeong Jae-yong and Kim Min-hee hit the right notes together with their drunken chemistry to generate small chuckles for us (I have no idea on what will happen if Hong’s lead performer belatedly turns out to be a recovering alcoholic right before the shooting of his drinking scene).

Cheon-soo and Hee-jeong’s drinking hour is continued when she gets a call from her friends waiting for her at a small local cafe named Poet and Farmer. Yeong-sil (Seo Yeong-hwa) and Soo-yeong (Choi Hwa-jeong) are eager to have a conversation with Cheon-soo while drinking along with him and Hee-jeong, and that is when Hee-jeong begins to realize how superficial and insincere Cheon-soo has been to her. As her friends keep talking with him, the camera slowly focuses on Hee-jeong’s face, and Kim ably conveys the quiet but palpable shift in her character’s mind.

The night eventually ends as Hee-jeong walks back to her home alone while her mother is waiting for her. On the next day, we see Cheon-soo at the end of the Q&A session with a local movie critic. When the critics asks him a rather banal question, Cheon-soo is so annoyed that he gives a little too petty and aggressive response right in front of the audiences, but it is pretty clear to us that he does not know better than anyone in the room, and that becomes another amusing moment in the movie.

As previously he did in “The Day He Arrives” (2011), “In Another Country” (2012), “Nobody’s Daughter Haewon” (2013), “Our Sunhi” (2013), and “Hill of Freedom” (2014), Hong cheerfully plays with repetitive narrative elements again here in this film, and its second half gives us what is essentially the alternative version of what we saw during its first half. Again, the story begins with the accidental meeting between Cheon-soo and Hee-jeong at the palace, and then they go to her studio as shown before, but then we begin to notice different things here and there.

The plot still moves around the same other places under the same mood, but what happens between the characters looks and feels different in comparison to the first half. Cheon-soo is relatively more honest and sincere to Hee-jeong in this time, but, besides his current status as a married man, he feels frustrated about his inability to express his growing feeling toward her, and there is a hilarious moment when he does a very embarrassing thing in front of ladies while being, of course, pretty drunk.

Regardless of how these two different versions are related to each other, “Right Now, Wrong Then” is a witty comedy film wryly musing on how our life can go differently through small choices and moments even during a short period of time, and there are many things to savor in this film. While he has made his works on small budget, Hong can draw notable South Korean actors to his project as one of the most acclaimed South Korean filmmakers, and it is certainly a pleasure to watch Ki Joo-bong, Yoon Yeo-jeong, Yoo Joon-sang, and Ko Ah-seong in small but effective supporting roles.

As I said before, it took some time for me to get accustomed to Hong Sang-soo’s films, but I eventually began to like his films around the time when “Hahaha” (2010) and “Oki’s Movie” (2010) were released to change my opinion on his films. If you are still baffled or bored by Hong’s movies like I was, maybe you don’t have to watch “Right Now, Wrong Then”, but then you will miss what is possibly the wittiest South Korean film from this year. 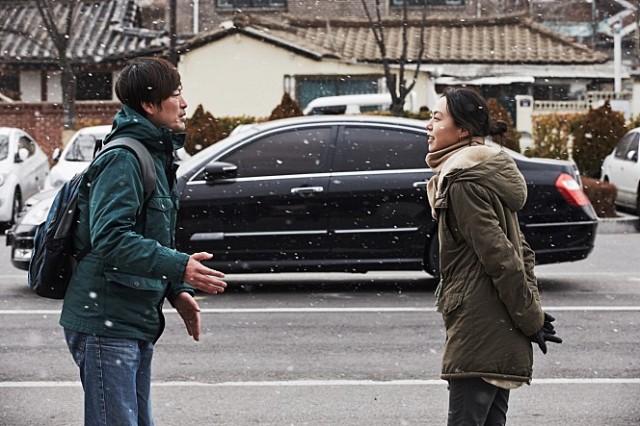