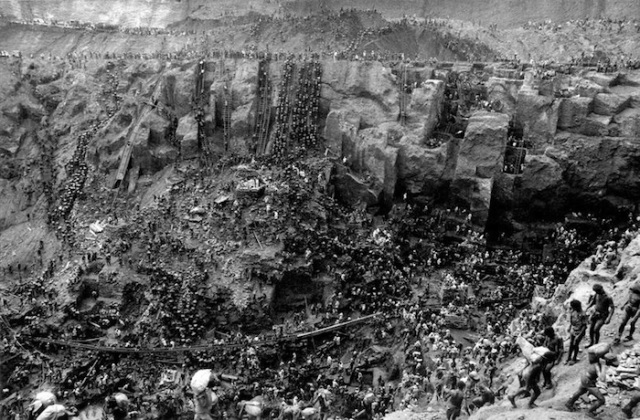 There are unforgettable moments to mesmerize you in Oscar-nominated documentary “The Salt of the Earth”, a compelling look into the life journey of one photojournalist who have captured various sights and people on his camera for many years. As the highlights of his long, illustrious career are vividly presented through his photographs as well as his own words, we come to see a wise, intelligent man who were deeply affected by what he had witnessed through his camera lens, and it is all the more touching to see how he later moved onto another new chapter of his life and carrier along with the hope for the better world.

At the beginning, we see a number of photographs shot at Serra Pelada, a massive gold mine in Brazil. This place was one of the memorable sights in Godfrey Reggio’s documentary “Powaqqatsi” (1988), and the photographs in “The Salt of the Earth” are also vivid in their visual presentation of the mine and its countless workers. We notice thousands of laborers climbing up and down along those steep slides of the mine, and they often look like tiny ants within the vast scale of the mine. Coming from different places and classes, these people all hoped for finding gold someday, and they kept working hard no matter how grueling their work environment was – and no matter how slim the chance of fortune was for them.

These photographs were shot by a renowned photojournalist Sebastião Salgado, and we are told about his early life in Aimorés, Brazil. Although he was not a very good student during his childhood years, he managed to get a chance to go to São Paulo for higher education, and he got a master’s degree in economics from the University of São Paulo several years later. He initially worked as an economist for the International Coffee Organization, and then he later worked for the World Bank after he and his wife Lélia moved to Paris mainly because of the military dictatorship in Brazil.

As he went around Africa during his business trips, he began to have an interest in photography, and he eventually quitted his lucrative job to pursue the career of a professional photographer. With his wife’s support, he worked around here and there until he finally got a chance to launch his first photography project, “The Other Americas” (1977-1984). He went around many remote places in Latin America, and Salgado reminisces about a few episodes he experienced during that period as looking at those wonderful photographs shot through his considerable investment of time and efforts. Even after more than 30 years, they are still imbued with the palpable sense of life and place, and we cannot help but be curious about the people shown in the photographs as also observing their worlds.

As he continued his work in the following projects including “Sahel” (1984-1986), “Workers” (1986-1991), and “Migrations” (1993-1999), Salgado was frequently absent at his home, and his son Juliano Ribeiro Salgado, who did the narration along with his co-director Wim Wenders in their film, recollects his old personal memories of his father. Although he was usually not there for Juliano or his younger brother afflicted with Down Syndrome, Juliano looked up to his father with respect none the less, and it is clear from this documentary film that his respect toward his father remains same as before. When his father recently went to the Arctic area for his latest project, Juliano and Wenders followed him for getting to know more about his work process, and there is an amusing moment in which they are unexpectedly delayed by one meddling polar bear.

And we look at more of Salgado’s photographs as he talks about how it was sometimes very difficult for him to face the dark sides of humanity during his work. His photographs shot at the refugee camps in Ethiopia during 1984 show us many despairing moments of famine, disease, and death, and it is often overwhelming to watch those bleak sights of human sufferings. Most of the people shown in the photographs are drained of life and hope in their thin, skeleton appearances, and one of the most heartbreaking photographs shows three small babies looking directly into the camera – and we learn that one of them was actually dying without any help at that time. 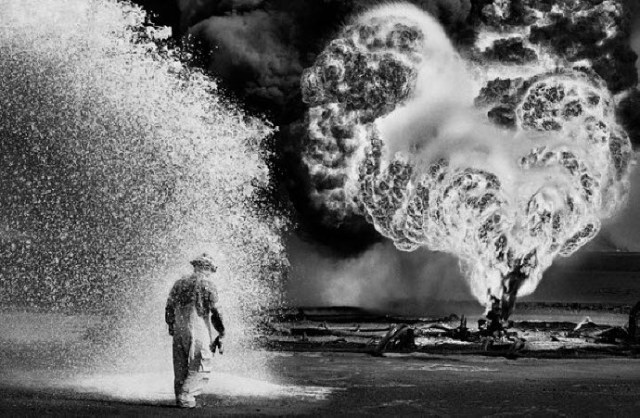 Salgado flied to Kuwait right after watching the burning oil rigs on TV in early 1991, and the images he brought from the aftermath of the Gulf War are hellish to say the least. With the raging pillars of fire on the desert field and the extreme conditions workers had to deal with for extinguishing fires and stopping oil leaks, it almost looks like those post-apocalyptic worlds we have seen from SF movies, and Salgado’s photographs are undeniably powerful as the grim, devastating record of destruction and desolation like Werner Herzog’s documentary “Lessons from Darkness” (1992), which was also shot in Kuwait around the same time.

He also went around a number of conflict areas including Yugoslavia and Rwanda for photographing refugees fleeing for their life, and Salgado tells us how he was saddened by many painful moments of human tragedies he encountered and documented using his camera. As he strongly points out at one point during his interview, we human beings are not very decent animals in most cases; we are capable of heartless brutality and ignorance as shown from countless incidents throughout our history, and, sadly, that virulent trend is still being continued even at this point.

Nevertheless, Salgado did not resort to despair and resignation, and he came across another turning point for his life and career not long after he came back to his hometown. While trying to reforest the barren environment of his family farm, he found a new interest which led to the foundation of an environment organization by him and his wife, and then he embarked upon his new photography project with regained passion. Around the end of the documentary, we see how the area around his family farm looks far different than before as a result, and that is another moving moment in the film.

“The Salt of the Earth”, which received the Special Jury Prize in the Un Certain Regard section at the Cannes Film Festival in last year, is a captivating documentary to watch on the whole, and Wim Wenders and Juliano Ribeiro Salgado did a superlative job of presenting their subject with respect and care while earnestly presenting the deep humanity behind his photojournalistic works. Although he is currently 71, Salgado is still active at present, and he reminds me of the aging photographer hero of documentary film “Bill Cunningham New York” (2010). Both of these old men are quite dedicated to their profession, and they certainly love what they do with their cameras. I guess they will probably keep working as long as they can push camera button.

This entry was posted in Movies and tagged Documentary, Journalist, Photographer, Real-life figure. Bookmark the permalink.