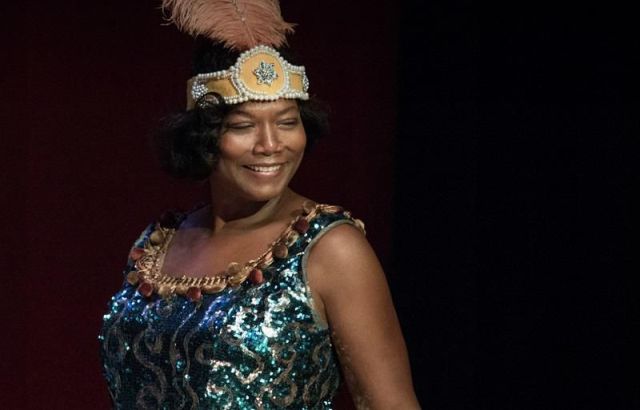 As a biographic drama about one fascinating real-life entertainer who went through many barriers as reaching for her stardom, HBO TV movie “Bessie” is not without problems. It is rather plain and clichéd while riddled with several glaring problems including scattershot narrative and thin characterization, but this is still an engaging movie mainly thanks to its strong lead performance to hold the center as its heart and soul.

The movie is about the life of Bessie Smith (Queen Latifah), a popular American blues singer of the 1920-30s who has been regarded as one of the greatest singers of her time. After the brief prologue scene showing her at the peak of her career, the story moves back to the early 1910s, and we see how feisty and ambitious she was even during her early struggling years. When a rude guy hits her hard during their quick sex behind a theater, she instantly gives him a lesson to remember, and then she promptly goes up to the stage and delivers a performance. During one audition, she tries to get attentions as much as possible although producers prefer light-skinned colored women, and then she gets insulted by the brown paper bag test, which was used to determine whether one was light-skinned enough or not.

And then there comes a good chance when she goes to meet popular blues singer Ma Rainey (Mo’Nique) by herself. Rainey is clearly impressed by Bessie’s forthright attitude during their first meeting on her troupe train, and she generously teaches her new protégé a few important things about how to capture the audiences’ attention (“You got to put something else in it. The blues is not about people knowing you, it’s about you knowing people.”). While working under Rainey, Bessie learns more about show business, she quickly establishes her own style and personality to enthrall her audiences – even when she is performing right next to her mentor.

As she becomes more ambitious with her growing ego, Bessie eventually leaves Rainey, and she begins to do her own show with the assistance of her brother Clarence (Tory Kittles). She later meets Jack Gee (Michael Kenneth Williams), and she quickly begins a passionate relationship with this tough security guard although she has already been involved with her lesbian lover Lucille (Tika Sumpter). Jack becomes her manager as well her husband, and Bessie’s career goes up further along with her own troupe train and a big record deal with Columbia Records (the recording room scene has an amusing period detail to remind us of how elementary the recording technique was during that period).

While keeping hopping between many other episodes in the life and career of its subject, the screenplay by the director Dees Rees and her co-writers Christopher Cleveland and Bettina Gilois, which was based on the story written by Rees and late Horton Foote, frequently feels unfocused and incoherent. Several interesting story elements including Bessie’s bisexuality and her unhappy family history do not gel well together in its loose narrative, and it particularly feels superficial in the depiction of her apparent alcoholism. I could not help but notice how often she has a jar of bootleg besides her, and it is sort of remarkable that she mostly looks all right except in a few scenes (she died in 1937 in the age of 43).

Fortunately, the movie is held up together well by Queen Latifah, who recently received a Emmy nomination for one of the best performances in her career (she already won an Emmy on last Sunday as one of its producers). Since her delightful Oscar-nominated supporting turn in “Chicago” (2002), Latifah has shown more of her undeniable star quality which is a life force to reckon with on the screen, and she certainly dominates the screen whenever that is required. Through her lively embodiment of her character, Bessie comes to us as a complex human character to watch; strong but vulnerable at times, she is frequently driven by her own ego as well as her own integrity, and she often does not treat well others around her while stubbornly going her way as before.

As a colored female artist, she naturally confronts racism as going around the country, and that is where some of Latifah’s best moments in the film come from. When a bunch of Ku Klux Klan members try to interrupt her evening performance on the field, she surely shows them that she is someone they cannot possibly mess with, and that increases more her popularity among her black folks while becoming the target of angry white racists. At an affluent social party held in Manhattan, she willingly gives a blues performance as requested for other white guests at the party, but she does not tolerate one hypocrite snob when he impertinently expresses his condescending view on black people behind his sophisticated appearance.

The supporting performers surrounding Latifah are not utilized well in most cases due to their underdeveloped characters, but some of them do leave some impression as revolving around her. Mo’Nique, whom I still remember for her ferocious Oscar-winning turn in “Precious” (2009), has lots of fun with her juicy role, and Michael Kenneth Williams is solid as a husband who loves his wife although he has a fair share of extramarital affairs just like her. Khandi Alexander is Bessie’s elder sister who is as stern as Mrs. Danvers in “Rebecca” (1940), Mike Epps is a bootlegger who becomes more serious about his ‘business relationship’ with Bessie, and Charles S. Dutton briefly appears as Ma Rainey’s no-nonsense husband/manager.

Compared to Rees’ previous film “Pariah” (2011), a touching coming-of-age drama about a young urban black teenager girl struggling with her closeted homosexuality, “Bessie” looks less distinctive, but this average TV movie tells a story which deserves to be told, and Latifah’s performance is worthwhile to watch. It could have been better indeed, but it is still good enough to compensate for its many flaws. 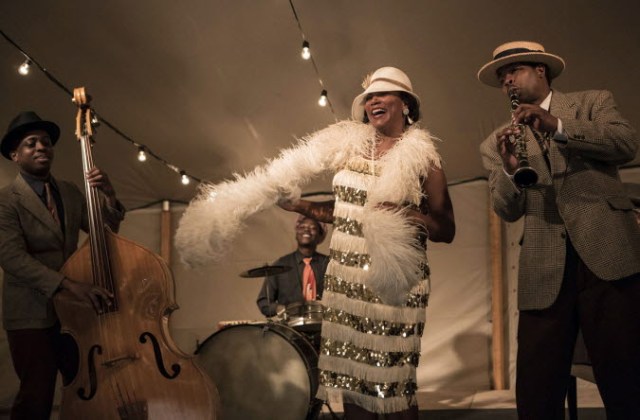 This entry was posted in Movies and tagged Bisexuality, Husband and Wife, Real-life figure, Real-life story, Singer. Bookmark the permalink.