The Guantanamo Bay detention camp has been one of the most unjust things during the War on Terror, which is still being continued around the world with no end in sight. Because the people held at this camp are technically not war prisoners but detainees, the Geneva Conventions cannot be applied to them in the viewpoint of the US government and military, and the camp has subsequently gained its notoriety along with many alarming reports on the serious violations of human rights committed in this isolated place in Cuba.

Clearly intended to give us a close, intimate look into the injustice inside the Guantanamo Bay detention camp, “Camp X-Ray” focuses on a strained relationship developed between its two different characters who happen to come across each other in their opposite positions. As they gradually form a small human connection between them despite their differences, we come to identify with their respective viewpoints, and the movie tactfully lets us observe and reflect on their frustrating circumstance while never hammering its messages on us.

Kristen Stewart plays Private Cole, a young female soldier who is about to begin her first day at the Guantanamo Bay detention camp when we meet her for the first time. The main duty of her and other young soldiers sent here is to monitor a group of non-cooperative detainees incarcerated in Camp Delta (the title of the movie comes from the name of a temporary camp before Camp Delta), and she soon sees that her job will not be easy at all. The detainees, who are mostly Islamic fundamentalists, certainly do not welcome her presence, and she gets hit hard by one of them when she and others attempt to suppress his violent tantrum. 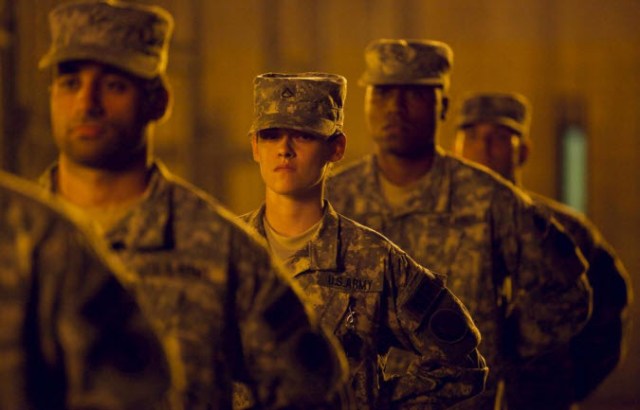 Furthermore, as one of a few female soldiers in the base, Cole always has to prove to other soldiers around her that she can be as tough as them. She dutifully goes through her rather rough first day without complaint, and she counters well when her immediate senior Corporal Ransdell (Lane Garrison) throws a rude ribald joke at her. When she returns to her private room after her duty hour is over, she becomes more relaxed with her hair loosened, and we see her having an online conversation with her mother.

Occasionally giving her and other guards troubles to handle, most of her detainees are not very communicative, but Ali (Peyman Moaadi, who previously appeared in Asghar Farhadi’s “A Separation” (2011)) is willing to start a conversation with Cole. When she brings in a library cart, he asks her whether she has the last book of the Harry Potter series he has been waiting for two years, and then he keeps talking to her whenever he can. Their initial interactions are not very friendly, and Cole experiences another unpleasant incident because of Ali, but they eventually become less hostile to each other along with more interactions between them.

The movie is the director/writer Peter Sattler’s first feature film, and he did a good job of establishing that stuffy feeling of confinement on the screen. Mainly shot at an abandoned prison facility in Whittier, California, his movie mostly revolves around a few places in the detention camp, and we often watch Cole going around her small, narrow area with her partner to check their detainees every 3 minutes (Corporal Ransdell cynically tells his soldiers at one point, “You’re not here to keep these men from escaping. The walls do that. You’re here to keep them alive.”). With small realistic details including the preparation of the meals for detainees or the erasure of women’s photos in newspapers to read, the movie draws us into the mundane routines Cole and other guards go through in their closed environment, and the cinematography by James Laxton constantly evokes the limits surrounding them and detainees through austere scene compositions and frequent close-up shots. 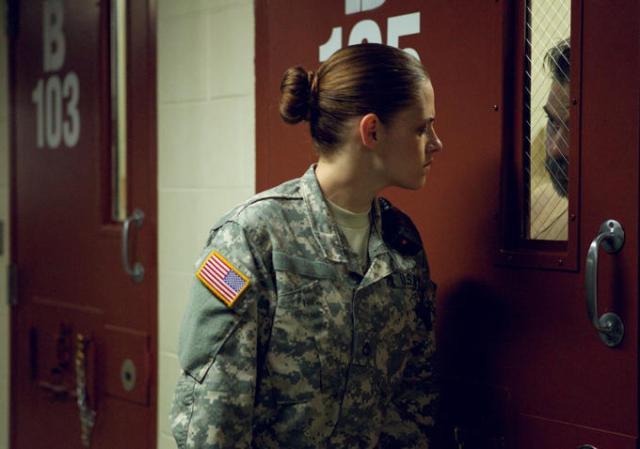 The two lead performers in the film are very good in their nuanced performances. Although she may be associated forever with those disposable Twilight movies, Kristen Stewart is a talented actress with the star quality of her own, and her commendable performances in this film and Olivier Assayas’ “Clouds of Sils Maria” (2014) confirm that she is on the next level of her promising career. There are several crucial moments when she has to convey us Cole’s conflicted emotional state behind her guarded appearance, and Stewart ably holds our attention even when her character does not say a lot. As Cole realizes more of the inhuman condition Ali is put into, she also becomes more aware of her disadvantageous position, and there is a hurtful moment when she is reminded again of how powerless she is in the male-dominant military system (As the soft-spoken officer who does not want any trouble under his command, John Carroll Lynch is subtly intimidating during this scene).

On the opposite, Peyman Moaadi complements his co-star’s restrained acting with his nervous intensity barely hiding his character’s accumulating despair. The movie does not tell us much about Ali’s personal background except the opening sequence depicting how he is suddenly captured at his home and then promptly transported to Guantanamo Bay, but he comes to us a smart, talkative guy with defiant streak, and we see how Cole comes to like him with care and respect. A certain scene during the latter half of the film feels like an obligatory climax, but Stewart and Moaadi hold this scene together tightly with conviction, and we do care about how it will be resolved in the end.

“Camp X-ray” is a somber but provocative film worthwhile to watch for not only its political subject but also for its thoughtful direction and strong performances, and it will leave you something to talk and discuss about. Although President Obama issued a request to shut down the Guantanamo Bay detention camp in 2009, the detention camp remains maintained even at present while holding 116 detainees. As reflected by the long ending scene of the film, it is still a problem with no closure yet on the horizon. 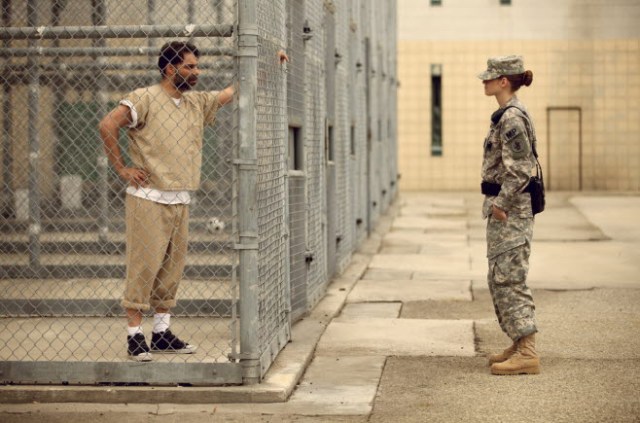 This entry was posted in Movies and tagged Detainee, Detention center, Guard, Soldier. Bookmark the permalink.