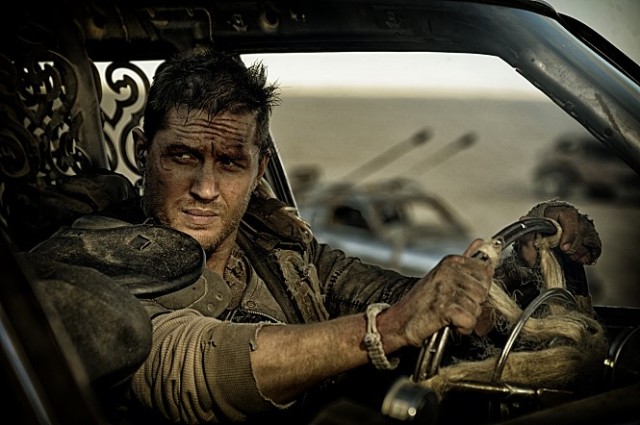 “Mad Max: Fury Road”, indubitably the best work in the Mad Max series, is a superb action film fully charged with enormous vigor and sparky excitement to overwhelm you to the very end. Mixing old and new elements together in its volatile concoction, this superlative sequel is the magnificent return with vengeance from a director who set a new standard for action films more than 30 years ago, and his stupefying artistic/technical achievement reminds us that many Hollywood blockbuster action films dream too small as aiming too low in these days.

After the breakthrough success of his low-budget debut feature film “Mad Max” (1979), the director George Miller put his iconic hero into wider and gloomier backgrounds in the following sequels “Mad Max 2: The Road Warrior” (1981) and “Mad Max Beyond Thunderdome” (1985), and the premise of “Mad Max: Fury Road” is not very different from that. In the future not so distant from our time, the modern human civilization we know is completely collapsed due to some big global war. Severely affected by the devastations of the war, the humanity is regressed into poverty and barbarity, and cruelty and misery are usual things in this barren, unforgiving post-apocalyptic world without much hope or promise for the future.

And there is a lonely man wandering alone around vast wastelands as struggling to survive like many others. Although he does not reveal a lot about himself, that does not matter much even if you have not seen the previous films, for Max Rocktatansky, who was originally played by Mel Gibson and is now competently filled by Tom Hardy, is a quintessential reticent action movie hero who speaks volume through his actions. The opening scene succinctly introduces him along with his vague past which constantly haunts his mind through occasional flashback shots, and then it is followed by the first action scene in the film when he happens to encounter a bunch of vicious guys working for a megalomaniac warlord named Immortan Joe (Hugh Keays-Byrne, who previously played the vile biker gang leader in “Mad Max”). After captured by them, Max is imprisoned as a valuable asset for his universal blood type, and he finds himself becoming a living blood bag for Nux (Nicholas Hoult), a sick young man who is one of Immortan Joe’s fanatic soldiers called ‘War Boys.’

Always wearing a gas mask to breathe and survive, Immortan Joe is a very twisted man as monstrous as his gruesome appearance, and we see more of his barbaric reign mainly maintained by his full control of clean water, which has been the most important resource for everyone besides oil. There is a memorable scene where he momentarily pours down water onto the desperate crowd right below his headquarters placed on the top of one of several giant rocks, and we cannot help but notice that these rocks look far greener than the surrounding desolate environment.

Like Noah Cross in “Chinatown” (1974), Immortan Joe wants to own the future as well as water, and it turns out that he has held a group of female captives as ‘breeders’, who will bear him normal healthy children to succeed his reign. Furiosa (Charlize Theron), a feisty female warrior who is one of his top-lieutenants, has the other plan for these unfortunate women; after hiding them inside her big oil tank rig, she is going to take them to a safe place far from Immortan Joe’s area, and she is ready to take any risk for what she has probably planned for years as her revenge/redemption. As soon as he learns that Furiosa has betrayed him, Immortan Joe and his War Boys immediately chase after Furiosa’s heavily-armed rig, and Max reluctantly becomes Furiosa’s ally after literally pushed forward into this trouble (if you are a fan of “Mad Max 2”, you will surely appreciate how that happens).

Once it shifts its gear into the full throttle mode around that point, “Mad Max: Fury Road” swiftly drives through the relentless series of spectacular action sequences brimming with sheer metallic power and crackling intensity guaranteed to smack you down. There are naturally a lot of bangs and crashes here and there in their propulsive flow of non-stop action, but we seldom get lost thanks to Margaret Sixel’s dexterous editing, which always maintains the clear, forthright sense of overall direction even when the actions become quite busy and frantic amid lots of sound and fury. The Oscar-winning cinematographer John Seale, who came out of retirement for this film, did a splendid job of making the action sequences look visceral and epic on the screen, and there are some beautiful background shots based on the strikingly bright colors of blue sky and endless desert landscapes, which contrastingly accentuate the gray, metallic texture of the film.

While some of its most explosive moments are apparently assisted by CGI like Furiosa’s prosthetic arm, the movie mostly depends on real stunt actions. The stunt actions in the film are phenomenal to say the least, and their gritty verisimilitude generates vibrant hyperkinetic mood along with the impactful sound effect design on the soundtrack. Sure, I did enjoy those big, goofy CGI spectacles in recent Fast and Furious movies, but, compared to many furiously stupendous sights in “Mad Max: Fury Road”, they just look like Sunday afternoon picnic. I was absolutely blown away by how the first major action sequence culminates to its grand highpoint peppered with the extra dose of awe by the courtesy of CGI, and then I was more impressed by how the movie accelerates itself further during the following action sequences, which are respectively equipped with each own thrills and goodies as the individual chapters of the story.

This is indeed exhausting at times, but we are totally absorbed into the actions none the less, and we also come to get a more acute sense of what is at stake emotionally and physically in the characters’ situations. Most of the characters in the film are simple and broad, but their distinguishable personalities are quickly established through their striking appearances or amusing names such as Rictus Erectus (Nathan Jones), The Bullet Farmer (Richard Carter), The People Eater (John Howard), and The Organic Mechanic (Angus Sampson).

While Tom Hardy’s solid lead performance functions well as a stoic anchor to hold the wild, brutal spirit of the movie, his co-stars are equally convincing in their good performances. Hugh Keays-Byrne is effective as a loathsome villain who will stop at nothing for getting what he is obsessed with, Nicholas Hoult gradually earns our sympathy as a lackey desperate to earn recognition from his big boss, and Charlize Theron is commendable in her committed performance as another strong dramatic center in the story. The movie is ultimately as much about Furiosa as about Max, and her character arc along the story is economically and effectively conveyed through several quieter (and slower) moments in the film. In addition, Immortan Joe’s breeder women, played by Rosie Huntington-Whiteley, Zoë Kravitz, Riley Keough, Courtney Eaton and Abbey Lee, are not just helpless damsels in distress, and it is nice to see Huntington-Whiteley doing a lot more than her hilariously empty stare in “Transformers: Dark of the Moon” (2011). 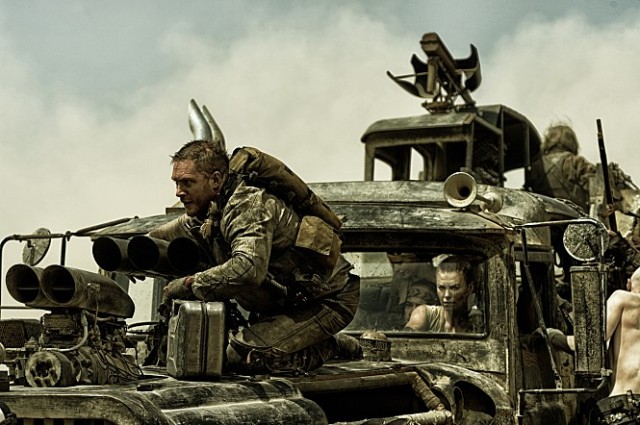 Miller and his crew also put a considerable amount of care and effort into the looks of the world his characters inhabit, and I was not surprised to learn that they already had the detailed grasp of how the characters and their world look right from the beginning of the production. While the dystopian world depicted in the film certainly looks as shabby and ragged as we can expect, it does not feel merely ugly and grimy, and it is decorated with small and big interesting details to make this world look curious and plausible (I was particularly impressed by the sight of a bunch of workers working on the giant cogged wheels to operate a big lift, for instance). Many vehicles in the film do look like they were assembled from rusty junkyard scraps, but they are imbued with distinctive aspects as metallic characters, and there is even a big vehicle carrying not only a group of war drum players but also an electronic guitar player who maniacally performs music along with the actions unfolded in front of him. This looks pretty outrageous, but, as I muse on this absurd detail, I am reminded that 1) it is an amusingly deranged but logical extension of primal tribalism augmented with the remnants of modern technology and 2) it definitely works as an extra boosting factor for Junkie XL’s overpowering score.

Since “Mad Max Beyond Thunderdome”, George Miller seemed to leave behind his Mad Max movies during last 30 years. After directing “The Witches of Eastwick” (1987) and “Lorenzo’s Oil” (1992), he produced beloved children’s film “Babe” (1995), and then he directed criminally underrated “Babe: Pig in the City” (1998) and Oscar-winning animation film “Happy Feet” (2006), which was followed by its rather unsuccessful 2011 sequel. While recently having his 70th birthday early in this year, Miller shows us here that he is still the same bold, uninhibited, and talented director who can drive the audiences up to the level of pure thrill and exultation, and he also succeeds in topping himself as well as what has followed since his Mad Max movies. He has a nice action movie plot to drive forward, he really knows how to push the envelope with advanced filmmaking techniques, and he does deliver one hell of electrifying work which makes many lesser action movies look trivial and forgettable instantly. 2015 is far from being over at this point, but I think “Mad Max: Fury Road” will be the best action film of this year.

This entry was posted in Movies and tagged action, Dystopia, SF. Bookmark the permalink.