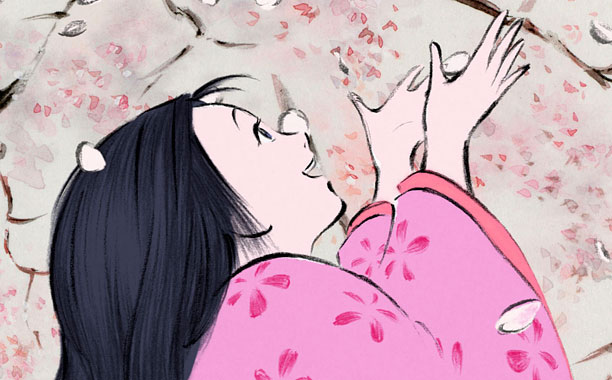 Japanese animation film “The Tale of Princess Kaguya” dazzles us with elegant style to enjoy and haunting tale to reflect on. Based on the 10th century Japanese folk tale “The Tale of the Bamboo Cutter”, this simple but superlative animation film entertains us with lots of lovely moments, and then it touches us with its poignant story about a good-natured heroine who simply wants to be happy and live as herself.

The first act of the film is about how she was found and raised by her foster parents. When an old bamboo cutter (voiced by Takeo Chii, who died not long after finishing his work on this film) is working in a bamboo forest near his country village as usual on one day, he encounters a strange incident; a bamboo suddenly glows, and then a bamboo sprout quickly grows near that bamboo, and he discovers a miniature girl inside that bamboo sprout. Enchanted by this little girl who looks fragile in his hand, the Bamboo Cutter brings her to his home to show her to his wife (voiced by Nobuko Miyamoto), and then, to their surprise, this little girl is suddenly transformed into a baby they can hold more easily.

It becomes pretty clear to everyone that she is not an ordinary girl at all. She grows so rapidly like a bamboo that it does not take much time for her to walk for herself, and she soon gets her nickname: Little Bamboo. Although there is something odd about Little Bamboo (voiceed by Aki Asakura), she and other kids in the village hang around together well thanks to her spirited innocence, and then she comes across a village boy named Sutemaru (voiced by Kengo Kora) during another pleasant day of her life. She was like a little sister to him at first, but, as watching them having more time together, we can see that their mutual attachment may grow into something more matured someday.

Meanwhile, the Bamboo Cutter gets a sort of messages that Little Bamboo is indeed a special girl he must take care of well. Some mysterious force sends him a considerable amount of gold along with heaps of priceless dress material, so he buys a huge mansion in the Capital, and everything is rapidly changed for Little Bamboo as soon as she leaves the village with her foster parents. Now she and her parents live in a far more affluent environment while served by many maids and servants in their big mansion, and she also begins her education as a future noblewoman under the tutelage of her fastidious teacher Lady Sagami (voiced by Atsuko Takahata).

Of course, that does not go very well with a spirited girl like Little Bamboo, who does not have much interest in becoming some nobleman’s wife. She succeeds in relieving her teacher and her father through her natural grace and talent, and she gets her formal name ‘Princess Kaguya’ when she grows enough to be recognized as an adult woman, but then there is a heartbreaking moment when she happens to eavesdrop on several male guests’ rude comments on her during a big party celebrating her christening. In one of the most memorable moments in the film, we see her painful feelings virtually erupting with wild, bold animation style; her inner conflict feels palpable to us through raw, dynamic motions of character and background on the screen, and then the movie finds a way to regain its gentle composure in a way both surprising and effortless.

For her father, Princess Kaguya decides to accept her situation while finding a loophole. As the words about her beauty and elegance are spread around the Capital, a bunch of potential suitors gather in front of the front gate of her house everyday, and she is soon visited by a group of powerful noblemen eager to marry her. In a very funny moment, she shrewdly uses their own flattering words against them, and that leads to more hilarious moments later in the story.

One particular scene is simply masterful in its execution. As listening to a man attempting to appeal to her emotionally, Princess Kaguya begins to have a doubt on whether she really should stick to her position, and we comes to see a growing certain possibility as she listens more to this guy. I will not go into details about how this scene will end, but let’s say that its dramatic payoff is very funny and then becomes very sad with our increasing sympathy on Princess Kaguya, who might have been happier if she had just been allowed to be herself with no pretension as living in her old home.

The movie is directed by Isao Takahata, who has been a prominent figure in Studio Ghibli like his fellow director Hayao Miyazaki. Takahata’s most famous work is “Grave of the Fireflies” (1988), and it is probably the saddest animation film I have ever seen in my life. That film is very powerful as a harrowing war drama about two young siblings gradually pushed into the deep bottom of despair by the harsh reality of war, and, though I only watched it twice a long time ago, I still vividly remember many of its sad, tragic moments which make its depressing opening scene look more like a happy ending whenever I reflect on it.

Takahata has been relatively silent for more than 10 years since his last major work “My Neighbors the Yamadas” (1999), but “The Tale of Princess Kaguya” shows that Takahata, who will be 80 in the next year, is still at his prime. Its fabulous hand-drawn animation evokes the texture of Chinese watercolor paintings while amusing our eyes with small and big details to notice on the screen, and I also like some nice visual touches on its broad supporting characters including Princess Kaguya’s maid, who becomes more lovable as we see more of her.

The story and characters in the film are also handled with care as remained simple and direct. While he loves Princess Kaguya as much as his wife, the Bamboo Cutter is not sharp enough to see how he comes to push his precious daughter into unhappiness, and we understand how he comes to confuse his social success with his daughter’s happiness. His wife knows better as a wise woman, and she provides her daughter a private place where they can relax themselves in their former lifestyle for a while. The Japanese cast for the original version did an excellent job in their voice performances, and notable Hollywood actors including Chloë Grace Moretz. James Caan, Mary Steenburgen, Lucy Liu, Beau Bridges, James Marsden, Oliver Platt, and George Segal provided character voices in case of the English version of the film.

While the future of Studio Ghibli recently becomes rather uncertain especially after Miyazaki’s retirement followed by his last work “The Wind Rises” (2013), “The Tale of Princess Kaguya” reminds us that there are still magic and wonder to watch from this legendary animation film studio. Considering its finale coming with fateful inevitability, I wonder now whether “The Tale of Princess Kaguya” will be Takahata’s Swan song in the end, but I guess we should be happy for now at least to see such a terrific work from an old master who has not lost none of his skills yet.

This entry was posted in Movies and tagged Animation Film, Fantasy, Folklore. Bookmark the permalink.