“The Selfish Giant” is a tough film to watch from the start. Like others surrounding them, its two young heroes are hopelessly stuck in  their grim, harsh world at the fringe of society, and it is really depressing to watch them being drifted to the future with no hope or happiness. The movie is not entirely without warmth or humor, but this is ultimately a gloomy film packed with desperation and sadness, and it will strike you hard with a number of powerful emotional wallops generated from its stark realism.

As mentioned at the beginning of its end credits, the movie was inspired by Oscar Wilde’s famous fable “The Selfish Giant”, but you will not see much of the similarity between that gentle fable and the movie itself, though a number of connections can be easily made between them. While it does not look bad at first, an impoverished neighbourhood of Bradford, Northern England is as barren as the selfish giant’s solitary garden on winter days, and its people are mostly at the bottom of their life while struggling to make a living through any possible ways or just idling away with their passing miserable days. Nobody seems to have proper job, and it looks like collecting and selling scraps is the only way to earn some money to live through another hard day.

The movie observes this shabby life through Arbor (Conner Chapman) and Swifty (Shaun Thomas), two different young boys who have been always close to each other and have sort of complemented each other as a contrasting duo. Arbor is a short and hot-tempered boy who clearly has some behavioral problem (he has been medicated for that), and Swifty is a taller and chubbier boy with gentle, passive attitude which makes him an easy target for bullying at their school. Whenever watching them hanging around together, you cannot help but think of many famous mismatched duos such as Laurel and Hardy – or George and Lenny in John Steinbeck’s “Of Mice and Men”.

We see how their close friendship has been a respite from their unhappy life. Arbor’s addict brother Martin (Elliott Tittensor) always brings troubles into Arbor’s home, and their mother Michelle (Rebecca Manley) looks already exhausted and overwhelmed by the hardships in her daily life, and the same thing can be said about Swifty’s mother (Siobhan Finneran), who also looks doomed in her domestic life filled with her crummy husband and a bunch of their kids. Both of these tired mothers sincerely want their sons to get a better chance of life denied to themselves, but, to their despair, life does not go well for them and their sons again; Arbor is expelled from the school after his latest trouble caused by his attempt to protect Swifty from bullying kids, and Swifty may go along with his friend if that is what he wants.

They begin to collect scraps to earn money for themselves, and then they get involved with Kitten (Sean Gilder), a local scrap dealer who is not as cute as his nickname suggests. He lends them his horse and cart for collecting more scraps, but he always demands the fee for that while making sure that he gets enough profit from the scraps collected by the boys. Like other unscrupulous scrap dealers in his neighbourhood, he is willing to use any chance to earn extra profit no matter how unethical and illegal it is, and he makes Arbor and Swifty steal expensive electric cables from nearby railways and power utilities, just because they are suitable as minors to be exploited (As told to Arbor at one point, stealing cables is a serious crime, but minors will be punished lightly even if they get caught).

And he also sees another chance of profit from Swifty when he finds that Swifty has a natural talent in handling horses. There is an impressive sequence which shows his horse competing with the other horse during an illegal harness racing on the highway, and the movie patiently builds the tension and excitement along the race course as closely watching these poor animals and their handlers virtually being pushed by the loud, cheering crowd on following vehicles. You may have some worry while watching this sequence, but, as far as I heard from others, no animal was harmed or endangered during the shooting. 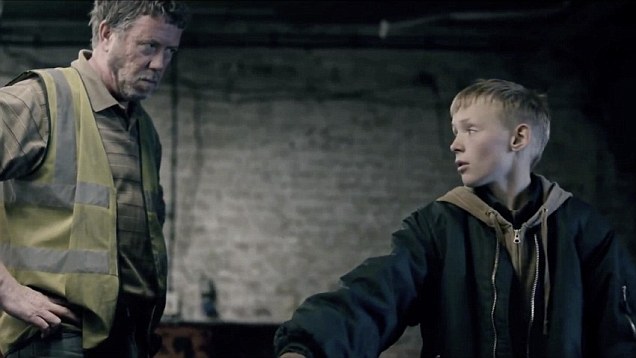 The movie is the first feature film by the director/writer Clio Barnard, and she shows here that she is a talented director to watch. Through the modest but admirable realistic approach reminiscent of Ken Loach’s works and other British kitchen sink dramas, she lets us be involved in her story and characters, and we gradually see the indirect social commentary behind them. The failure of the system is evident as we observe things through the viewpoint of her characters, and their gray environment represented by tall power transmission towers and imposing power plant buildings constantly reminds us of the hopelessness of their life condition which promises nothing but the depressing inevitability to come. They hope that they want to go up with their own life, but, as you know, life is not as easy as they think, and the harsh reality of their life is bound to strike them in one way or another.

Its young lead actors, who had no previous acting experience, are simply superlative thanks to not only their unadulterated performances but also the natural chemistry between them. Conner Chapman is terrific as a compelling mix of defiance and innocence; Arbor is a tough kid who can hold his brash attitude in front of two visiting policeman during one amusing scene, but we can still see a little vulnerable boy behind his cocky swaggers. Shaun Thomas is equally good as bringing pathos and poignancy to his gentle character, and he is especially wonderful when Swifty quietly struggles with his conflicting emotions right after an incident which he believes his friend is responsible for. Chapman and Thomas are supported well by the adult actors surrounding them; Sean Guilder has his own moment when his unlikable character has to accept the consequence of his heartless action, Rebecca Manley and Siobhan Finneran are also commendable as the mothers with many things to worry about besides their problematic sons.

Like many of its senior films, “The Selfish Giant” has a sudden dramatic plot turn to strike both its characters and the audiences around its third act. I was not so surprised by that, but then the movie surprised me with the resulting emotional resonance which stayed on my mind very long after it was over. As I said before, this movie is a hard stuff, but it is a very well-made film with considerable power and realism, and that makes it quite worthwhile to watch in spite of its gloomy subject.

This entry was posted in Movies and tagged Family, Friendship. Bookmark the permalink.