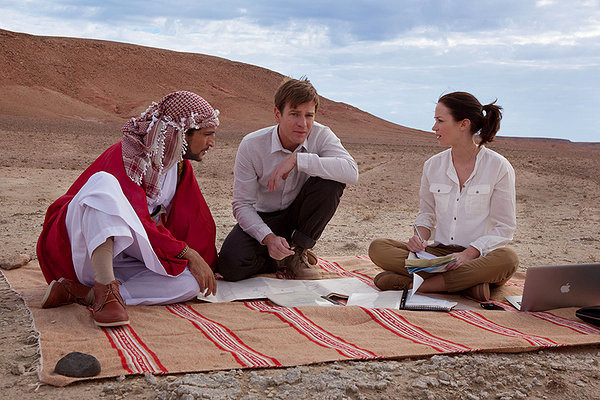 “Salmon Fishing in the Yemen” is not as whimsy or outrageous as its odd title suggests, and that was a little disappointment for me. The movie is a mild, pleasant comedy, and there is nothing wrong with that, but, considering the rich potential of satire inside its amusing premise, I cannot help but wonder whether it could have pushed itself further for more laughs and amusements. After all, a film about salmon fishing in the middle of desert is surely something we do not see everyday, isn’t it?

That outrageous idea comes from Sheikh Muhammed (Amr Waked), a Yemeni prince willing to realize his ‘vision’. He enjoys salmon fly fishing at his estate in the Scotland Highlands so much that he becomes determined to introduce it to his people, and he is planning to spend at least 50 million pounds for that. There are probably many better ways to spend such a huge amount of money for his country, but I guess anyone has a right to throw away his money as he wants no matter how much it is.

At the beginning, we see his financial adviser Harriet Chetwode-Talbot (Emily Blunt) approaching to Dr. Alfred Jones (Ewan McGregor) for technical advices. Not so surprisingly, Dr. Jones initially thinks the project is ‘fundamentally unfeasible’ for a number of good reasons, but, as spending more time with Harriet and the Sheikh, he gradually comes to believe that this preposterous folly can be succeeded if they try under a right condition. It goes without saying that the environment in Yemen may not be appropriate for salmons to inhabit and reproduce, but enough amount of water can be provided through a big dam built for irrigation (it does rain in Yemen although it is not quite often), and transporting 10,000 salmons to Yemen can be easily done once they are secured. 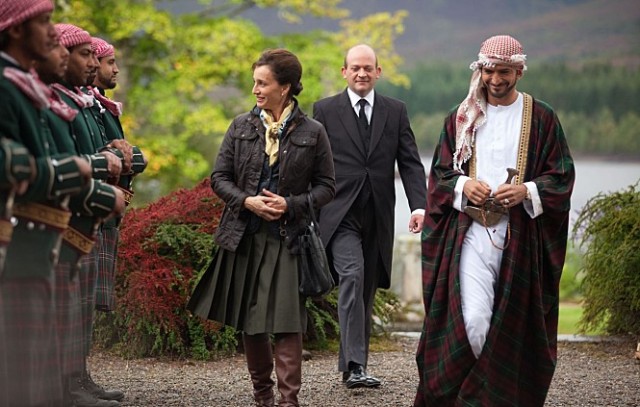 The most amusing part in the movie comes from how the people in the British government respond to this absurdity, and Kristin Scott Thomas simply steals the show as Patricia Maxwell, British Prime Minister’s no-nonsense press secretary. As looking for any chance to improve their public image (while a disastrous mosque bombing has just happened in Afghanistan, their Foreign Secretary gets himself into a damaging sex scandal), Maxwell recognizes a good possibility from the Sheikh’s project, so she immediately persuades the Prime Minister to support the project in public even though she probably knows well how absurd and impractical it is. While constantly maintaining her usual prim attitude, Thomas always brings a dry sense of humor into her scenes, and the movie becomes a little more satirical whenever she appears on the screen.

However, the movie focuses more on a developing relationship between Dr. Jones and Harriet, and what we get here is your average British romance in which both sides hold their feelings even when it looks apparent that there is something going back and forth between them. As they spend more time together as colleagues, Dr. Jones and Harriet come to like each other more than before, but then there are some complications which put the distance between them. While Dr. Jones has been increasingly estranged from his wife Mary (Rachael Stirling), he is rather reluctant to end their lifeless marriage like his wife. Harriet becomes distraught when she learns that her current boyfriend Robert (Tom Mison) was possibly killed during a covert military mission in Afghanistan, but she also finds herself drawn to Dr. Jones as he clumsily but kindly consoles and comforts her.

Meanwhile, in spite of several setbacks including a funny backlash from angry British anglers and an assassination attempt by a Yemeni terrorist group which is not so pleased with how the Sheikh tries to change their nation, things are getting done step by step. A stream is created in a dry desert valley, and heaps of salmons are brought and ready to be released into the stream, and Dr. Jones and Harriet hope that those salmons can swim upstream along the stream even though they are not wild ones. 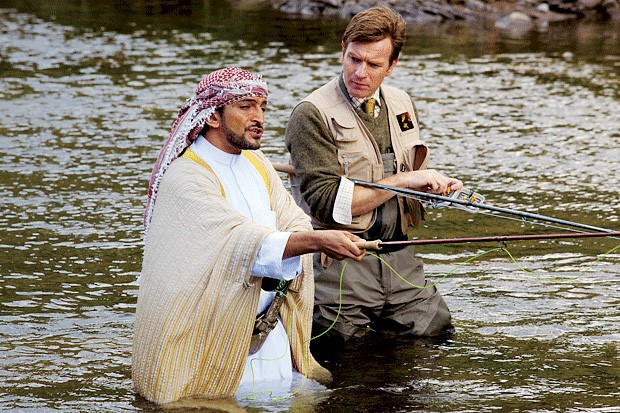 In case of the Sheikh, this amiable guy sincerely wishes for something good to be achieved through his project, but the movie never clarifies what he exactly reaches for, and, though speaking like a wise man with good will, he sometimes look like a misguided man who wastes a chunk of his wealth just because he can. There are a few moments of absurd humor in the film such as the Sheikh’s servants wearing both keffiyeh and kilt at his countryside estate, but the screenplay by Simon Beaufoy, which is based on Paul Torday’s novel, sticks to its mild attitude while satirizing no one, and the movie never goes deep into the social/political matters glimpsed behind its story. The social inequality in Yemen is merely implied during one brief scene, and a local terrorist group is more or less than a plot element required for the big scene later in the story.

Since “My Life as a Dog” (1985), which was his international breakthrough, the director Lasse Hallström has steadily stayed in the mainstream of Hollywood while making a number of solid works such as “What’s Eating Gilbert Grape?” (1993), “The Cider House Rules” (1999) and “Chocolat” (2000). Although “Salmon Fishing in the Yemen” is not as good as them, the movie is not without enjoyable things, and Ewan McGregor and Emily Blunt has a nice low-key chemistry between them to engage us.

But the movie still feels a little too mild and passable for me to recommend it to you. I have not read Torday’s novel, but I heard from others that the novel was a satire, and I think the movie could have worked better if it had been equipped with more edges. As a romantic comedy film, it is gentle and likable, and you can spend a fairly good time with its warm, soft mood, but the movie seems to forget how silly it is to introduce salmons into an artificial ecosystem which has no other aquatic animals from the start. That is an inherently funny story material indeed, but the movie only dips its feet into its premise, and that is all we can see. 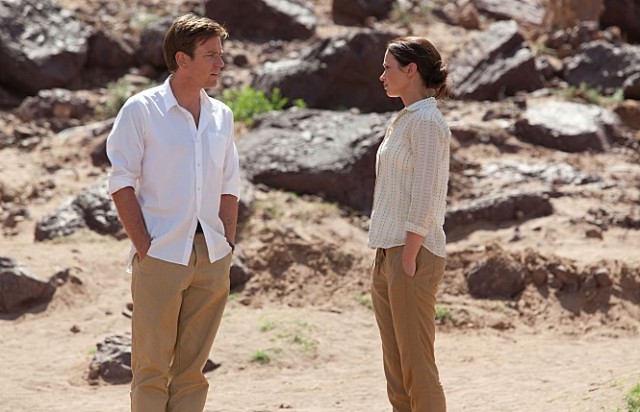 This entry was posted in Movies and tagged Comedy, Fishing, Romance, Scientist. Bookmark the permalink.