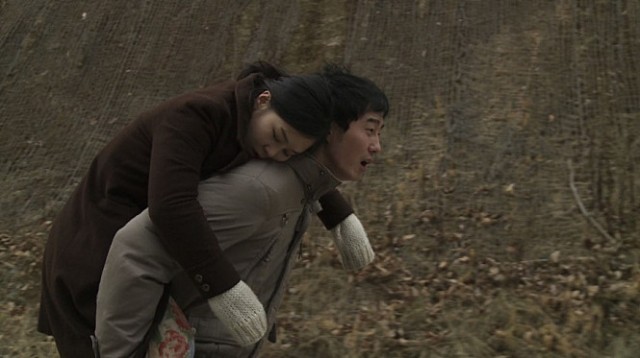 “Lebanon Emotion”, a South Korean independent film which was released in South Korea early in this month, quietly meanders around its background at first and then goes into an unexpected direction through its odd, somber mix of romance and thriller. The story is simple; it is cold, lonely outside, and two unhappy people happen to come across each other under an unlikely circumstance, and they eventually find themselves warming to each other, while it becomes more apparent that something will happen sooner or later.

The movie starts with Seong-ho(Choi Seong-ho), a young man still struggling with his deep grief caused by the recent passing of his ailing mother. It has been a year since she died, but he does not feel better even after letting out his grief when he is alone at the cemetery, and he even attempts suicide when he is staying at his acquaintance’ apartment alone. He fortunately fails, but he is still alone and depressed while it gets colder outside. Although the apartment building is located in some local town near a snowy mountain, the town looks to be devoid of people except the workers at the construction sites near the mountain, and only town resident we see in the movie is a disturbed babbling guy who does ice fishing every day around the base of the mountain.

On one day, Seong-ho hears a scream from somewhere when he is near the mountain, and he soon finds out what has happened. When they went to the mountain on the first day, his acquaintance showed Seong-ho his steel trap set for hunting roe deer in the mountain, and Seong-ho discovers a woman caught by that trap. He instantly releases her from the trap and then takes this injured woman to his staying place, even though he does not know at all about who she is or why she does not want her accident to be notified to the police.

We know her reason, for the movie takes us right to what happened before she got trapped. She has just been released from prison after serving her time, and she is frustrated to see that there is no one to welcome her – even her own sister does not want to see her at all. As following her plight, we also get to know a bit about a guy who was probably her partner/lover in the past, and this vicious man is someone you can’t possibly mess with. When she vehemently expresses her anger to him during their phone conversation, he becomes determined to track her down and confront her, and he starts his tracking as soon as he happens to learn where she is.

While feeling as bleak as its wintry background, the movie is not entirely humorless, and it has a fair share of darkly amusing moments thanks to Jang Won-young’s humorously twisted performance as the villain of the story. His voice is quiet and placid, but his eyes reveals a man fueled by cold aggressiveness behind his stern face, and you know he will not be stopped until he is finished with his personal business. There are a number of characters who unintentionally stand on his way in the movie, and one of these unfortunate guys comes to pay a big price for annoying him during one violent scene. You may feel a little sorry about him, but it goes without saying that he had it coming – and he richly deserves it for a good reason.

While these unpleasant things are happening outside, the movie also focuses on the growing feelings between Seong-ho and the woman as they spend some time together inside his staying place. As soon as he arrives in the apartment with her, he applies a bandage on her wounded ankle, and he even lets her stay in the apartment until her wound is healed. They go out together for having a lunch later, and Seong-ho also buys clothes and underwears for her.

She emphasizes that she will just stay for a few days, but they slowly begin to recognize each other as the lonely souls going through each own personal difficulty. When they have a dinner together in the apartment, the mood on the screen is slightly heated through the soft, warm lighting over their dinner table and their faces, and they become a little more opened to each other as having a conversation. In their restrained performances, Choi Seong-ho and Kim Ji-wook are good at suggesting what their characters are reluctant to talk about; although we know little about her character, Kim Ji-wook gains our sympathy as a good woman damaged by her mistakes and hardships, and there is a poignant moment when her character silently realizes that there is not much difference between her and the man who helps her without demanding anything to her.

The movie is the first feature length film made by the director/screenplay writer Jeong Young-heon, and he deftly establishes moods and characters in his film while giving several good moments to be appreciated. His hero’s chilly dream sequence unfolded on a wide snowy field is not only haunting but also revealing in its simplicity, and we come to understand more about how much Seong-ho has been grieving; he desperately wants to let his aching feeling of loss go, but he keeps being haunted by the memories of his mother even when he tries to get away from them. The low-budget quality of the movie is noticed from time to time, but Jeong Young-heon wisely uses that limit to create the feeling of isolation and loneliness with his handful of actors, and the result is a stark but interesting piece of work showing lots of potential inside this first-time director.

Oh, by the way, I forgot about explaining the title of the movie to you. As recognized in the movie, its title is from a Korean poem “Lebanon Emotions” by Choi Jeong-rye, but, as far as I heard from others, it seems that there is not any notable connection between the poem and the movie. I have no idea on why the director decided on that title or what he intended to imply, but he made a nice little film, and I am all right with that in spite of my bafflement toward its title. 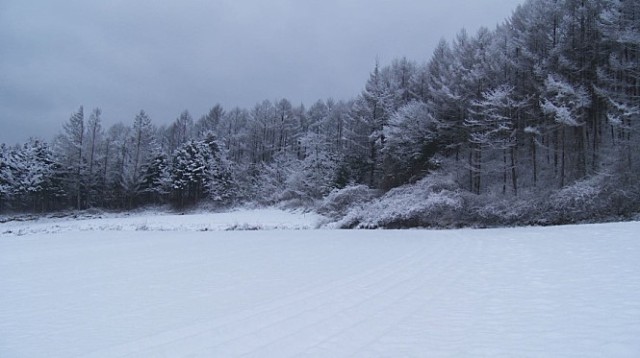 This entry was posted in Movies and tagged Romance, South Korean Film, Thriller. Bookmark the permalink.