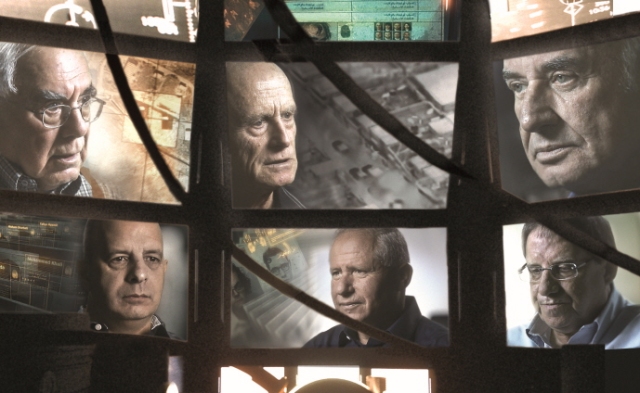 The interviewees of Oscar-nominated documentary “The Gatekeepers” have fascinating stories to tell. They worked behind the scenes as the soldiers of a long, messy conflict still continuing at this point, and they are quite willing to talk about those turbulent years of their secret agency – and their serious concerns over the future of their country.

They are Avraham Shalom, Yaakov Peri, Carmi Gillon, Ami Ayalon, Avi Dichter, and Yuval Dichter, and they all are the ex-directors of Shin Bet, the Israel Security Agency(ISA). Since it was formed in 1949, the agency has mainly taken care of the internal security issues including terrorist threats or protection of high-ranking government officials, and most of its operations were kept in secret along with its covert agents as reflected by its motto “the unseen shield”.

While shuffling between these six interviewees, visual records, and CGI recreations, the documentary presents us a sober picture of the ongoing conflict between Israel and Palestine viewed through these interesting people, who are quite candid about each own circumstances and deeds during their tenures. They do not evade or deny at all as describing what they had to do as their duties, and the director Dror Moreh only throws a few questions around the end when it seems necessary.

As listening to their stories, we come to know more about how the conflict was initiated and then has been developed into such a mess frequently reported on the global media. Not long after the Israeli army took over the Gaza strip and the West Bank area during the Six-Day war in 1967, Israel faced the resistance of the residential Palestinians in these two territories, and Shin Bet started to take the main role in this conflict. They monitored possible threats as creating the massive profiling database of any suspicious Palestinians to watch, and they also diligently searched for any useful sources of valuable information among their enemies.

The system itself worked as the major force at the front line of this hidden war, but the surrounding situation got worse along with the escalating violent responses exchanged between Israel and Palestine, and the interviewees tell us how they succeeded or failed as recognizing the gray moral aspects of their works. While torture became an available option for gaining information during interrogations, they found themselves on the thin line between saving and killing people. One of the interviewees talk about one uncertain situation where the matter of life and death can be irreversibly decided by their single decision; if there is the possibility of collateral damage, should they approve of the attack to save their civilians or abort the mission to avoid the possible failure/disaster which can cause more than public humiliation for Shin Bet?

They also had the other problem besides resisting Palestinians, and one of the interesting things shown the documentary is how Israeli government has indirectly induced and nurtured its own extreme factions to only make their circumstance worse later. The Israeli government deliberately overlooked its illegal settlers who pushed into the West Bank and Gaza Strip with no consideration of Palestinians, and the far-right wing zealots could get away with their terror attempts on Palestinians mainly because these guys were mostly connected well with the government; even when they were arrested by Shin Bet and then tried at the court, they only received minor sentences and soon returned to the society while assuming their prominent social roles again.

Some of them look alarmingly fanatical when they talk in front of the reporters, and we are told that there was actually the horrible plan of a big, sensational terror on Muslims, which, if they had succeeded, would certainly have made Israel as unpopular as, say, Osama bin Laden after 9/11. Around the time Yitzhak Rabin was assassinated, they kept voicing their strong, aggressive opposition against the Oslo I Accord, and some politicians, including the current Israeli Prime Minister Benjamin Netanyahu, indirectly propelled this blind hostility based on that familiar sectarian mentality of “It’s us or them.”

The death of Yitzhak Rabin, who is respected and admired by all of the interviewees, threw a big shock on Shin Bet for their failure to prevent the assassination, and the problems to be handled by them kept growing as ever while that small but precious chance of peace and coexistence was blown away. Yasser Arafat and PLO belong to the past now, but more extreme factions such as Hamas fill the space, and they are more difficult to handle; how can you deal reasonably with a group of fanatics ready to die for their cause with no compromise?

There have been some successes while they tried to eliminate the main members of these terrorist groups through various means(In one famous case, it was executed through a small but lethal bomb planted on the cellular phone belonging to the target), but nothing has been accomplished except more chaos and violence between Israel and Palestine since the Oslo I Accord was virtually broken. All of the interviews agree that Israel has been unwisely pushing itself into more difficulties(“we win every battle, but we lose the war.“), and, though individually expressing different thoughts and opinions, they all strongly emphasize the need of the open talk as attempted by Rabin and Arafat.

“The Gatekeepers” is a detached but engaging documentary both informative and revealing to us. As the story told from the Israeli perspective, the documentary makes an interesting contrast compared to another excellent documentary “5 Broken Camera”(2011), a sad, touching visual chronicle of Palestinian farmer which was incidentally Oscar-nominated along with “The Gatekeepers” early in this year. While they are opposite to each other in their respective positions, they ultimately hope for the same thing, and both powerfully remind us that the circumstance is not hopeless yet. It still looks not that good in Palestine, but there is always hope considering that people can learn and open their eyes even if they are not changed.