Observing the unstable heroine of Woody Allen’s “Blue Jasmine” is akin to looking into a miserable mess beyond repair. While she had already been mired in self-delusion when her world suddenly collapsed, she still remains in that pathetic state even when she reaches for a chance for restart, and that is why the movie is morbidly compelling to watch although we don’t want to be around her even for 5 minutes.

With Tennessee Williams’ “A Streetcar Named Desire” as its major inspiration, the movie comes to us as one of the darkest stories from Woody Allen, who came back to US for this film after making several films in Europe. While the story is not entirely devoid of humor and the soundtrack feels as pleasant as its locations around San Francisco, this is essentially the tragedy of a deluded woman trapped in her hopeless situation by none other than herself, and it is sometimes not easy to laugh even though we clearly see how silly she looks as she is heading to another bottom point already set for her from the start.

Jasmine Francis, played magnificently by Cate Blanchett, had been the wife of a successful financial business man in New York, but things got pretty disastrous for her and her husband Hal(Alec Baldwin) recently. The luxurious life style they had enjoyed for years was in fact supported by Hal’s massive financial fraud, and her comfortable world was turned upside down as soon as her husband was arrested by FBI on one day.

Almost broke as a consequence, Jasmine decides to leave New York and flies to San Francisco for a new chance, but it does not look hopeful much to us, if not her. She has never had any real job since her marriage, and her plan to be a certified interior designer sounds quite unrealistic to say the least, and she has a serious mental problem as shown during the opening scene in which she keeps talking about herself and her life even though an old lady sitting next to her in the plane is not listening to her at all. Her unstable mind sometimes seems to go back to her luxurious years in New York, and that naturally makes the people around her baffled or embarrassed.

At least, it is lucky for her that her younger sister Ginger(Sally Hawkins) lives in San Francisco and can provide her a place to stay for a while. Like her ex-husband Augie(Andrew Dice Clay), Ginger has lots of reasons to be angry about Jasmine’s recently deceased husband(he killed himself in prison), but, as a good sister, she lets Jasmine stay in her house although she sees that her sister is not changed much despite her crumbled position. Jasmine laments about how she becomes far poorer than before, but it seems to never cross her mind that she could have saved some money for her if she had not bought the first-class airplane ticket.

The movie goes back and forth between Jasmine’s pathetic present in San Francisco and her splendid but equally pathetic past in New York. Besides being a Wall Street crook, her husband was a lying philanderer, and everyone around Jasmine knew about his affairs as well as some dirty business behind his back, but she virtually chose to be deceived by not only him but also herself. Literally bathing in luxury, she could get anything she wanted thanks to him, and she was comfortable with that while looking down on her sister and brother-in-law.

Not so surprisingly, she instantly looks down on Ginger’s recent boyfriend Chili(Bobby Cannavale), a local mechanic whom she thinks is not good enough for her sister. Mainly due to her sister’s influence, Ginger finds herself drawn to Al(Louis C.K.), an amiable guy who looks more gentle and caring than Chili, and Jasmine also meets her possible second Mr. Right through an accidental encounter at one party.

You can easily guess how the things will turn out in the end especially if you are familiar with Tennessee Williams’s play, but Woody Allen presents his heroine as a memorably incorrigible case study, and Cate Blanchett’s terrific performance elevates the story to a grand tragicomedy. Like Charlize Theron in Jason Reitman’s “Young Adult”(2011), which was also a dark comedy about a pathologically self-deluded heroine, Blanchett goes all the way to play an unlikable character we can hardly identify with, and she is consistently fascinating to watch as revealing her character’s many unhinged sides. Like she turned a blind eye to what was going on around her in New York, Jasmine does not even try to face her problems while continuously ingesting alcohol and pills, and that only causes her circumstance to get worse than before.

Woody Allen assembles the nice supporting cast around Blanchett. Sally Hawkins is fabulous as a realistic counterpart to Blanchett, and Bobby Cannavale and Andrew Dice Clay are solid as two ‘brutish’ working class guys immediately reminding us of Stanley Kowalski. Alec Baldwin gives his despicable character slick quality as required, and Michael Stuhlbarg is a dentist who comes to have a very misguided notion about his newly employed receptionist, and Peter Sarsgaard is a young diplomat whose wholesome political ambition is definitely not compatible with Jasmine’s checkered past.

While making many enjoyable comedy films, Woody Allen has made more serious attempts in his long, illustrious career, and “Blue Jasmine” can be viewed as one of them although it can be interpreted as a comedy. Beneath its laid-back humor, there is a dark, hopeless tragedy at its center, and the movie could be a lot more depressing experience if it were not for Allen’s lightweight approach. She is stuck on a streetcar named delusion, and I doubt she will ever get off from it. 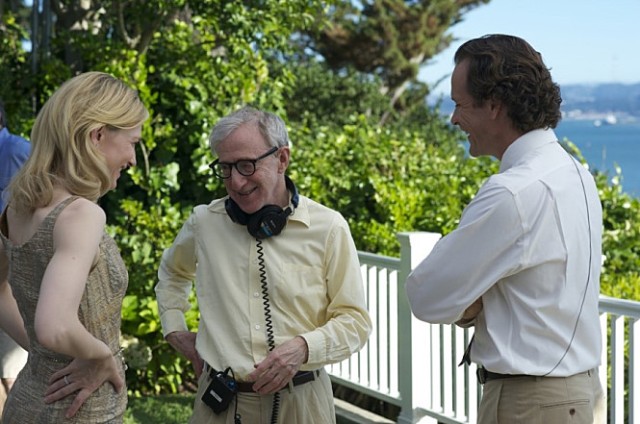 This entry was posted in Movies and tagged Comedy, Mental Illness, Sisters. Bookmark the permalink.