Our life is filled with our mistakes and following regrets. Even though I live only for around 29 years, I look back at my 11-year-life at the campus and always feel regretful about several feel-bad moments in my past. It is possible that 2012 may be my last year inside the ivory tower named KAIST, and I ask myself frequently: could I have done it better? Could I have not done that? I always get the same answer: yes, I could have made me and others a lot happier and also could have made my life better than now.

Barney Panofsky(Paul Giamatti), the ordinary hero of “Barney’s Version”, probably asks these questions to himself many times when he is alone with his cigars and whiskey, but I can tell him that his life was not that bad despite his several irreversible mistakes. He met three women in his life, and, though all of his three marriages were failed, he had some moments of happiness while going through his married life; after two failures, he enjoyed his family life along with his third wife and their two children they love , and everything seemed to be fine. However, the happiness of our life always has an expiration date, and the closing chapter inevitably is approaching to him.

Quite old at present, Barney is not so happy. His third wife left him and has married the guy he does not like much. In addition, a certain book is going to be published to damage his remaining reputation. The book is about some unsolved case associated with him in the past, and the author, an ex-cop who investigated the case at time, alleges that Barney, his prime suspect, got away with murder. What happened at that time?

But the movie is not a mystery story. Even Barney seems not to know what exactly happened on that fateful day with his alcoholic writer friend Boogie(Scott Speedman). Moreover, to him, the incident was just one of many unfortunate things in his life which he looks back frequently in his aging mind. For instance, when he was young about thirty years ago, he married a lively but unstable girl named Clara(Rachelle Lefevre) because she said she had his child. Their short marriage life begins to crumble like comedy and then is shattered like tragedy. Barney feels remorseful about that, and the conversation with his father-in-law(Saul Rubinek) does not help him much. 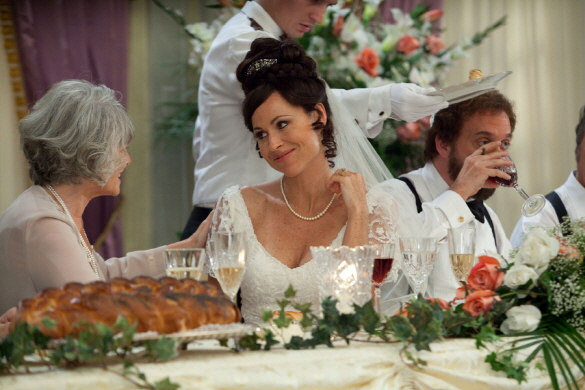 But he is young at least, so the second chance naturally comes to him while he begins to settle in Montreal while working in a TV soap drama production company where he will work for more than 20 years(by the way, who did choose its name, “Totally Unnecessary Production”?). Through the matchmaking job of his uncle, Barney meets a woman with good education and good background(Minnie Driver), but, right after the wedding, he realizes he has made a serious mistake , because he thinks he has just found his true love from Miriam(Rosamund Pike), who happens to attend the wedding party with a family member. What an unlucky guy he is – but he makes a daring choice which is pretty unwise but probably feels right to him at the moment; though he does not know anything about her, he immediately follows her all the way to the train station.

What I described to you above is only one part of Barney’s life. While following his life story step by step, the movie, based on Mordecai Richler’s novel, frequently moves between comedy and drama. Sometimes funny things happen with smile and laugh, and then sad things happen with pain and sorrow. There is warmth and happiness, and then it is followed by bitterness and moroseness. And all of them are accumulated inside him layer by layer while the time passes and he gets relatively fuzzier than before.

Paul Giamatti, who deservedly won a Golden Globe award for his film early in the previous year, is a perfect choice for a flawed good man with lots of heart we can relate to. Barney is impulsive, irascible, blunt, and petty, but he regrets over his foolish mistakes propelled by his flaws. Yes, he screwed the relationships with the people surrounding him, but he cares about most of them and misses them after they leave him in one way or another. Giamatti dexterously controls laughs and pathos in his character, and, thanks to his good performance, the movie is watchable even when it does nothing but trudging along the plot at times. 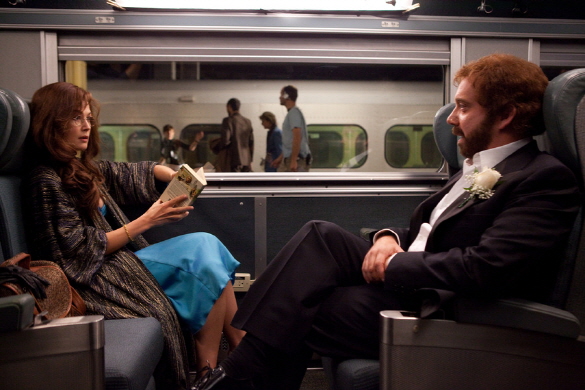 Though their characters are not as three-dimensional as him, three actresses who play the women in Barney’s life give nice performances with different colors. Rachelle Lefevre looks annoying at first, but I felt a little sorry for her character in the end. As “The 2nd Mrs. P”, Minnie Driver is funny as a shallow and selfish girl, and Rosamund Pike is warm and understanding as the most important woman in Barney’s life. Their happy marriage ends with bitterness, but there is still a feeling between an ex-husband and an ex-wife, though it takes some time for them to be good friends mainly due to Barney’s pettiness.

And there are also the warm moments between Paul Giamatti and Dustin Hoffman who plays Barney’s vulgar but loving father. Like Al Pacino’s or Robert De Niro’s, Hoffman’s recent career is not as stunning as before, but he has been far more relaxed in the recent films while receding into the supporting roles than his peers. Hoffman does a good job as a caring dad who gives some advice and lessons to his unhappy son. Barney’s father embarrasses himself sometimes, but, unlike his son, he is comfortable with his mistakes because he has been content with who he is, so he moves on with smile. The last moment of his life may be quite embarrassing to others including his son, but he will make a good joke out of that and laugh with his fellow passengers going to the other side with him. 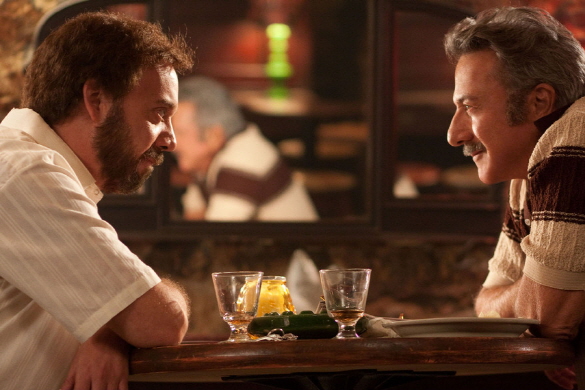 “Barney’s Version” is a funny and, ultimately, poignant drama about the ups and downs of one man’s life. It feels like condensed a little much, but I guess that is what usually happens when you try to fit one guy’s life into a film little more than two hours, and at, least, the movie succeeds in conveying the sense of passing time to us enough to feel sad about the last chapter of Barney’s life(the actors get aged well along the story with the help from Oscar-nominated makeup). In the end, that small mystery in his life is suddenly solved like a bolt of lightning in front of Barney’s eyes, but that does not make any difference to him considering his condition – and it will go away with other things in his state of mind fading into the darkness.

The movie will be released in South Korea in this month. The new title is “The Third Love”. South Korean distributors are sometimes quite lousy and tasteless in case of renaming the films they imported; for example, Woody Allen’s “Vicky Christina Barcelona”(2008) was released as “I Also Like My Man’s Wife”. Ugh.