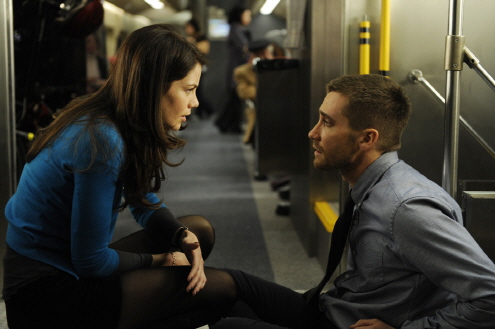 Above all, “Source Code” is something I welcome without hesitation: a smart SF thriller with efficiency and skills. Its scientific settings are a little too shaky and ambiguous, and, to be frank with you, I had to operate some parallel thinking process in my brain while following the simple storyline because of that reason, but the movie confidently, and repeatedly, moves with clear direction. It is compelling enough to hold our attention, and we accept several preposterous aspects in the story, and its relatively short running time seems shorter that it actually is.

Colter Stevens(Jake Gyllenhaal) suddenly faces the disorienting situation. As far as he remembers, he, as an American Army helicopter pilot, is doing his duty in Afghanistan. But now, strangely, he wakes up to find himself on a commuter train heading to Chicago. He sits opposite to the woman he has never met before in his life, but she talks to him as if they had been acquainted with each other. Moreover, he discovers that he is currently not occupying his own body. He is Stevens played by Gyllenhaal in our view, but he is seen as someone else in the view of others on the train.

What is happening to him? He soon gets the answer. Few minutes after the train passes the last station before Chicago, the bomb somewhere in the train explodes. Everyone dies as a result, and then he wakes up in a far different situation. He is confined alone inside the place resembling the spacecraft module. And he still cannot remember why he ends up in such a dark, solitary place like that. 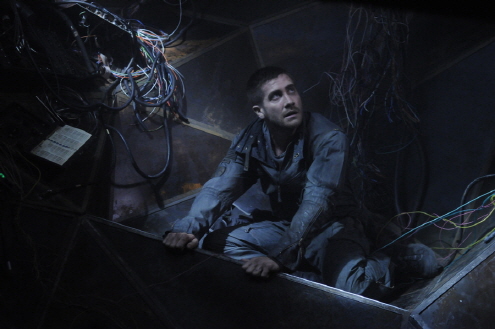 He begins to grasp his current reality through the communication line linked to the world outside. According to Colleen Goodwin(Vera Farmiga) and Dr. Rutledge(Jeffrey Wright), Stevens is in some special government facility where medical technology, computer technology, and quantum physics are combined together to develop the cutting-edge technique for sending the subject to a certain point of the past. There was a bombing incident on that train, and, utilizing the brain from one of the victims, some history teacher named Sean Fentress, they can send Stevens to the 8 minutes before the incidents(that’s the limit) again and again. It is his job to find the bomber whose terror is merely a prelude for the bigger plan targeting Chicago downtown(by the way, where do they get the information about that?).

Several questions naturally arise from this shaky premise. At first, Source Code, their software program for sending Stevens to “the past”, looks like the virtual reality based on the remaining information from Fentress’ brain, but it seems more like parallel worlds discussed in quantum physics(A voice cameo by Scott Bakula from “Quantum Leap” is one of small nice touches in the film). Stevens can freely do whatever he wants in limited time, so it may be possible to create alternative timelines.

But don’t he and others on the train exist only in the electronic world inside supercomputer? As the scientist supervising the project, Jeffrey Wright lends some believability to the story although its science is still hiding behind some scientific mumbo-jumbos. I have no idea about how it will be useful or how it will be applied to other kinds of situations, but his character is utmost serious. He is willing to get the success while knowing its cost, which, incidentally, he can ignore without much problem.

Nevertheless, the movie is very enjoyable for Ben Ripley’s screenplay does not lazily depend on the main mystery of its mechanistic plot. As many people have already pointed out, it is a thriller version of “Groundhog Day”(1993), and it does a lot more things inside the limits it sets on its story. While trying to find the bomb and the bomber amid repeated 8 minutes, Stevens also gets intimated with the woman with whom his mission always resumes. In addition, like us, he begins to be suspicious about his confounding state. He eventually learns of his limits, and he chooses to exert his free will in the limited range.

In the end, like the movie, he does lots of things in 8 minutes. I have some doubts about how it is possible, but I can say Jake Gyllenhaal is convincing as the hero going through lots of tandem repeats and accompanying developments. As the woman whom he comes to care about, Michelle Monaghan gets a basically thankless job, but she follows his steps nicely. We believe the feelings growing between them along the cycling plot. Vera Farmiga gives a subtle balanced performance as the officer who may know more than what she tells to Stevens and us; the movie leaves behind certain possibility behind her character to provoke another interesting thought.

The director Duncan Jones previously made an impressive debut with a very good SF movie “Moon”(2009), and he makes another good SF movie again. If you have watched “Moon” before, you will surely notice lots of common aspects shared by both movies, including the hero alone with repetitive assigned mission to do in the limited space, and serious questions on the individual rights and freedom in the system.

“Source Code” is a lean, clever, and efficient thriller skillfully handled by people who knows what they deal with, and I found it very entertaining in spite of several visible faults in the story. While enjoying it, my mind went back to one of the interesting moments I experienced during my tour in Chicago in last year. One day, I was fortunate to observe the actors and crews of “Source Code” making one scene for their movie in the Millennium Park. Although only few minutes are included into the movie, it took more than one hour for them to prepare and shoot the scene. They tried several ways – different camera positions or various camera movements(I immediately sensed from the camera movements that the movie was not a urban romantic comedy) or some alternative scenes that I will probably come across through DVD(or blu-ray).

In retrospect, it was fascinating, but, at that time, I was frequently bored. While sitting on the bench and waiting for capturing Gyllenhaal and Monaghan on my camera, I spent my time with some curious articles in Chicago Sun-times along with new reviews from Roger Ebert. While watching the movie at the theater on this Thursday, I could ask myself a variation of that famous question said by Mr. Ebert’s dear friend and former colleague Gene Siskel: “Is the movie I am watching as interesting as watching the actors and crews working together for more than one hour?” I can easily answer that right now. Yes, and it is more interesting.

1. Some renowned South Korean critic felt sorry about that history teacher Sean Fentress. So do I. Rest in peace, Mr. Fentress, although you can’t, partially.

2. I go to the downtown by commuter train during my tour in Chicago. While watching the commuter train on the screen, I learned 32 million dollars budget makes a lot of difference; the interior looks more polished and comfortable than in real life.