They say you should not try to fix it if it is not broken, and that saying is applied well to Chilean filmmaker Sebastián Lelio’s new film “Gloria Bell”, which is the American version of his previous film “Gloria” (2013). While not so different from the original version in many aspects, the movie stays true to what makes the original version work so powerfully and beautifully, and it certainly helps that the movie is ably held together by one of the best movie actresses in our time.

During its early part, the movie shows us the mundane daily life of Gloria Bell (Julianne Moore), a middle-aged woman who has lived alone for several years since she divorced her husband and her two children came to live their own life respectively. While she has been content with the current status of her life, Gloria is still willing to reach for more love and happiness as shown from the opening scene unfolded in a local bar, but, so far, she has not had much success, and that makes her a bit depressed as she returns to her residence alone.

However, she is not someone who can be easily daunted, and we observe how active Gloria is for living her own life as usual. For example, she contacts her two children from time to time, and there is a small humorous scene where she spends some time with her son Peter (Michael Cera), who has to take care of his baby son for a while as his wife is doing some self-discovery travel outside. At her workplace, she often cheers up a colleague with whom she has worked for many years, and I could not help but smile as watching their brief afternoon respite outside the workplace.

And then there comes what may look like a good opportunity for Gloria. While going through another usual evening at that local bar, Gloria happens to spot a guy who also seems to be interested in her, and they subsequently get quite closer to each other after the formal introduction between them. Although she knows nothing about him, Gloria lets herself swept by the mutual attraction developed between them, and Arnold (John Turturro) turns out to be quite willing to go further than a mere one-night stand. Shortly after their first encounter, he contacts Gloria for a proper date, and she certainly feels happier than usual as spending more time with him.

However, there is one big problem in their relationship. Although he has lived alone after divorcing his ex-wife some time ago, Arnold usually bends himself to the frequent demands from his ex-wife and their two daughters who are still not so independent despite being as old as Gloria’s two children, and this tendency of his comes to annoy and frustrate Gloria more and more, no matter how much she tries to understand and tolerate him.

In addition, Arnold shows a rather inconsiderate side when he and Gloria come to her son’s birthday party. As Gloria and other family members including her ex-husband Dustin (Brad Garrett) become jollier together as remembering their good old time, Arnold becomes petty and sulky in the corner, and then he commits a very rude thing which certainly hurts Gloria’s feeling while also baffling her family members.

While Gloria tries to deal with her problematic relationship with Arnold, the movie keeps maintaining its lightweight tone, and it is engaging to watch how the story continues to flow from one wonderful moment to another. Although these moments are more or less than the recreation of what was shown in the original version, Lelio skillfully presents these moments at least, and I found myself enjoying again a certain crucial moment involved with a skeleton puppet. While Gloria does not say anything during this moment, we can clearly sense her thoughts and feelings, and we are not so surprised when she later comes to give another chance to Arnold. 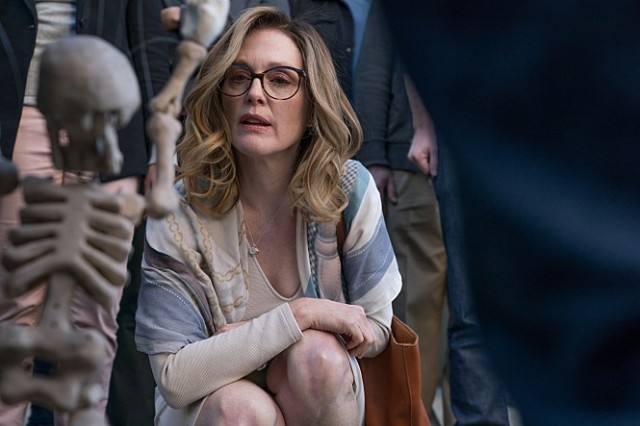 As the center of the movie, Julianne Moore gives another stellar performance to be mentioned along with many other memorable ones in her long, illustrious career. While her performance here in this film naturally overlaps with Paulina García’s acclaimed work in the original version, Moore finds her own way to present the character, and the overall result reminds me again that great performers illustrate characters instead of merely playing them on the surface.

Lelio also assembles a number of notable performers around Moore, and they fill their respective roles as much as required. While John Turturro brings some sensitivity to his increasingly unlikable character, Michael Cera, Caren Pistorius, and Bred Garrett are solid as Gloria’s children and her ex-husband, and Garrett is particularly good when his character cannot help but become emotional as looking at old family photographs. Although she only appears in a couple of scenes, Holland Taylor leaves considerable impression on us as Gloria’s mother, and Rita Wilson and Sean Astin are also fine in their minor supporting roles.

On the whole, “Gloria Bell” does not surpass the original version, but it is surely another commendable work from Lelio, who initially drew our attention with “Gloria” and then impressed us more with “A Fantastic Woman” (2017), which garnered him a Best Foreign Language Film Oscar, and “Disobedience” (2018). Although I would recommend the original version first, the movie itself is still entertaining and interesting enough for recommendation thanks to not only Lelio’s competent direction but also Moore’s superlative acting, and I think you will appreciate it more if you have already watched the original version. 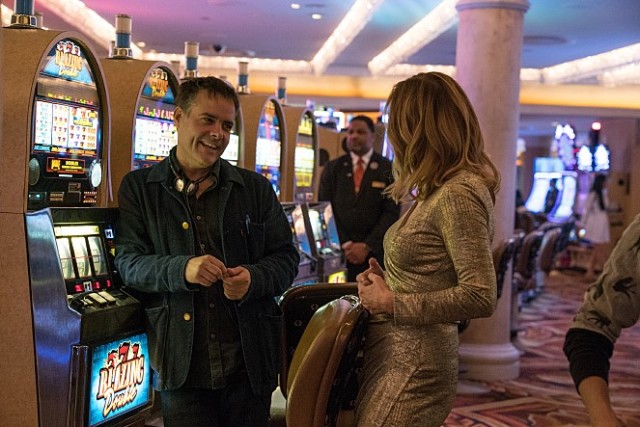 This entry was posted in Movies and tagged Comedy, Family, Romance. Bookmark the permalink.