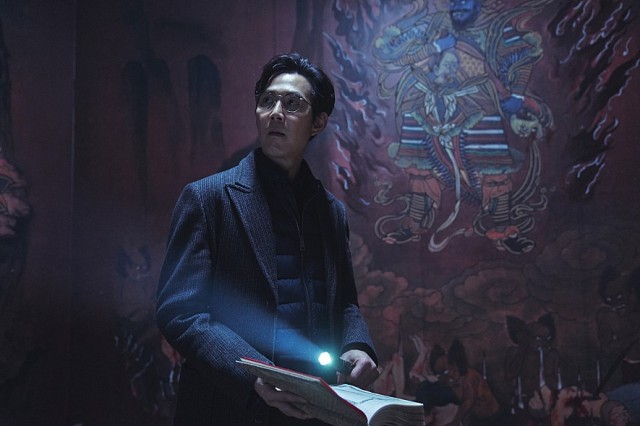 South Korean film “Svaha: The Sixth Finger” is filled with gloomy spookiness from the very beginning, and it did not disappoint me at all. While I am still not sure whether I understood all of its numerous religious details, this is an entertaining occult horror flick equipped with good mood, storytelling, and performance, and I followed its plot and characters with some curiosity and amusement during my viewing.

After the unnerving prologue sequence which has a couple of striking moments to disturb you, the movie introduces to us Pastor Park (Lee Jung-Jae), a Protestant minister who has run a small agency specializing in exposing suspicious or corrupt religious groups. Recently, a small local Buddhist cult group called the Deer Mount happened to draw his attention, and he thinks this will give him a nice opportunity to get some money from those prominent Buddhist monks, who are wary of cult groups as much as other influential religious leaders for maintaining their good public image.

Along with his assistant Yo-sub (David Lee), Pastor Park delves deeper into his latest investigation target while also getting the support and approval from those prominent Buddhist monks thanks to his friend Monk Haean (Jin Seon-Kyu), who often provides background information and knowledge to Pastor Park and, of course, us. As he investigates the Deer Mount further, Pastor Park happens to obtain its heretical scripture, and then he comes to learn more about its long but relatively unknown history, which mainly revolves around its mysterious founder who wrote that heretical scripture in question. 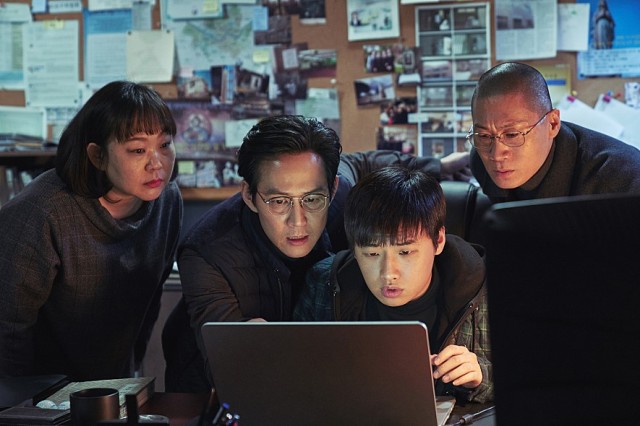 Meanwhile, the movie adds more spookiness to the story as the body of an adolescent girl is found in a nearby local area, and we are not so surprised when it eventually turns out that her death is involved with the Deer Mount. We meet a certain key cult member quite determined to do anything for what he believes, and, through Pastor Park’s ongoing investigation, we get to know more about that guy and other three key cult members, who all turn out to be very closely connected with the founder of the Deer Mount.

And there is Geun-Hwa (Lee Jae-In), a young girl living in a small rural village along with her grandparents who have taken care of her since her parents died shortly after her birth. As she already told us at the beginning of the movie, she has lived with a big dark secret since she was conceived in her mother’s womb, and that secret affects not only her and her grandparents but also the village as shown from the opening sequence.

As these three main plotlines slowly come to converge together as expected, the movie gradually dials up the level of tension, and director/writer Jang Jae-Hyun, who previously directed “The Priests” (2015), serves us a number of spooky moments to be savored. I liked how he effectively uses those vividly striking religious murals for establishing the insidious ambience surrounding the main characters of the movie, and I also enjoyed a disturbingly hallucinatory moment featuring a bunch of dark, shadowy figures crawling from the ceiling of a dark, isolated room.

I must point out that Jang’s screenplay trudges at times especially during its second half. Although it initially raises some interesting questions on good, evil, and, yes, God, it eventually comes to arrive at an ending which is a little too neat and simple in my trivial opinion, and, above all, it often tries a bit too much of exposition as if it were afraid of getting us confused or disinterested. As a result, the movie is rather uneven in its narrative pacing, and I felt impatient from time to time during its last 40 minutes. 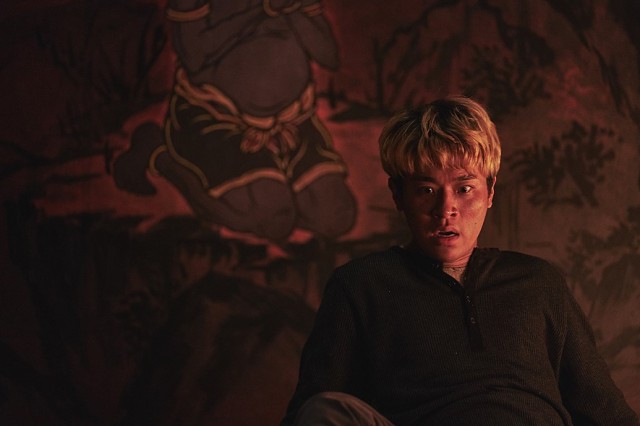 Nevertheless, the movie still engaged me with mood and details to be appreciated. I observed numerous religious details in the film with considerable fascination, and I and other audiences were occasionally amused by several small humorous scenes in the film including the awkward meeting between Pastor Park and a very influential Buddhist monk who may give him the crucial information about the founder of the Deer Mount.

The main performers in the movie diligently fill their respective roles with each own presence. While Lee Jung-jae, who was solid in “New World” (2012), “The Thieves” (2012), and “Assassination” (2015), holds the ground with his fine performance, David Lee and Hwang Jung-Min, who plays Pastor Park’s another assistant, are also effective in their supporting roles, and Jin Seon-Kyu, who recently appeared in “Extreme Job” (2018), handles his expositive scenes well while also showing some sense of humor. As Park Jung-Min, who drew my attention with his substantial supporting role in “Bleak Night” (2010), brings considerable intensity to his character, Lee Jae-In, who impressed me a lot with her excellent comic performance in “Adulthood” (2017), is compelling in her rather tricky part, and she surely confirms to us again that she is indeed a talented young actress to watch.

On the whole, “Svaha: The Sixth Finger”, whose title comes from a Sanskrit lexical term used in Hinduism and Buddhism as a denouement at the end of a mantra, is a competent genre piece distinguishing itself well with its own distinctive local elements. Although it did not scare me that much, it still amused and entertained me nonetheless, and I think it is one of better South Korean horror films during recent years. 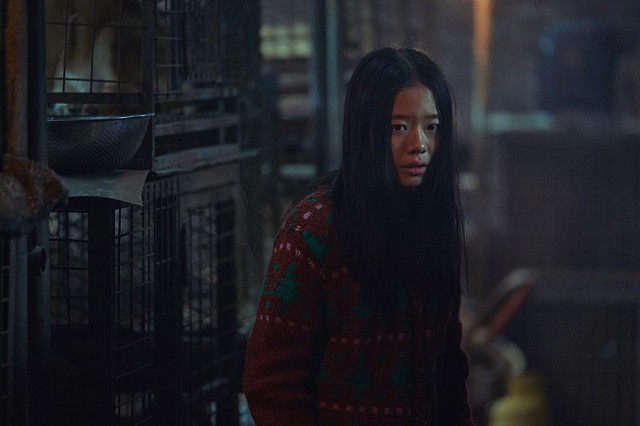