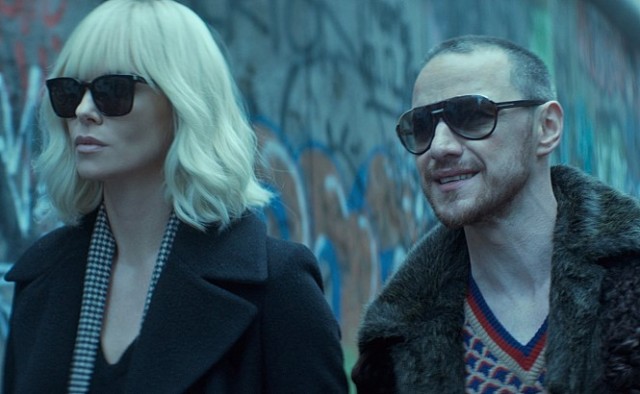 “Atomic Blonde” is a gritty but stylish action film impressing us a lot with its colorful personality and bruised beauty. As the movie confidently moves from one narrative point to another along with its feisty, resourceful spy heroine, we are served with a number of intense physical action sequences to admire, and the movie also dazzles us with several striking visual elements presented on the screen. Although it becomes a little too murky and plodding during its second half, the movie is firmly held together by the strong presence of its talented lead actress, and I came out of the screening room with enough satisfaction even while a bit confused about the story and characters in the movie.

The main background of the movie is Berlin in late 1989. The Cold War era is approaching to its closing chapter as East Germany is about to be collapsed, but the era is not over yet for many figures in that gray world of espionage including Lorraine Broughton (Charlize Theron), a top-level MI6 field agent who is sent to Berlin for a very urgent mission. An MI6 field agent who once closely worked with her was killed in Berlin a few days ago, and Broughton must retrieve a certain microfilm which was in his possession before he died. That microfilm in question contains the list of every double agent around the world, and her superiors in MI6 want to get that film for not only for their field agents’ safety but also for exposing a mysterious double agent who has given many crucial pieces of information to the other side.

Broughton tries to be undetected as much as she can, but she inevitably goes into Jason Bourne mode as soon as she arrives in West Berlin, and we accordingly get the first major action sequence in the movie. Once it starts with a sudden physical movement, the sequence becomes more fierce and brutal as unfolded inside a vehicle being driven along the road, and it eventually culminates to an expected big moment.

As Broughton goes deeper into her mission, we meet several distinctive characters coming into her increasingly dangerous situation. David Percival (James McAvoy), the Berlin station chief of MI6, looks more like a street hoodlum on the surface, but this eccentric guy has so far done his jobs well for his agency, and he surely knows how to go back and forth between East and West Berlin. While he can be helpful, Percival is not exactly trustworthy, and Broughton becomes suspicious of him especially after she happens to face an unexpected trouble at one point. Channeling that manic intensity shown from his previous performance in “Split” (2016), McAvoy is clearly having lots of fun with his character, and his rambunctious performance effectively complements his co-star’s steely appearance during their scenes.

In case of a KGB guy named Aleksander Bremovych (Roland Møller), this dude is determined to get that microfilm by any means necessary. During one particular scene, Bremovych demonstrates how ruthless he can be to a group of unfortunate East German lads, and Møller, who was excellent in Oscar-nominated Danish film “Land of Mine” (2015), brings considerable intensity and menace to his role.

And there is Delphine Lasalle (Sofia Boutella from “The Mummy” (2017)), a young French field agent who also seems to be waiting for any chance to obtain that microfilm but then looks like being attracted to Broughton. Both of them are certainly well aware of each other’s possible intentions, but that does not prevent them from having a sexual relationship with each other, and Theron and Boutella have a nice chemistry between them as their characters let themselves carried away by their mutual attraction for a while.

Based on the graphic novel “The Coldest City” by Antony Johnston and Sam Hart, the adapted screenplay by Kurt Johnstad sometimes loses its narrative pacing as its plot becomes more convoluted, but the movie keeps maintaining its momentum as constantly pouring style and substance into the screen. Director David Leitch and his cinematographer Jonathan Sela soak many scenes in colorful noirish lighting, and composer Tyler Bate’s aggressive electronic score further accentuates this striking visual impression. While there are a number of nice period details including a certain famous video game, the movie utilizes well several popular pop songs, and I was delighted by when David Bowie’s song from “Cat People” (1982) fabulously sets the tone in the beginning of the film.

Besides the aforementioned action sequence, the movie has other first-rate action sequences to strike and then excite us. Leitch, who was the producer and unofficial co-director of “John Wick” (2014), surely knows how to convey to us the vivid impact of physical actions, and he and his crew did a terrific job especially in case of a dynamic long-take action sequence unfolded inside a building. As becoming more involved in this sequence, we can really sense that the characters fight or struggle hard on the screen, and Charlize Theron and other performers surely earn their bruises as making their physical actions look as real and visceral as possible.

For Theron, this is another wonderful opportunity to play a strong action movie heroine after “Mad Max: Fury Road” (2015), and she delivers a sexy, compelling performance which will instantly erase her forgettable villain performance in “The Fate of the Furious” (2017). Besides McAvoy, Møller, and Boutella, the other notable performers in the film including John Goodman, Toby Jones, Eddie Marsan, Barbara Sukowa, and Til Schweiger dutifully fill their respective small supporting roles, and Goodman and Jones remind me again of how these two reliable character performers have always brought interesting things to their roles.

“Atomic Blonde” is a genre exercise which does not transcend its genre conventions, but it knows exactly what it wants to do, and it does its job as well as intended. Although I still think the movie could be improved by tighter storytelling, I enjoyed its mood and performance while excited by its action sequences, and I can assure you that this is another wonderful action film of this year. 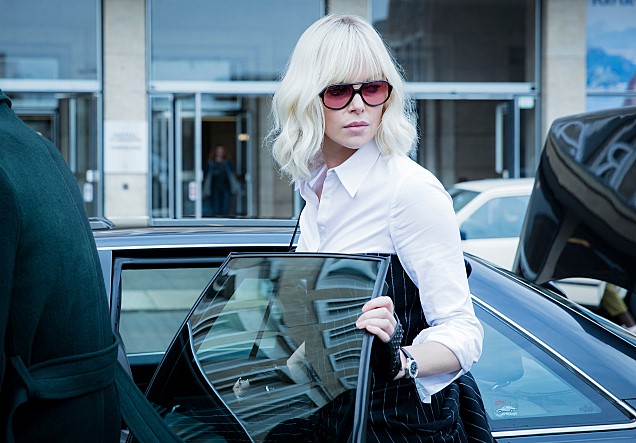 This entry was posted in Movies and tagged action, Cold War, Espionage. Bookmark the permalink.