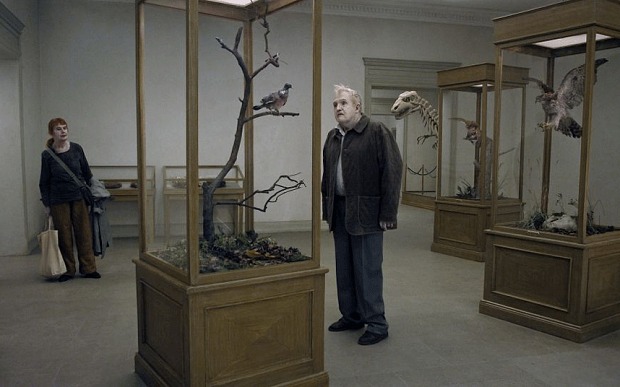 Swedish film “A Pigeon Sat on a Branch Reflecting on Existence” is as weird, absurd, and hilarious as you can expect from the final chapter of Roy Andersson’s human trilogy. Again, we get a free-flowing series of vignettes featuring unhappy urban people who mostly look sad, lonely, sullen, morose, destitute, depressed, and cadaverous as being insulated in their self-absorbed melancholy and drab environment, and their deadpan moments are accompanied with a morbid sense of black humor which sheds some unforgiving lights on our human nature. We laugh with growing amusement, but then we are reminded of how we are sometimes no less uncaring and self-absorbed than these silly, pathetic people on display.

According to Andersson himself, the title of the film was inspired by those small birds sitting on branches in Pieter Bruegel’s 1565 painting “The Hunters in the Snow”, and the first scene seems to reflect that as a guy is blankly looking at a number of stuffed birds in exhibition. In another scene around the middle of the film, a girl mentions the title of the film in front of others during her school festival, but what she says does not draw much attention as other kids interrupt her time on the stage.

There are total 39 vignettes in the movie, and they are loosely strung together under the common mood and themes shared among them. Around the beginning, we get a trio of comic moments specifically about meeting with death. A husband suddenly dies in the dining room of his apartment, but his wife remains oblivious to that while working in her kitchen. Three children of an old lady come to see their mother at the hospital, and then they fight literally over her dying body due to what she does not want to let go even at her deathbed. A guy has just collapsed and died on a ferry ship, but others around him are more interested in what they should do with something he purchased right before his unfortunate departure. 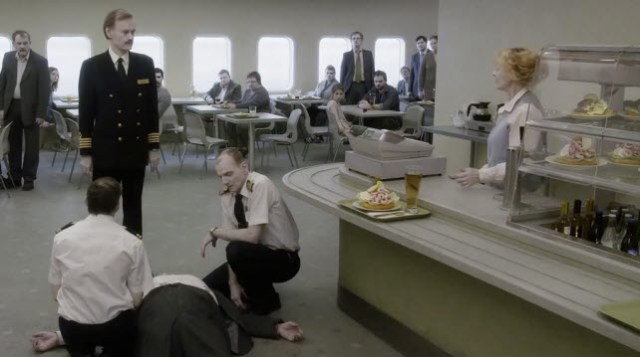 The characters in the film often say “I’m happy to hear that you’re doing fine.” during their phone conversations. That gradually becomes an ironic running gag throughout the film as we observe that 1) they are not happy at all and 2) they do not care much about whether others on the other end of the line are really doing well or not, let alone what is going on around them. While bothered by the clapping sounds from a Flamenco dance lesson in the building, a cleaning lady keeps doing her work on the floor, as flatly engaging in her phone conversation. Whoever he is talking with on the phone, an old man remains isolated in his posh office – and he is not apparently all right considering what he is holding in his hand.

Two characters become more prominent as the recurring ones in the film. They are Jonathan (Holger Andersson) and Sam (Nisse Vestblom), and these middle-aged salesmen slouch around the nadir of their shabby business of selling trivial toys for practical joke. They are pretty lousy in dealing with their customers, and they do not get along with each other well either, though they live near each other in the same apartment building. Getting no fun or consolation from each other, they are tired of each other, but then they only find themselves being reminded of how they are destined to be stuck with each other while going nowhere in their miserable daily life. Compared to their seemingly endless predicaments, waiting for Godot looks more cheerful and productive in comparison.

Nevertheless, some of their scenes are very hilarious to say the least. In one scene, one of their complaining customers visits their apartment, and that leads to an absurd moment when this extremely shy and nervous guy talks only through his wife. In case of a long scene unfolded at a local bar, I can only tell you that you will be amazed and amused by how things get weirder step by step after a sudden change breaks into the scene. 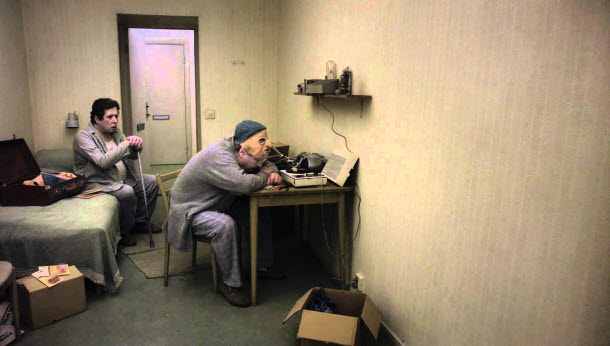 Like Andersson’s two previous films “Songs from the Second Floor” (2000) and “You, the Living” (2007), which are the other two chapters of his trilogy, “A Pigeon Sat on a Branch Reflecting on Existence” is both meticulous and effortless in its handling of moods and details. While the camera usually maintains its static positions, Andersson’s thoughtful scene compositions always attract our attention as we notice something odd and funny on the screen. As an aging captain is having a phone conversation outside a restaurant, we slowly come to spot two particular characters in the restaurant. While the camera focuses on a barber talking directly to the camera and us, we also observe that barber’s only customer sitting near him.

One of the most memorable scenes in the film, which features a huge copper chamber prepared for an unspeakable purpose, is simply spellbinding in its utterly surreal presentation of how far human beings can go in their ignorance and disregard of others’ pain and misery. The camera calmly stares at this disturbing sight for a while, and then the movie cuts to a shot showing what is going on at the opposite. Regardless of what exactly this scene symbolizes or reflects, it will leave a striking impression on you in the end.

While he made a successful debut with his first feature film “A Swedish Love Story” (1970), Roy Andersson focused more on making commercials after the critical/commercial failure of his second film “Giliap” (1975), and it took 25 years for him to come back with “Songs from the Second Floor”, which received the Jury Prize at the Cannes Film Festival in 2000. When I saw “You, the Living” for the first time in 2009, I loved its many quirky moments, and I had a great moment when I watched it again later at the 2010 Eberfest. The audiences around me constantly laughed with joy and amusement during the screening, and then we got an enthusiastic Q&A session accompanied with late Roger Ebert, who would be excited by “A Pigeon Sat on a Branch Reflecting on Existence” if he were alive now.

Besides being shown at the 2015 Ebertfest, the movie received the Golden Lion Award at the Venice Film Festival in last year, and it was recently chosen as Sweden’s submission to the Best Foreign Language Film category of the 2016 Academy Awards. Its dark laughs mercilessly penetrate into human nature, but those laughs come with human empathy and insights, and the last scene of the film somehow feels optimistic under its melancholic surface. We are basically alone in each own individual state of mind, but we are not alone at least in that aspect – and life goes on anyway as we are bumping with each other. 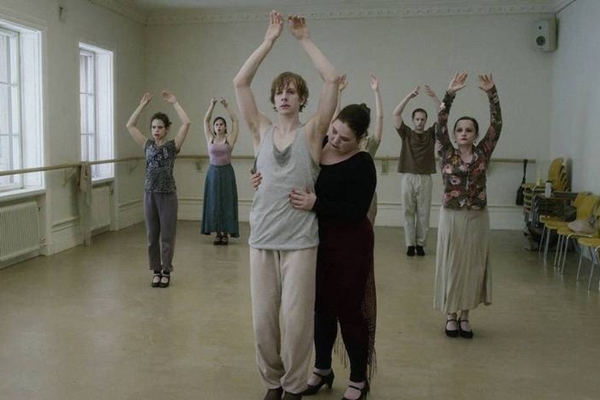 This entry was posted in Movies and tagged Absurdity, Comedy. Bookmark the permalink.