As a seasoned moviegoer, I usually ignore “Inspired by a true story/true stories” at the beginning of movies supposedly based on real-life incidents, and I am always ready to enjoy any fictional elements in them, but “The Water Diviners” demanded too much of the suspension of disbelief from me as a fiction. There is an interesting drama worthwhile to tell within its first two solid acts, but then, sadly, it digresses into a bunch of contrivances during its third act, and that is where I began to lose my interest with more disbelief to be piled.

Its story mainly revolves around Joshua Connor (Russell Crowe), an Australian farmer who lost all of his three young sons after encouraging them to enroll in the Army during the World War I. They all died along with thousands of other British, Australian, and New Zealander soldiers during the Battle of Gallipoli in Turkey (it was one of the most devastating defeats for the British Army and its allies during the war), and his wife Eliza (Jacqueline McKenzie) has not yet been recovered from their loss while he keeps doing his farm works including finding a right spot for digging his new well.

After Eliza kills herself on one day, Connor, who becomes more morose than before, decides to take a long journey to Turkey for recovering their sons’ bodies which are probably buried somewhere in Gallipoli with other fallen soldiers. When he arrives in Istanbul after several weeks, he comes across a local boy named Orhan (Dylan Georgiades), and this plucky boy leads Connor to a hotel managed by his mother Ayshe (Olga Kurylenko), a war widow who does not welcome Connor for an understandable reason but accepts him as a guest because of her boss/brother-in-law (he is considering taking her as his second wife, by the way).

Connor wants to go to Gallipoli for himself, but he comes into a situation which is not exactly ideal for his search. While the war is over, Turkey is going through a very uneasy period with the beginning of the national movement, and there is even a growing conflict between Turkey and Greece. Because the British Army is currently doing a massive evacuation in Gallipoli with the cooperation of the Turkish Army for making the proper graveyard for the fallen, Connor is not allowed to go there, but he is still determined to take care of his personal matter for himself, and he soon finds a way to go to Gallipoli. 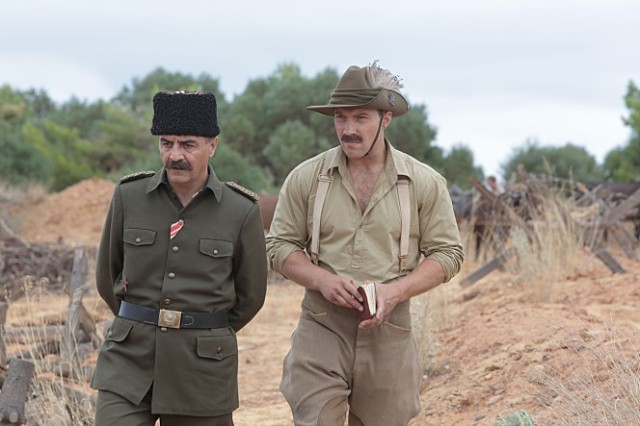 He is certainly not welcomed right from when he arrives in Gallipoli, but Lieutenant Colonel Cyril Hughes (Jai Courtney) is a sensible man who sees no point in blocking or holding Connor. He and his soldiers and Turkish workers are already busy with excavating countless remains of their soldiers as well as Turkish soldiers, and their wide area looks more like a big burial site with those heaps of bones dug out from the ground.

And we meet Major Hasan (Yilmaz Erdogan from “Once Upon a Time in Anatolia” (2011)) and his deputy Cemal (Cem Yilmaz, who is one of the better elements in the film along with his co-star Erdogan), two Turkish soldiers who return to their old battleground for assisting Hughes and his soldiers. Although there is still some visible tension between these two guys and Hughes’ men, Hasan is a practical man willing to help Hughes, and he also wants to help Connor after he learns about Connor’s motive.

While the Battle of Gallipoli is mostly remained as the past hovering over the characters in the movie, we get the glimpses of its horror during the scene in which Hasan recollects his dark memories of the battle as looking around an excavation site with Hughes. This scene is intercut with flashback shots to generate a striking contrast between past and present, and then there is a harrowing moment which shows us what probably happened to Connor’s sons during that hellish battle.

And that is the point where the movie starts to become tricky. That scene of Connor’s sons looks like as if what it depicts had really happened like what is remembered by Hasan and Cemal, and there are also several other things which cannot be possibly imagined or remembered in Connor’s mind or others’. Maybe I can believe that Coonor is capable of finding where his boys were buried just like he could intuitively detect a water vein below his farmland, but I cannot believe how he becomes so sure about an unlikely hope later in the story.

To make the matters worse, the screenplay by Andrew Anastasios and Andrew Knight has more plot contrivances to follow during its third act. I cannot describe this part in details for the reasons you may understand, but I can tell you that the movie awkwardly shifts its gear into a louder mode with some actions and then resolves its story too quickly during its unconvincing finale.

This is the first feature film directed by Russell Crowe (he previously co-directed documentary film “Texas” (2002)). While the result is a good-looking period drama hampered by its weak story and characterization, it is not boring to watch at least mainly thanks to his technical crew including the cinematographer Andrew Lesnie, who provides several nice location shots along the story. The movie was shot in the locations in Australia and Turkey, but I must confess that I had an odd feeling during a number of certain scenes in Turkey and then could not help but wonder whether they were shot in Australia instead.

Like Angelina Jolie’s “Unbroken” (2014), another film which drew attention as a major work directed by a major Hollywood star, “The Water Diviner” is a well-made flawed work which was made with sincerity but is not strong enough to engage me on the emotional level despite its good technical aspects. Regardless of whether its story is entirely true or fictional, all I want from a movie is a good, truthful story I can believe at least during its running time, and “The Water Diviner” fails to find an emotional vein below my seasoned skin.

This entry was posted in Movies and tagged Family, Father and son, War. Bookmark the permalink.