In my humble opinion, style and substance are necessary for making a good SF film. For drawing our curiosity, SF film needs some style to create its own mood and reality, and that will make us believe that something fantastic can happen in its story. For stimulating our interest, it also needs some substance to support its own ideas, and that will intrigue and entertain us while inducing other interesting thoughts from us.

As a small SF film, “The Signal” has style and substance, but it does not have enough substance to be a recommendable one. I do not mind that its premise is not so fresh, but, after the nice set-up process in the beginning, the movie moves its story in a very familiar and predictable way, and what will be revealed in the end can be easily guessed within its first 20 minutes if you are a seasoned movie audience. I felt dissatisfied to see that there were not many things to talk about besides that, and I eventually could not help but think of other several other SF films which handle similar premises better than this one.

Anyway, the movie starts with promising potential while establishing its characters and their initial circumstance. Because his girlfriend Haley(Olivia Cooke) is going to move from MIT to Caltech, Nick(Brenton Thwaites, who previously appeared in “Oculus”(2013) and “Maleficent”(2014) early in this year and will be soon shown to us again through the upcoming film “The Giver”) is taking her to California by his car along with his close friend Johah(Beau Knapp), and they are mostly in good mood although there is a growing doubt between Nick and Haley. As shown through flashbacks, Nick was a marathon runner before he got a permanent injury on his legs, and, as they become distant to each other after his injury, Haley naturally begins to wonder whether this road trip is his act of saying goodbye to her. 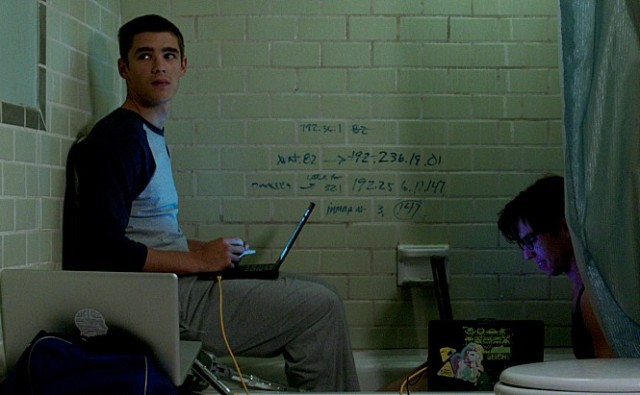 Meanwhile, an interesting thing draws Nick and Jonah’s attention during one evening. They once encountered a hacker named NOMAD, and this mysterious guy impressed them a lot through successfully breaking into the computer network system of MIT, while almost getting Nick and Johah expelled as a consequence at that time. When NOMAD contacts them again, Nick and Jonah succeeds in tracking down NOMAD’s real IP address, and their curiosity is increased further when they discover that NOMAD resides in some area of Nevada which happens to be near their road trip route.

Although Haley is not so pleased about their changed plan, Nick and Jonah want to know the identity of NOMAD, so they and Haley go to that remote area in question during the next evening. They only find nothing but a barren house on the spot, and the house clearly looks suspicious for good reasons, but Nick and Jonah make an unwise choice of going into the house instead of leaving the area as soon as possible(I guess they have not watched those horror movies about young guys getting into serious trouble).

It is not much of a spoiler to tell you that something happens while Nick and Jonah look around the house, and then Nick wakes up to find himself being confined in an unknown place which looks like some top secret government facility. Everyone wears white hazmat suit in this place just because Nick is assumed to be infected through whatever happened during that baffling moment he cannot remember well, and he is frequently tested and interviewed by Damon(Laurence Fishburne), who seems to be in charge of everything in the building. 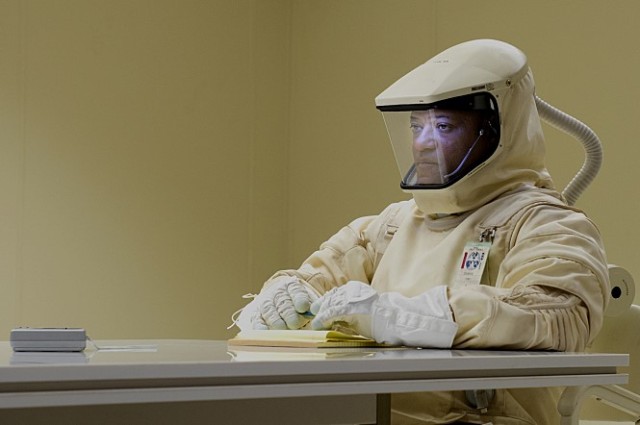 The director William Eubank, who co-wrote the screenplay with Carlyle Eubank and David Frigerio, maintains well the claustrophobic feeling of paranoia on the screen as suggesting something insidious going on beyond Nick’s limited view. Damon does not tell a lot about what is exactly happening, so Nick naturally becomes more furious and frustrated as the time goes by, and he also realizes that there are many other things he should not trust besides Damon and other facility guys.

Along with the white sterile atmosphere surrounding him, Fishburne’s unflappably patient and authoritative attitude throws a certain chilling quality into the movie. Whatever cards his character is holding behind his back(or inside his hazmat suit, shall we say), Fishburne’s calm, detached performance always conveys us the sense of authority during his scenes and we begin to sense that he is the guy who always has the situation under control – no matter what happens.

Unfortunately, the movie becomes less interesting as going through its obligatory third act, and it was particularly disappointing for me to watch the movie taking a less intelligent route just for accelerating itself toward the expected ending. I do not mind about action as a part of story, but the action scenes in the movie just feel like being an artificial attempt to finish the story with bangs, and the movie leaves a little too many unexplained things around its ending.

Although “The Signal” was made only with a low budget of 2 million dollar, I can assure you that its budget was spent far more efficiently than the mega-budget for “Transformers: Age of Extinction”(2014), and the result clearly shows that William Eubank, who previously made a debut with “Love”(2011), is a good director with skills and potential. The movie is passable, but it is a commendable work to some degrees, and I guess we can accept it as a good signal for better things to come from its director in the future.

This entry was posted in Movies and tagged College Students, Horror, SF. Bookmark the permalink.