Just in case I sound a bit too cynical to you, I assure you that “Song for Marion” mostly works because it handles its song well despite its familiarity. The ending is already set for its hero right from its first scene and how he arrives at the ending is pretty predictable, but the earnest performances by two reliable actors make the story work, and you can forgive its contrivances and clichés for a while as enjoying its song.

The life of Arthur Harris(Terence Stamp) could have been very lonely if it had not been for his loving wife Marion(Vanessa Redgrave). He is not mean, but this grumpy old man is not particularly friendly with others including his own son James(Christopher Eccleston). His wife has always been the light of his life since their marriage, and his reticent face is brightened a bit whenever he is with her. I’d love to know how they met and then came to love each other during their young days – and how they have managed to maintain their relationship in their cozy household.

Marion has been ill recently, but this lively old lady is cheerful while her husband is very concerned about her health. Although she needs wheelchair to move around outside, she gamely participate in a singing lesson for aging people at the local community center, and she is liked by everyone in the singing lesson including their teacher Elizabeth(Gemma Arterton). While she is joyfully taking the lesson with others, Arthur just waits for her outside the building because he does not have much interest in singing – and getting along with others.

And then Marion’s illness gets worse than before. Arthur becomes more morose because his beloved wife will soon die, but Marion loses none of her feisty spirit. She keeps attending the singing lesson even though her body becomes weaker, and she even manages to sing “True Colours” wonderfully during the audition for the upcoming choir competition. As we look at his face during her performance, it is apparent that her singing touches Arthur deeply, although he watches her performance silently from the distance and does not say much about it to her.

I guess it will not be much of a spoiler to tell you that Marion eventually passes away during one night. While devastated by the sense of loss, Arthur gradually finds a way to cope with his grief. It turns out that he is a good singer, if not a terrific one, and he prepares for the choir competition along with Elizabeth and his fellow aging students. They look old, but they are still young at their hearts, and there is a small funny moment when one of the members is sent to the hospital after he tries a little too hard while practicing a dance move not recommendable to aging people

The movie becomes more predictable than before as it approaches to the finale which is of course unfolded at the choir competition in question, and it becomes less engaging as it is saddled with a bunch of clichés coming from here and there. No matter how much problematic their circumstance is, you surely know they will be on the stage. No matter how much estranged James is from his father, it goes without saying that he will come to the competition to see his dad. No matter how much reluctant Arthur is on the stage, he is destined to give a moving solo performance for the memory of his wife because he cannot possibly let her down.

Nevertheless, the movie handles its conventions fairly well with sincerity during most of its running time, and its two lead performers compensate for its shortcomings to some degrees. Terence Stamp and Vanessa Redgrave are well cast as an aging couple who have known and understood each other for many years, and these old veteran performers bring lots of believability to the story. Arthur and Marion sometimes conflict or bicker with each other for trivial things in their daily life, but they always come to agreement, and the affection between them remains same as ever.

While appreciating the quiet chemistry between Stamp and Redgrave on the screen, I could not help but become a little sentimental about their respective careers which started more than 45 years ago. Stamp may look softer and more wrinkled than before, but his sullen face took me back to when I was chilled by his creepy performance in “The Collector”(1965) or when I enjoyed his villainous performance in “Superman”(1978) and “Superman II”(1980). Redgrave is still a graceful actress to watch even though she is over 75 at present, and you can instantly imagine how livelier her character was in the past as you watch her wise face.

“Song for Marion” is a standard sentimental tearjerker, but it is a song sung well to move its audiences none the less, and I saw the audiences reacting positively to its tear-jerking moments. I may be a bit grumpy about the movie as a seasoned moviegoer, but I was engaged thanks to the nice twilight performances by two respectable actors I have been familiar with through many movies, and I think that is a reason good enough for recommendation. 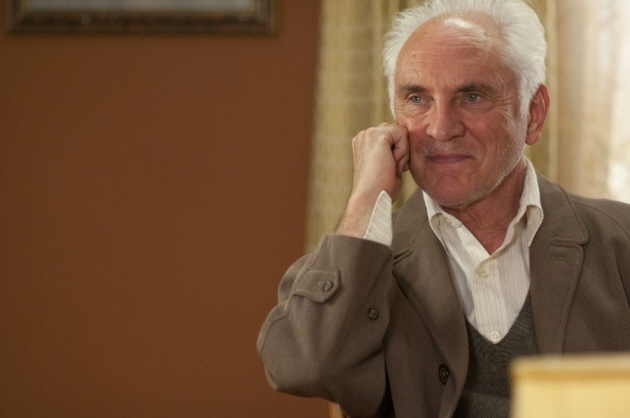 This entry was posted in Movies and tagged Choir, Drama, Husband and Wife, Terminal Illness. Bookmark the permalink.