To be frank with you, I had no particular expectation on “Jack the Giant Slayer”, the latest offering from the recent trend of ‘re-interpreting’ fairy tales/folklores into Hollywood blockbuster films. The results from this trend have been unsatisfying like “Mirror Mirror”(2012) and “Snow White and the Huntsman”(2012), or dreadful like “Hansel & Gretel: Witch Hunters”(2013), or modestly good like “Alice in Wonderland”(2010), and, as far as I remember, most of them were not particularly memorable.

A good news is that “Jack the Giant Slayer” will not waste your money if you just expect a simple fun peppered with some amusement. Although this fantasy movie eventually switches its gear toward your average CGI action spectacle mode filled with lots of noises and bangs for its climactic finale, there is enough sense of fun and wonder in the movie for overlooking its weak points for a while, and the movie is more enjoyable than I expected in spite of my reservation generated after the end credits.

As many of you know, the story is inspired by two fairy tales “Jack and the Beanstalk” and “Jack the Giant Killer”. Between the earth and the sky, there is a hidden place where the giants live, and these big creatures are not very nice dudes. As shown in the prologue sequence told in a bedtime storytelling fashion, they once terrorized the land of the humans not only with their brutality and but also with their insatiable taste for human flesh, but they eventually retreated to their world after the humans found a way to have them under control. 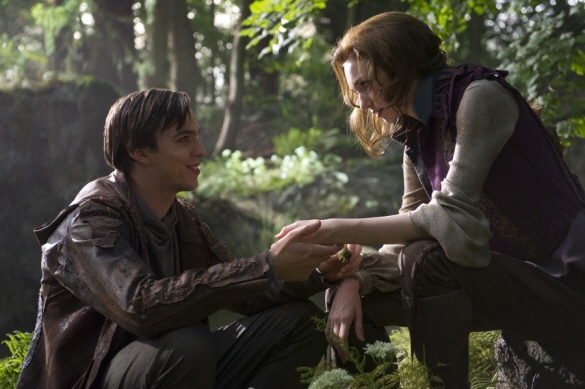 Our young peasant hero Jack(Nicholas Hoult) was a big fan of this legend when he was young and his dear widower dad was alive to tell the story to his son every night. Now Jack lives alone with his grumpy uncle in their shabby house, and, because of their recent hard economic situation, they have to sell their horse, and it is Jack’s job to take the horse to the city and sell it at a reasonable price.

Of course, Jack coincidentally encounters a monk with those magical beans in the city. He exchanges the horse with the beans just because he is promised that he will be paid by the monk’s colleagues for delivering these valuable beans to them, and Jack’s uncle is naturally not so pleased about this deal. Although the monk warns Jack of the beans’ dark power, one of the beans is inadvertently sprouted by water below Jack’s house, and it rapidly grows into a huge green beanstalk towering over the plain like the Burj Khalifa building in Dubai.

Unfortunately, the princess Isabelle(Eleanor Tomlinson), who escapes from her suffocating environment alone for having her own adventure, happens to drop by Jack’s house at that moment, so she is swept along with the house by the rapid growth of beanstalk. Jack does not like high place much, but, for bringing her back to the earth, he joins the rescue team which includes a valiant knight named Elmont(Ewan McGregor) and an obnoxious prick named Roderick(Stanley Tucci), who is going to marry Isabelle and also has a secret plan for satisfying his big ambition.

After several hours of climbing, they arrive at the place where they have only heard about through the legend, and they soon meet the giants, who have been waiting for the chance to begin another reign of savage terror. Even though we can clearly see that they are CGIs, the movie depicts these cannibalistic creatures with amusingly gross and grotesque details which make Charles Bronson looking like a Prince Charming compared to them, and there is a funny moment involving their dirty kitchen where McGregor’s character is rolled into a dough crust and then put into an oven along with live pigs. I am sure the cook will never get an approval from any public health inspectors, although he will probably eat them first.

Their lifestyle is unpleasant to say the least, but their habitat looks pretty nice with forests and rocks and waterfalls. While observing these landscapes, my logical mind became curious about how this magical place is possible. I know it is certainly maintained by magic or some supernatural force, but where the hell does the water come from? And, considering that the place is pretty high above the sky, shouldn’t this place be cold?

I know I should not be that serious about a fairy tale and its fantastical premise, but my mind kept finding interesting questions, and I kept wondering about how these big dudes have been living in their world for many years. Because I did not see any female or infant giants in the movie, I wondered at point whether they reproduce asexually like Saccharomyces cerevisiae, a.k,a. budding yeast – is General Fallon(played by Bill Nighy), the leader of the giants who has two heads, an example of botched asexual reproduction? 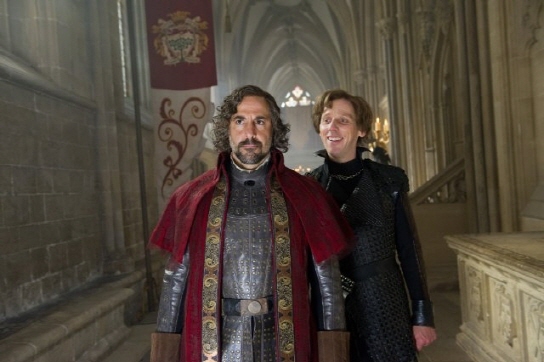 Anyway, the movie delivers its loud action spectacles as promised in its trailer during its third act, and the director Bryan Singer, the director of the first two X-men movies, handles the big CGI action sequences with sufficient thrill and excitement although the story drags at some points. Nicholas Hoult and Eleanor Tomlinson play the least interesting characters in the story, but they are adequate background for their co-actors who are more fun to watch, and they all look convincing amidst the special effects on the screen. While Ewan McGregor maintains the sense of fun even when his character is very serious as he should be, Stanley Tucci is entertainingly arrogant and despicable as an opportunistic villain whose big ego will not be satisfied with only one kingdom. Ian McShane has small humorous moments as Isabelle’s concerning father, and Bill Nighy is also good behind his CGI character(my private observation on his two-headed character: “Masturbation is certainly not a lonely business for him.”).

“Jack the Giant Killer” is an average fantasy blockbuster film you will probably enjoy a little more than I did. Although the movie is rated PG-13 in US, the movie has some frightening moments to stimulate the young audiences’ imagination, but it is a mostly bloodless entertainment you can watch with your family. It does not feel fresh enough to be recommended, but I appreciate that the movie did answer one of my personal questions with a good lesson; like tobacco, magical beans are harmful for your health, folks.