In 2000, I read J.R.R. Tolkein’s “The Lord of the Rings” for the first time after hearing the news about Peter Jackson’s ambitious plan for making that epic trilogy into three films. Although the translated version I read was not very good(they divided the whole story into five books, and I mistook Meriadoc Brandybuck for a girl), I had a nice time with Tolkein’s bountiful fantasy world, and I became curious about his previous work “The Hobbit” as soon as I finished reading “The Lord of the Rings”.

Like I did in that year, Peter Jackson went back to the origin of his massive technical achievement which got him 3 Oscars, and “The Hobbit: An Unexpected Journey” delivers as much as it promised, but it has several crucial problems. While it is nice to see the Middle Earth again on the big screen, this beautiful fantasy world in this film does not reach to the level of wonder and enchantment experienced in Jackson’s trilogy films, and what we get here is one of the expensive standard products which have kept coming out since the breakout success of Jackson’s trilogy films and the Harry Potter series.

In addition, as many of you heard, Jackson bloated Tolkien’s small book, which is far shorter than its sequel, into a fantasy action story on an epic scale, and he even divided the book into three films. I think the whole plot of “The Hobbit: An Unexpected Journey” can be succinctly reduced to at least 40 minutes, but the movie already consumes around 40 minutes at Bilbo Baggins’ house even before his unexpected journey actually starts, and that is just the first taste of this overstuffed production. While lots of things happen during the next two hours, the characters are still at the beginning of their journey when the end credit rolls(this is not a spoiler at all), and we know that there will be another two films probably longer than 160 minutes. As far as I remember, reading “The Hobbit” did not take so long like that.

After the long prologue sequence which introduces us two familiar characters along with the background story which can be told within few minutes rather than presented through big CGI action scenes, we meet young hobbit Bilbo Baggins(Martin Freeman) enjoying another uneventful day at his home Bag End in Hobbiton, a pastoral town which looks as greenish as it appeared in front of us for the first time in 2001. Bilbo wants to continue his leisurely lifestyle as long as he can live, but his quiet time in the afternoon is interrupted by a sudden visit of the great wizard Gandalf(Ian McKellen), and, thanks to Gandalf’s subtle and wily manipulation, he soon finds himself serving a bunch of dwarfs led by Thorin Oakenshield(Richard Armitage) as their host in the evening. On the next day, Bilbo eventually comes to join the dwarfs’ quest as their 14th member, and he and others go through many perilous moments involving trolls, orcs, goblins, rock giants, and, of course, Gollum(Andy Serkis).

The purpose of the dwarfs’ quest is killing a vicious dragon named Smaug and recapturing the Lonely Mountain, which is also called Erebor, along with the heaps of treasure inside that place. After losing their place to Smaug, the dwarfs have been wandering around for many years, and now Thorin decides it is time to regain the glory of their lost kingdom. He is accompanied with his loyal twelve dwarfs, and I must say I admire Gandalf’s sharp skill to check every dwarf at once without any confusion. They do not look entirely indistinguishable from each other, but can you tell me who is Bifur and who is Bofur?

As Bilbo and Gandalf and the dwarfs plod along their way, the movie throws lots and lots of stuffs into the screen, and it is excessive at times. The screenplay by Peter Jackson, Guillermo del Toro, and Jackson’s usual collaborators Fran Walsh and Philippa Boyens is not an awful adaptation, but it is problematic because everything in the book is expanded or bloated in the film. That aspect frequently hurts the pace of the story as the movie keeps loitering on its way with several supporting characters including another wizard Radagast(Sylvester McCoy) and their side stories which could have been handled more briefly. The action scenes are handled well in most cases, but they feel like the echoes from the excitements we had long time ago, and there is the constant feeling of déjà vu as we watch the characters are hurled into the actions in the movie.

And there is a serious problem with its high frame rate 3D. Photographed at 48 frames per second, the movie looks indeed clear and distinct, but, ironically, the hfr 3D version looks pretty awkward on the screen due to its high quality, and I thought about how awkward it was to watch one of my DVDs when I accidentally set my PowerDVD blu-ray player program in the forced high definition mode. The movements of the characters feel a little too rapid and strange many times, and the special effects and set designs surrounding characters feel more unreal. I was not looking at a believable fantasy world; I was looking at the studio sets decorated with special effects.

But I must point out that the movie was not an unpleasant experience at least, if a distracting one. Even though the movie is unnecessarily long, I think I will be able to enjoy the movie a little more if I watch its plain 2D version. I was entertained a bit by a thrilling action sequence with rocky giants, and I appreciated few humorous moments in the movie such a funny scene with three stooge trolls, and I was sort of glad to see several familiar places and familiar faces. Ian McKellen is fun to watch, and Martin Freeman is a little likable hero who rises to the occasion in the end, and it is nice to watch Cate Blanchett, Hugo Weaving, Ian Holm, Elijah Wood, and Christopher Lee reprising their respective roles from Jackson’s trilogy films. The special mention must go to Andy Serkis, who steals the show again through reprising his under-appreciated motion capture performance as Gollum, a loathsome but pitiful creature who gets the best moment of the movie during Bilbo’s fateful encounter with Gollum and his “precious” in his dark, lonely, and miserable subterranean lair.

“The Hobbit: An Unexpected Journey” is not a terrible movie at all, and it has some good things to be appreciated, but I do not think such a long movie is necessary for telling a small part of the story which is already small enough to be handled in one 3-hour movie. The Lord of the Rings trilogy is a serious epic story which is able to accomodate more than 9 hours, but “The Hobbit” is a lightweight adventure story with no burden, and the strains due to its ponderous adaptation process are apparently shown in this first installment of the planned trilogy. I believe Jackson and his actors and crews will maintain the technical quality in the next two films to come, but, boy, it’s a long, long start for a far longer journey. 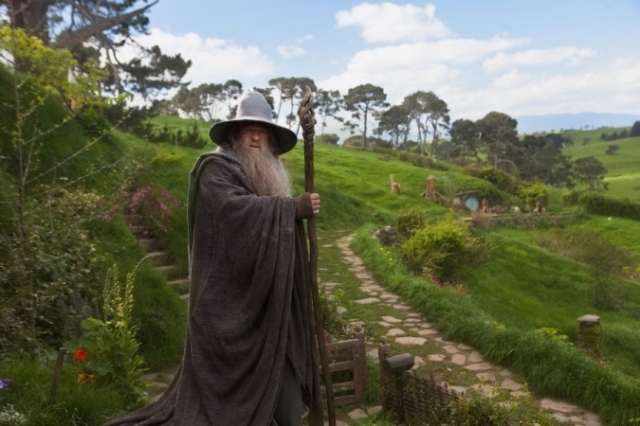 This entry was posted in Movies and tagged Fantasy, Journey. Bookmark the permalink.