“In a Better World” presents us a question which cannot be easily answered in our imperfect world: how should we response to the violence and accompanying injustices? Yes, we usually say we can solve the problems with the communication and empathy between us, but, sometimes, there are the situations where non-violence does not seem to be an effective response. It goes without saying that the violence is bad, but some characters in the film are drawn to another option in such situations like that.

In case of a young boy named Elias(Markus Lygaard), he is tormented by a mean bully at his school every day. His mother, Marianne(Trine Dyrholm), knows well about that, but she cannot find the solution for her son even when she and her Swedish husband Anton(Mikael Pernsbrandt) have a meeting with school teachers. She is frustrated about the lack of communication between her and his son on this problem. Anton is not much help to his son, either, though he is a good dad to Elias and Elias’ younger brother.

Marianne and Anton are living separately from each other due to some recent painful incident in the past. Anton periodically visits their town in Denmark briefly for spending time with his sons, for he works at a Sudanese refugee camp in Africa as a doctor. In the tough world far different from a comfortable Danish town, he has to deal with the gruesome violence frequently done to innocent pregnant women, which makes a striking contrast with the background beautifully shot by the cinematographer Morten Søborg.

Meanwhile, when he is cornered again by the same bully in the bathroom, Elias is saved by Christian(William Jøhnk Nielsen), who recently moves to the town from England. Christian mercilessly attacks the bully with a blunt instrument, and then threatens him, collapsed on the floor, with his knife. The bond is quickly formed between Elias and Christian. Elias lies to cops and teachers about what happened, and he helps Christian hide the knife. He is happy to have a friend. Plus, after the formal reconciliation in front of the school principal, the bully never torments him again.

Christian is a hostile boy full of unvented anger inside him. Recently losing his ill mother, he is particularly angry about his father(Ulich Thomsen). Christian does not forgive his father for lying to him about how much she was sick, and, at one point, he even accuses him of having wanted his mother dead. The father, who is also hurt by her death, tries to connect with his son despite his frequent absence due to his work, but he is at a loss in front of his son’s hostility.

In Christian’s angry view, the people deserve the punishment if they do wrong to others, and now his belief is headed to another target when he and Elias see Anton pushed and slapped by a very aggressive and unpleasant guy for a trivial problem between them. Christian thinks he needs to be punished, and Elias follows him without hesitation, but Anton rejects the idea of getting revenge on that guy(The original Danish title, “Hævnen”, means “Revenge”).

For showing the example to them with non-violent attitude,  he takes the boys to the auto repair shop where that man works. Though he manages not to lose his composure while bullied by him again, he is not successful with what he tries to do; he only confirms to them that how loathsome that guy is. Later, when he goes back to the refugee camp, his belief is shaken further. The wounded war lord comes for his medical help. He is the guy responsible for that terrible atrocity, but, as a doctor, Anton has to accept him like any of his patient, in spite of the objection from others working with him. 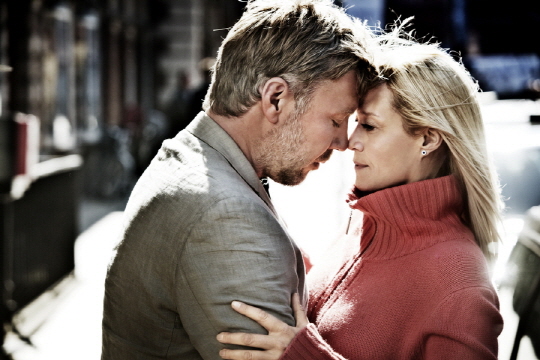 The director Susanne Bier previously made intimate dramas about the people struggling with their difficult positions, such as “Brothers”(2004), which was nicely  remaked by Jim Sheridan a few years ago, and “Things We Lost in the Fire”(2007), her first attempt in Hollywood with the good performances by Halle Berry and Benicio Del Toro. She did a good job in this movie. The characters and their situations in the screenplay co-written by her are believably humane. The neat, polished cinematography provides the calm, objective base for story. Bier pulls the excellent performances from her ensemble. Especially in case of two child actors, they capably hold the center with the strong emotional bond between them shown on the screen. From their relationship, you cannot help but think about the shooting incidents at the American high schools reported in the media.

Their story is good enough to draw our attention, and so does the other story unfold in Africa. However, while trying to link them together through the blatant manipulation in the third act, the movie begins to lose its power, and I even wondered whether the latter is really necessary for the former. I have to admit that I was relived about how it ended for I came to care about the characters, but I also felt the ending disappointingly artificial; it resolves the conflict in a way too easy and predictable.

It has flaws, and I am still not so sure about some parts because of its shallowness, but “In a Better World” is recommendable to some degrees. It could have been a better movie in other better world, but it is good and sincere enough win Best Foreign Language awards at Golden Globe and Oscar early in this year, though I don’t think it is better than other nominees. As the movie suggests, we are not entirely incapable of making a better world. However, in my opinion, the one the movie wants to come will be possible only if the evolution process pushes us to more understanding and empathy in the future.

This entry was posted in Movies and tagged Africa, Doctor, Father and son, Refugee Camp, School, Violence. Bookmark the permalink.