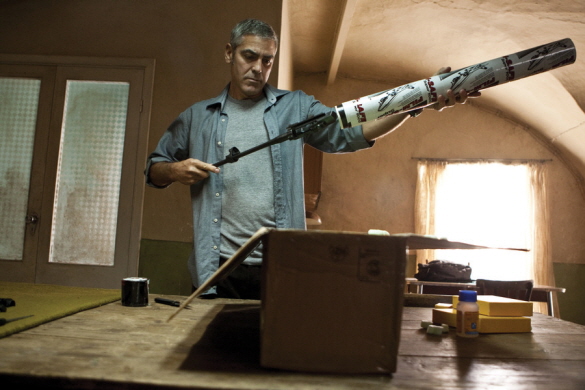 When “The American” was scheduled to be released in next week in South Korea(the release is recently postponed to the last week of this December, by the way), the trailer was shown at the screening room and the leaflets were prepared for the audience. The way they advertised this movie was seriously misguiding in many aspects. They tried to make believe our audiences that the movie belonged to the territory of the Bourne trilogy or recent blockbuster action movies like “Knight and Day”.

“The American” belongs to a far, far different territory. It is based on Martin Booth’s novel “A Very Private Gentleman”, and, as you probably guess from the novel’s title, this arthouse movie is a calm character study on a very private character who is a cold, efficient machine who seems to have been devoid of basic human emotions. It has some “action scenes”, but this is the movie that depends on the quiet tensions and ambiguity in the story. It fascinates us with its hero instead; It beckon us to watch what its hero is doing now, how he interacts with the people approaching to him, and, this is the most elusive element in the movie, how he thinks or feels.

The movie gives two names to its American hero(George Clooney), but whether his real name is Jack or Edward does not matter to us. His profession defines his identity, not his names. He is a competent killer and he can be quite heartless without any hesitation if the situation requires him to be, as shown in the opening scene at the snowfield in Sweden. It seems some Swedish guys are running after him for the reasons not clearly explained in the plot, and, as instructed by his boss, he goes into hiding in the rural area of Italy. 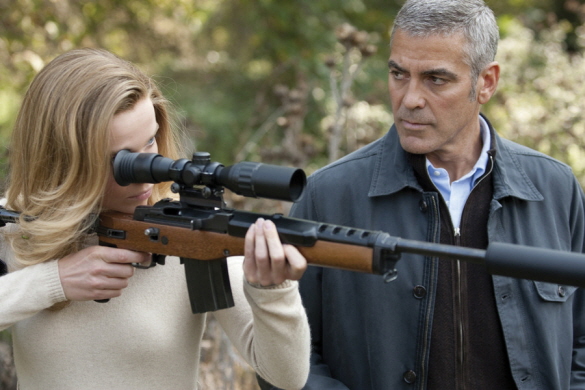 Disguising himself as a photographer, he arrives in some quiet country town and gets his temporal residence in this pastoral place. Not long after that, his boss Pavel(Johan Leysen) gives him a new assignment. Rather than killing somebody, it is making a special rifle for the unspecified job. He soon meets a woman named Mathilde(Thekla Reuten). Their conversation at the open place surrounded by people is terse, but Rowan Jaffe’s screenplay is economically effective. The technical specifics of the job are precisely conveyed between them; he gets nothing but what he needs to know for the operation and that is all.

We see how he works on this assignment while maintaining his cover. As a disciplined man, he starts his day with the exercise. While unassumingly going around town, he visits the garage recommended by the town priest(Paolo Bonacellni) and acquires what he needs for his production. While privately working in his room, he is meticulous enough to make a elaborate killing machine and keep his secret operation undetected by others – he is certainly a skilled craftsman. And he visits a brothel near the town and gets involved with one of the prostitutes, Clara(Violante Placido).

It looks like his problem keeps following him. He is constantly vigilant about his surroundings. As a seasoned professional, he cannot trust anyone easily. The town priest sees the man hiding himself inside the austere facade from him, but he declines to tell anything to the priest. There is a certain tension between him and Mathilde, but we can never be sure about what kind of tension it exactly is. In case of Clara, well, she likes him and it is possible that she begins to melt his cold heart, but his reserved attitude reminds us that anything can happen in his world. 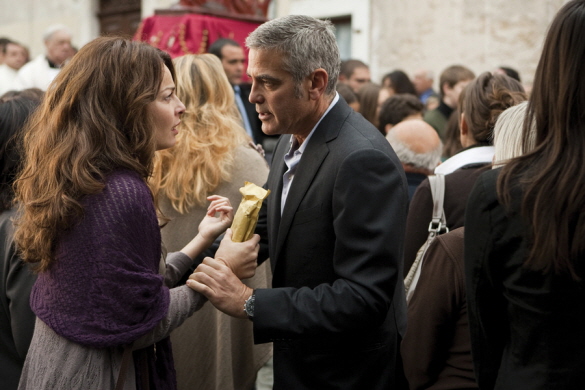 The director Anton Corbijn, who previously impressed me with a good musician biopic “Control”, makes the movie reminiscent of those dry, hard-boiled European crime dramas made in the 60-70’s. Like Jean-Pierre Melville’s great movie “Le Samouraï”, the movie has an interesting character who strictly leads a barren, lonely life mainly occupied with his profession while rarely showing the thoughts and feelings. George Clooney, one of the most likeable Hollywood stars, is probably the last man you can imagine for such a distant character, but he pulls it off with his steely performance that stealthily implies a man who wants to finish his journey in the cold. Clooney has been expanding his career wisely while going between the commercial movies and the serious ones, and he succeeds again with something different.

Corbijn diligently builds the tension in his movie while making the small moments with lots of care. The movie looks fabulous with the good locations. Whether it is the dark alleys lighted by the blue fluorescent lights and orange sodium lights or the quiet sunny places outside the town, there is always the subtle anxiety. When the situation is suddenly changed, it takes some effort for us to sense that. Once you sense it, the tension on the screen becomes palpable to you despite the calm surface.

Under Corbijn’s firm direction, the key supporting actors keep themselves on a thin line and ably walk on it. They are relatively unknown compare to Clooney, but each of them does a credible job that suggests something more than it meets the eyes. While Thekla Reuten has a good scene with Clooney where her character willingly puts herself on the matter of trust and doubt, Placido is attractive as a prostitute who may want to give her reticent client more than his pleasure. And Leysen does far more than phoning his performance at the other end of the line.

“The American” can provide you a compelling experience as long as you know how it is about rather than what it is about. While not resorting to a typical auto-pilot storyline or obligatory shootout sequences following it, it quietly and proficiently examines something deeper inside the story with an assured hand. With its laconic attitude and cool machine-like efficiency, it is distant as much as its central character but it makes us curious about him. As the men whose job is killing other human beings, the killers cross the line and enter the world different from ours. It has different moral codes and it is not a warm place. The story of “The American” asks us the same thing many movies about such people have asked us. Can its hero bring himself to the world he probably left a long time ago? You’ll see. 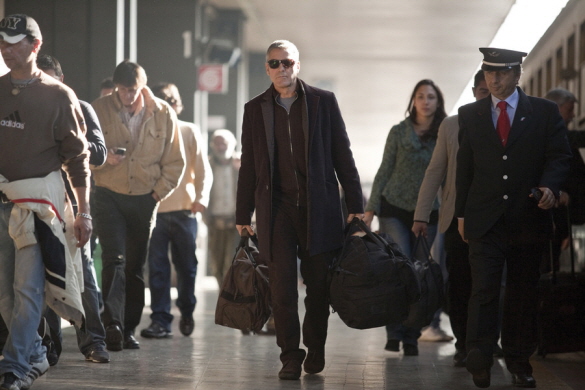