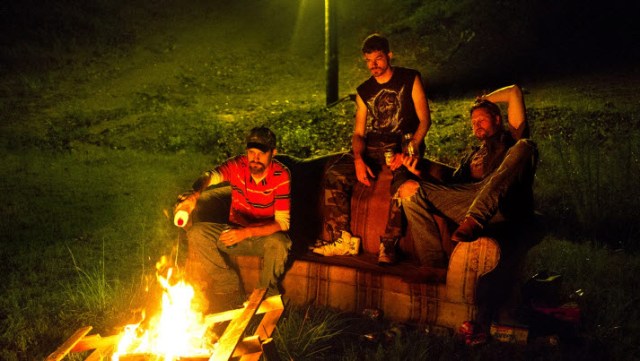 “The Death Of Dick Long” is as silly and hilarious as you can expect from its very title. As an offbeat black comedy film about one goofy attempt of cover-up, the movie cheerfully strolls from one humorous moment to another while its two main characters keep making unwise choices, and it certainly gets funnier as the situation becomes more complicated for them as a result.

Set in some rural town of Alabama, the movie opens with three guys having a fun time together at one night. They are Ezekiel “Zeke” Olsen (Michael Abbott Jr.), Earl Wyeth (Andre Hyland), and Dick Long (Daniel Scheinert, who is the director of the film), and the opening montage scene shows them playing music together in the garage of Zeke’s house for a while and then going outside for having more fun and excitement. After drinking some beer and playing with a bunch of firecrackers on the field, they all go inside a nearby barn, but then something quite serious happens, and we soon see Zeke and Earl hurriedly taking Dick’s badly injured body to a local hospital.

Because they do not want to get themselves associated with whatever happened to Dick at that time, Zeke and Earl just leave Dick’s unconscious body in front of a local hospital and then leave immediately before anyone sees them, but, in the next morning, they belatedly come to realize how bad their situation really is. Shortly after being taken into the hospital, Dick unfortunately died, and, because Zeke and Earl took his wallet in advance, his body remains unidentified while also drawing the attention of the local police led by Sherriff Spenser (Janelle Cochrane), who assigns the case to Officer Dudley (Sarah Baker), a young female police officer eager to prove herself to her superior.

Earl instantly decides to quit his job and then leave the town as quick as possible, but Zeke cannot do that at all because of his family. His wife Lydia (Virginia Newcomb) does not suspect anything yet even though her husband was absent throughout that night, but Zeke is soon thrown into panic due to a big problem involved with the backseat of his car, and things get more problematic when he has to take his little daughter to her school by his car.

And that is just the beginning of a series of small and big troubles for Zeke and Earl, who, to our amusement, are not so good at making decisions. At one point, Zeke manages to avoid being suspected by a couple of polices officers whom he and his daughter encounter at a local gas station, but then he has to take care of his daughter’s clothes quickly, which becomes an incriminating evidence just like his car. Once Earl takes her to her school, Zeke and Earl embark on cleaning the car, but they only come to realize later that there is a better solution for this problem of theirs.

Meanwhile, Dick’s death causes quite a stir in the town. The bizarre cause of his death baffles the Sherriff and Officer Dudley as well as the doctor who examines his body, and it does not take much time for many people in the town including Lydia to learn of the odd details of the case. Seeing how much his wife is disturbed by the case, Zeke only comes to lie to her about his car and several other things, and he feels more guilt as Dick’s wife is baffled by her husband’s inexplicable disappearance.

After slowly building up its comic momentum, the screenplay by Billy Chew eventually arrives at the point where we come to learn of what really happened to Dick, and I assure you that you will get a big laugh as rolling your eyes for a good reason. Of course, I will not go into details for not spoiling your entertainment, but I can tell you instead that I was considerably tickled by how the movie firmly sticks to its usual deadpan attitude even at that point.

During the last act, the movie becomes funnier as cornering Zeke and Earl more than before, and everything culminates to a climactic scene where Zeke needs to keep his appearance straight as much as possible in front of several other characters in the scene. While subtly accumulating tension below the screen, the movie also lets us sense the sheer absurdity surrounding Zeke and the other characters in the scene, and their utterly serious attitude certainly generates extra laugh for us as their situation is heading toward its eventual resolution.

The main cast members of the movie play straight to their characters’ increasingly outrageous circumstance. While Michael Abbott Jr. is alternatively pathetic and sympathetic as a guy desperately trying to deal with the situation way over his head, Andre Hyland has his own small amusing moments as Zeke’s dim friend, and Virginia Newcomb is particularly wonderful during a crucial scene between her and Abbott later in the film. As two different policewomen working on the case, Sarah Baker and Janelle Cochrane effectively complement each other, and their characters become more endearing to us as they turn out to be more practical and sensible than they seem at first.

“The Death of Dick Long” is the second feature film directed by Daniel Scheinert, who previous made “Swiss Army Man” (2016) along with Daniel Kwan. Compared to “Swiss Army Man”, which surely gave me many weird moments to remember via a decaying corpse played Daniel Radcliffe, “The Death of Dick Long” is less nutty and whimsical, but it is still a fairly enjoyable movie on the whole, and you will not be disappointed if you have some morbid sense of humor like me.

This entry was posted in Movies and tagged Comedy, Crime. Bookmark the permalink.