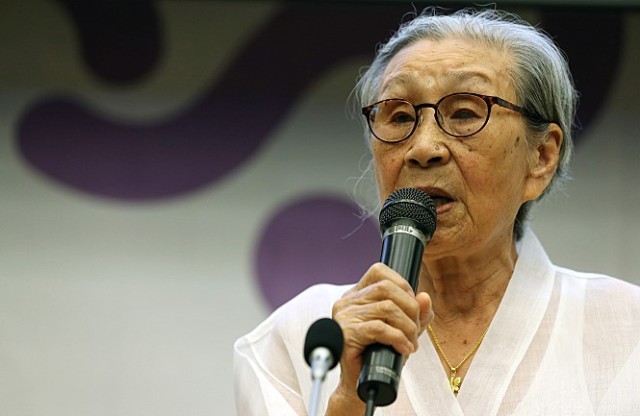 South Korean documentary film “My Name Is KIM Bok-dong” looks into the last defiant years of an old lady who tried hard along with her fellow survivors for getting an official apology from the Japanese government for more than 25 years. Although they were quite afraid of being labeled as the victims of that heinous war crime committed by the Japanese military during the World War II, they bravely went out in public for reminding us of what should not be forgotten, and it is sometimes poignant to observe how they have kept trying despite many obstacles including their impending mortality.

At the beginning, we get to know a bit about the early life of Kim Bok-dong, who died at the age of 92 early in this year. When she was 14 in 1940, she and several young girls were promised that they would earn a lot as working in a factory outside Korea, but, as soon as they arrived at the place in question, they were forced into sex slavery as ‘comfort women’ for Japanese soldiers. She managed to survive and then returned to her hometown 8 years later, but she could not possibly tell anyone what she went through because, like many other survivors at that time, she did not want to be marked as a disgrace to her family and others.

However, during the 1990s, Kim decided to talk about her terrible experience in public along with a group of survivors, though that decision of hers caused considerable personal pain for her. As she had to recollect again and again what she had to endure during the war, she felt her old psychological wounds opened up again, and she also found herself disconnected from her siblings, who did not want to see her again as being ashamed of her. 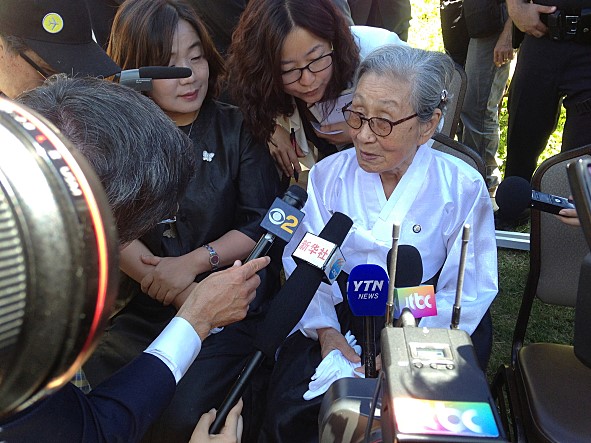 In the end, there seemed to be some progress for her and her fellow survivors as the Japanese government eventually promised the apology to them, but it eventually did not do anything to alleviate their painful memories of sexual abuse and exploitation. As a matter of fact, it still does not show any particular will to apologize for this atrocious war crime or admit its legal responsibility, and this still remains as a hot issue at present for many people in South Korea and Japan.

Feeling quite disillusioned, Kim decided to return to her hometown, and then she remained silent for more than 10 years, but then, around 2010, she came to change her mind. As the Japanese government led by Prime Minister Shinzō Abe became more aggressive in whitewashing the World War II history, she and her fellow survivors came out again for demanding the apology from the Japanese government again, and we see them participating in demonstrations along with many other activists despite their increasingly fragile physical condition.

As one of the more prominent members in the group, Kim went here and there in not only South Korea but also several other countries including Japan, and we see her recounting her horrible war experiences to many different people willing to listen to her. Thanks to the strenuous efforts from her and others, the comfort-woman stature was established in Glendale, California a few years ago, and then a similar one was also established right in front of the Japanese embassy in Seoul, where Kim and her fellow survivors held a routine demonstration along with a bunch of young activists. 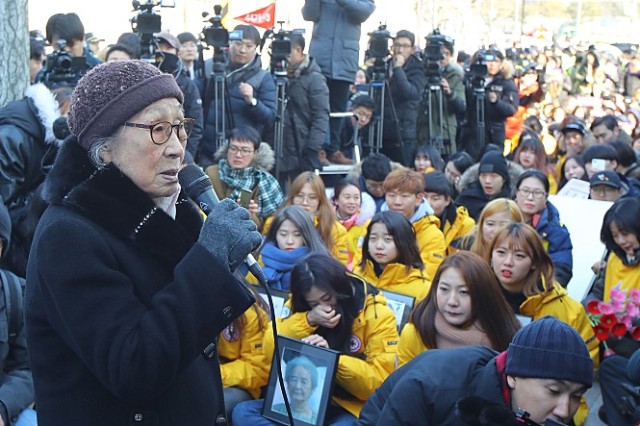 However, the South Korean government, which was led by President Park Geun-hye at that time, let them down a lot when it hastily reached to an agreement on the comfort women issue with the Japanese government in late 2015 while willfully disregarding what had been demanded by Kim and her fellow survivors for many years. As shown in the opening part of Miki Dezaki’s documentary film “Shusenjo: The Main Battleground of Comfort Women Issue” (2019), this agreement angered lots of South Korean people at that time, and there is a memorable scene where one of Kim’s fellow survivors angrily chides a high-ranking South Korean government official, who does not have anything to tell her except some empty platitudes.

Nevertheless, Kim and her fellow survivors did not give up despite this another moment of disappointment and frustration of theirs. Although they were often reminded of how short their remaining life was, they kept going on as usual, and Kim showed considerable resilience even though she became a lot more weakened as time went by. Around 2018, she was diagnosed to have cancer, but that did not stop her at all. She continued to go to her usual demonstration site, and there is a touching scene where she visits a Korean Japanese high school in Japan for showing her constant support.

Although it loses its focus a bit during its last 30 minutes as showing what those valiant young activists did for Kim and her fellow survivors, “My Name Is KIM Bok-dong” still holds our attention via its earnest and respectful approach, and director Song Won-geun did a fairly competent job of presenting his human subject with considerable care and sincerity. It did not show me anything particularly new about comfort women issue, but it still works as a moving tribute to its human subject, and I was not so surprised when I heard some emotional response from the audiences sitting behind me during the screening held at last night. In short, this is another good documentary about comfort women issue, and, if you are not that familiar with that subject, I strongly recommend you to watch it along with “Shusenjo: The Main Battleground of Comfort Women Issue”. 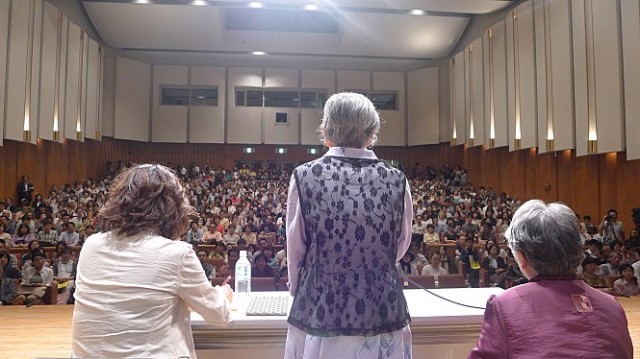