“Rocketman” is a typical but flamboyant biographical jukebox musical film based on the life and career of a man who has been one of the most successful musicians in our time. While it is often generic and predictable in terms of story and characters, the movie is still fairly entertaining thanks to its brash mix of style, music, and performance, and I often found myself gladly going along with its bouncy energy and spirit despite some reservation.

The man in question is none other than Elton John (Taron Egerton), and the movie opens with when Elton voluntarily checks into a rehabilitation center for addicts while wearing his gaudy and colorful concert attire. As he casually admits to others at a meeting supervised by his counselor, he has struggled with serious addiction problems for many years, and, after recently hitting his latest bottom, he is ready to face his personal demons while also reflecting on many ups and downs in his life and career.

As Elton begins to ramble and whine on his life and career in front of his counselor and fellow addicts (how patient and generous they are!), the movie promptly takes us to his early years. During that period, he was a shy, introverted suburban kid named Reginald Dwight, and he was not that happy as growing up under his problematic parents who did not love much each other, but he felt happy whenever he let himself driven by his considerable musical talent. As getting the constant support from his grandmother, he was eventually allowed to study in the Royal Academy of Music, and we soon see him growing up to be a young adult musician full of hope and ambition despite his unknown status.

This is surely a familiar setup for your average rags-to-riches musician drama film, and the screenplay by Lee Hall does not exceed its genre conventions much, but the movie overcomes them with a series of wonderful musical moments driven by those popular songs of Elton. There is an enthralling scene where various suburban people singing and dancing around Elton and his younger self, and then there comes a little spirited moment when young Elton imagines himself conducting an orchestra for himself, and then we are served with another joyous song and dance scene which makes a smooth transition from Elton’s childhood period to his following adulthood period.

After performing at local pubs for a while, Elton is eventually brought to a record company run by Dick James (Stephen Graham), and Elton’s manager Ray Williams (Charlie Rowe) subsequently introduces Elton to a young lyricist named Bernie Taupin (Jamie Bell). While they do not click that well together at first, Elton instantly responds to Taupin’s lyrics with his relentless musical output, and that is the beginning of their long friendship/partnership during next several decades.

Once Elton and Taupin finally present something sounding good enough to Williams and James, Elton is allowed to take next several steps for his career, and it looks like nothing can stop him. After his breakthrough performance in LA, his career rapidly goes up and up with more hit songs, and he soon comes to reach to the top of his field while also regarded as the next big British pop star after the Beatles.

Around that time, Elton comes across a guy named John Reid (Richard Madden), who does not flinch at all from the mutual romantic feeling developing between them but subsequently turns out to be a wily opportunist. After pushing away Elton’s business associates, Reid becomes the one who manages everything in Elton’s life and career, and Elton has no problem with that while gradually letting himself emotionally abused by his lover/manager.

With his increasing feeling of self-hate, Elton comes to tumble into more despair and frustration. While pushing himself into more work as shown from a dizzy but dazzling musical sequence where he rotates from one big concert to another, he also begins to develop serious alcohol and substance problems, and that accordingly makes him more distant to a few good people close to him including Taupin, who is not so pleased to see his friend/partner getting worse and worse than before.

Of course, there eventually comes a dramatic moment when Elton comes to realize that he must do something for himself right now, and I must point out that the movie later falters a bit with several clichéd moments including the one where Elton make peace with various important figures in his life, but it is still engaging to watch due to the energetic lead performance by Taron Egerton. Besides doing a fantastic job of embodying Elton John’s contradicting personality, Egerton deftly handles numerous musical performance scenes through the film as singing Elton’s songs for himself, and he is also supported well by several good supporting performers including Jamie Bell, Richard Madden, Bryce Dallas Howard, Stephen Graham, Charlie Rowe, Gemma Jones, and Tate Donovan.

“Rocketman” is directed by Dexter Fletcher, who recently drew some attention for temporarily handling the notoriously troubled production process of “Bohemian Rhapsody” (2018) instead of Bryan Singer. While not breaking any new ground in its genre territory, the movie keeps engaging and entertaining us thank to Fletcher’s competent direction, and I think its overall result is a bit better than “Bohemian Rhapsody” at least. Sure, it is full of genre conventions and clichés, but it is imbued with enough style and gusto to compensate for its weak aspects, and I must tell you that it refreshed me a bit when I watched it at last night. I was very tired when I walked out of the screening room around midnight, but I felt good about the movie nonetheless, and that was more than enough for recommendation. 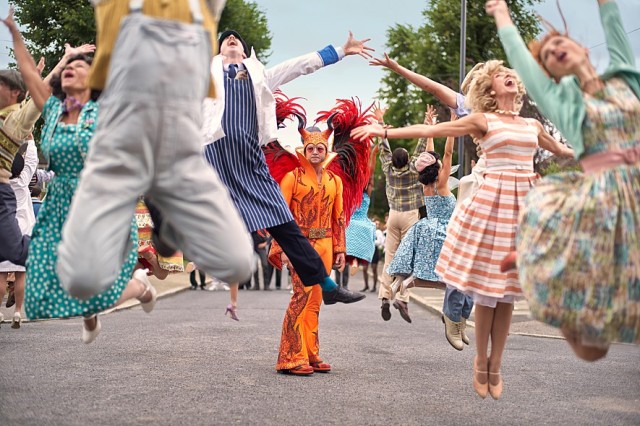