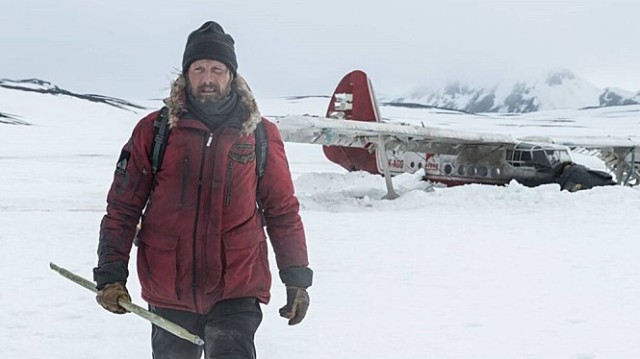 During its first act, “Arctic” impressed me a lot with vividly cold and harsh moments of desperation and solitude which actually made me curious about how they were made, and that is why it is a shame that the movie becomes relatively less interesting as eventually being turned into something more conventional. Although I was distracted by that flaw and other ones in the film to some degree during my viewing, the movie is still fairly watchable at least mainly thanks to its strong lead performance, and the overall result is a solid survival drama somewhere between “All Is Lost” (2013) and “The Revenant” (2015).

The first act of the movie mainly focuses on the grim, monotonous daily routine of its hero played by Mads Mikkelsen. Although nothing much about him is told or shown to us, the movie lets us slowly gather the small and big details on how its hero has endured his current situation since his plane crashed on a remote spot somewhere in the Arctic Circle some time ago. While his plane has functioned as a shelter to shield him from the extremely cold and harsh weather outside, he has subsisted upon the fishes he often catches with fishing lines, and he also routinely maps his surroundings in addition to running a distress beacon with a dynamo.

It looks like he will survive for several more days as waiting for any chance of rescue, but he is clearly exhausted by his continuing isolation and desperation, and there is also the constant possibility of danger around him. At one point, he finds that some of his fishes are stolen, and then he notices a big animal footprint on the snowy ground. which was probably left by a polar bear he subsequently spots from the distance.

Although mostly consisting of a series of wordless moments, the first act of the movie steadily holds our attention via the charismatic presence of Mikkelsen, who is no stranger to stoic suffering and endurance as shown from “The Hunt” (2012) and “The Salvation” (2014). While looking physically believable as demanded, Mikkelsen ably embodies his character’s steely resilience, and we come to observe his character’s increasingly despairing struggle with more interest and care. 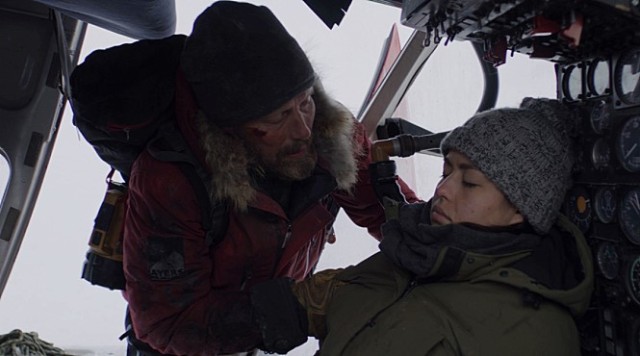 And then the screenplay by director Joe Penna and his co-writer/editor Ryan Morrison thrusts its hero into a new situation during the next act. While our hero is going through his usual daily routine on one day, he notices a helicopter approaching toward him, so he tries to attract the attention of whoever is in that helicopter, but, alas, there suddenly comes a snow storm, which causes that helicopter to crash on the ground. When he subsequently comes to the crash site, he finds that one of two people in the helicopter already died while the other one, who is a young woman, is barely conscious as severely injured.

After the snow storm is over, he extracts that young woman from the helicopter and then takes her to his shelter, but it gradually turns out that her injury needs a lot more than emergency treatment. No matter how much he tries to make her get better during next several days, her condition gets worsened day by day, and, after checking the map again, he comes to decide to take a long, perilous journey for saving her, though that is probably going to demand him to do a lot more than dragging her body across the Arctic plain.

What follows next is a number of grueling moments which are sometimes tough to watch. In case of a long sequence involved with an unexpected obstacle our hero comes across later in the movie, it will make you cringe at times for good reasons, and there are also several scenes which will induce chilliness inside you with palpably cold ambience felt from the screen. Cinematographer Tómas Örn Tómasson did a stunning job of giving us wide and crisp shots of Arctic landscape shots, and the overwhelmingly icy sense of desolation and solitude surrounding our hero is further accentuated by the moody atmospheric score of Joseph Trapanese. 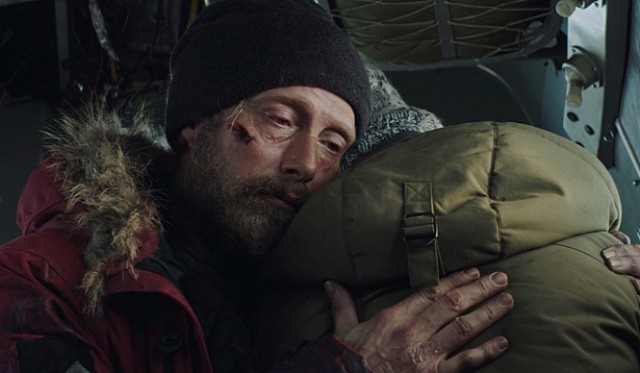 As the movie comes to falter during its last act, I came to be more aware of a number of weak spots in the film. There are a few contrived plot turns which do not work as well as intended, and I think the movie could give some more human depth to the relationship between our hero and that young woman, who sometimes feels to me like a mere plot tool instead of another substantial human part in the story. Above all, the movie tries a little too hard to generate dramatic effects during its finale, and I must say that I could help but become impatient while watching this part.

Nevertheless, the movie still works as Mikkelsen diligently carries almost everything throughout its running time. Since he drew my attention for the first time via his villain performance in “Casino Royale” (2006), he has always been an interesting actor to watch, and his undeniable talent is evident from how he effortlessly expresses his character’s complex feelings and thoughts as firmly sticking to his reticent appearance.

Although I still feel some dissatisfaction, I recommend “Arctic” mainly for another commendable turn from Mikkelsen as well as the its impeccable Arctic atmosphere. It is not entirely without weak spots, but it did its job well on the whole at least, and you will not certainly be disappointed if you are simply looking for a well-made survival drama. 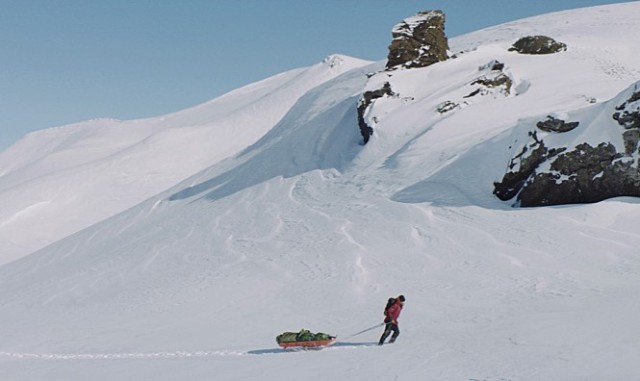 This entry was posted in Movies and tagged Arctic, Survival. Bookmark the permalink.