Intense and brutal with a number of striking moments of violence, French film “Revenge” is a survival horror drama for the #MeToo era. During its first act, the movie disturbingly presents that toxic objectification of female body through male viewpoint, and then it goes through a full horror mode as its unfortunate heroine struggles with her physical and psychological traumas, and then it powerfully culminates to what can be regarded as a sanguinary rendition of female empowerment.

In the beginning, everything seems fine as our young American heroine, named Jennifer (Matilda Lutz), arrives with a rich French guy named Richard (Kevin Janssens) at his luxurious modern house located in the middle of some remote desert area. Although it is evident right from an early scene that Richard is a married man, Jennifer does not mind that at all, and all she cares about for now is having a good time alone with him during two days.

However, their private time does not last that long when Richard’s two friends come to the house earlier than expected. Because they were supposed to come after Jennifer leaves the house on the next day, Richard is not so pleased about this unexpected change, but he welcomes them into his house anyway, and we soon see them having an evening drinking party along with Richard and Jennifer. The mood is initially jovial, but the movie begins to unsettle us as emphasizing how lustfully Richard’s friends look at Jennifer. With the frequent close-up shots of her body parts, the movie directly points out what these unpleasant guys see from Jennifer, and this feels all the more unnerving as we observe her being rather oblivious to the objectifying male gazes on her mainly due to her drunken state. Most of us heard about those shocking stories about women who were raped while being inebriated, and that is why we come to fear for Jennifer more when she becomes flirtatious with one of Richard’s friends, who clearly desires for something from her. 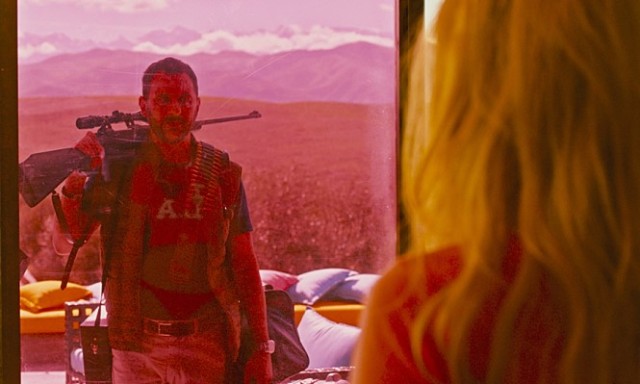 On the next day, Richard goes outside for taking care of a legal matter associated with the hunt he and his friends are going to do, so Jennifer finds herself being together with Richard’s friends in the house. When one of them approaches too close to her, she tries to handle this very uncomfortable circumstance as tactfully as possible, but he cruelly persists in his position, and that eventually leads to a very traumatic incident for her. While never overlooking the horror of what happens to her, the movie handles this scene with considerable restraint, and I was especially struck hard by a brief loathsome shot involved with a certain snack, which reminds me of how survivors of sexual violence vividly remember some graphic details of their traumatic experience. As watching that shot, I wrote down in my mind: “She will never forget that image for the rest of her life.”

When Richard returns, he naturally becomes furious about what happened during his absence, but he turns out to be no better than his deplorable friends. He offers to Jennifer a considerable amount of money in exchange of her silence, but she refuses to accept anything while simply wanting to get away from him and his friends as soon as possible. As things accordingly become quite tense between her and Richard, she eventually tries to escape, and we subsequently get another shocking moment when Richard comes to decide to do something quite drastic for covering up everything.

Fortunately, Jennifer manages to survive and then evade Richard and his friends, and the second act of the movie focuses on her painful and desperate struggle. Still traumatized by her horrible experience, she must do anything for her recovery and survival, and, as constantly pushed by her extreme condition, she often surprises herself as well as us while showing considerable courage and resourcefulness. As some of you have already expected, the movie has several grisly moments of physical mutilation, and you will surely wince as watching how she takes care of a very serious wound once for all at one point.

As the movie enters its eventual third act, the movie becomes more intense and violent while occasionally reminding us of those unpleasant exploitation movies such as “I Spit on Your Grave” (1978), but it still firmly holds our attention under the competent direction of its director/writer/co-editor Coralie Fargeat. Although this is her first feature film, Fargeat demonstrates here the considerable command of mood and narrative, and I was particularly impressed by how she and her cinematographer Robrecht Heyvaert imbue their film with vivid, striking visual touches via effective lighting and color scheme. In case of the inevitable climactic scene of the film, they go all the way with their stylistic approach, and that certainly enhances further the dramatic effect of this very violent scene.

The four main performers in the movie are convincing in their archetype roles. Quite believable in her strong physical performance, Italian actress Matilda Lutz ably carries the film as her character is gradually transformed from a devastated survivor to a single-minded feminist avenger, and Kevin Janssens, Vincent Colombe, and Guillaume Bouchède are suitably despicable in their respective supporting roles.

In conclusion, “Revenge” is a tough stuff as reflected its very title, but it is also impressive for its skillful handling of dark, unpleasant subjects which have become more important due to the ongoing #MeToo movement, and I appreciate how it brings a female perspective to its genre territory. It is not exactly ‘entertaining’, but it is surely one hell of a genre piece to remember.

This entry was posted in Movies and tagged Horror, Sexual violence. Bookmark the permalink.