Unlike many South Korean lads, I did not have to go through two years of mandatory military service. Because I was a graduate student studying in Korean Advanced Institute of Science and Technology (KAIST), all I had to do during late 2007 was spending 4 weeks in a training camp, and I and other KAIST graduate students were rather treated well by our generous instructors during those four weeks. Thanks to them, we could finish our training course without much problem, and I am sometimes amused by all those silly moments I endured during that period.

However, I also remember a few unpleasant incidents which showed me how harsh and brutal the South Korean military can be to young individuals put into its oppressive system. In case of a certain high-ranking prick who always made life miserable for us as well as our instructors, he was nothing but an arrogant, sadistic bully in my opinion, and I still remember well when that hateful bastard threatened us with disciplinary punishment just because of one recruit’s minor mistake. Because of that, I was thrown into total panic attack throughout that day, and it was fortunate that I and others did not get punished in the end.

And that is why I reacted strongly to a number of emotionally brutal scenes in South Korean independent film “The Seeds of Violence”, which coldly observes systemic violence not only from the South Korean military but also the South Korean society. While it is disturbing to watch how commonly physical/emotional violence is committed among young soldiers, it is also chilling to see how equally violent the outside world is in fact, and the movie eventually leaves us with a gloomy moment of reflection on this incorrigible social matter which seems to have no end in sight. 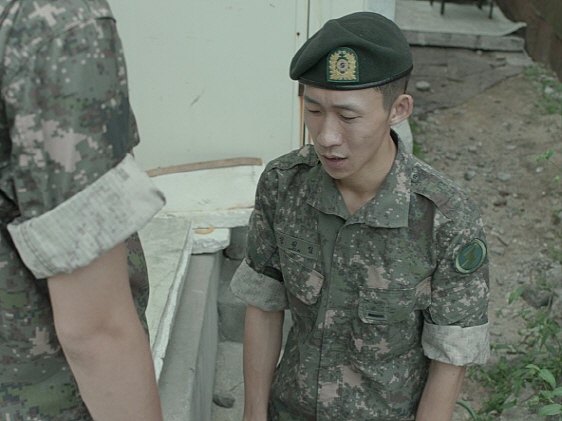 In the beginning, we are introduced to two young soldiers: Joo-yong (Lee Ga-seop) and Pil-rip (Jung Jae-yun). Compared to Joo-yong, Pil-rip is still a rookie, and the opening scene shows Pil-rip going through a silly test as ordered by their several senior soldiers. He must take off his military shoes and socks within half a minute, and we see him doing the job as quickly as demanded.

They are all allowed to spend a day outside their base, so the mood seems to be jolly on the surface, but there is apparent awkwardness among them as they later drink together outside the base. Because Pil-rip is older than his seniors, he is allowed to talk casually with them, but they are virtually bullying him as a matter of fact, and that is surely one of the most cringe-inducing moments in the film.

Meanwhile, it is gradually revealed to us that there is a big problem among these guys. Somebody sent a report on the physical abuse committed by one of the senior soldiers, and that senior soldier in question is not so pleased about this mainly because he is about to embark on his professional military career. He and other seniors are determined to find the culprit, and, at least in their view, there are only two possible suspects: Pil-rip and Joo-yong.

When they are about to face one of their seniors because of that, Pil-rip desperately requests Joo-yong to do something about this grave situation in which they will be punished in one way or another. Pil-rip adamantly claims his innocence, but there is nothing Joo-yong can do about that, even if he is the one who sent that report.

In a motel room, they are cruelly punished by that senior, who even forces Joo-yong to slap Pil-rip hard for not injecting enough discipline into him. In the end, Pil-rip is savagely beaten down by that senior as Joo-yong helplessly watches it all, and that is when a trouble occurs. One of Pil-rip’s teeth happens to be broken, and that serious injury must be covered up as soon as possible for avoiding more troubles. 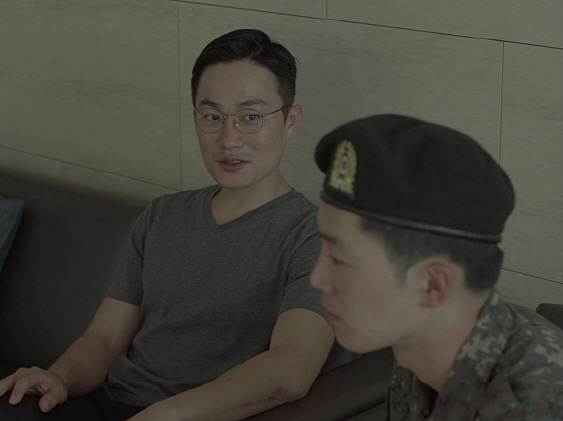 Fortunately, Joo-yong can get help quickly because his sister Joo-ah (Kim Soy), who lives in a city near the base, is married to a dentist, but the situation becomes more frustrating for him and others as time goes by. While she is supposed to come to the base for meeting her brother, she does not even answer his phone call for some reason, so Joo-yong has no choice but to take Pil-rip to the city although they are technically not allowed to go that far. Shortly after they arrive in the city, they face another problem, and that surely frustrates Joo-yong a lot, who eventually becomes quite harsh and hostile to Pil-rip at one point.

After they manage to arrive at a dental clinic belonging to Joo-ah’s husband, Joo-young comes to notice something odd between his sister and her husband, and that ultimately leads to another moment of anger and frustration for Joo-young. As watching that moment, I was reminded of how casually violence and misogyny are allowed in the South Korean society, which has been filled with violent, unpleasant males invariably influenced by that toxic concept of masculinity during their military service years.

“The Seeds of Violence” is the first feature film by director Lim Taegue, and he did a commendable job on the whole. Reminiscent of the works of the Dardenne brothers, the movie steadily and patiently follows its conflicted hero via its handheld camera, and Lim also draws solid natural performances from his performers. Although it often feels limited by its low budget, the overall result clearly shows that Lim is a talented filmmaker, and I guess we can have some expectation on what will come next from him.

This entry was posted in Movies and tagged Miltary, South Korean Film. Bookmark the permalink.