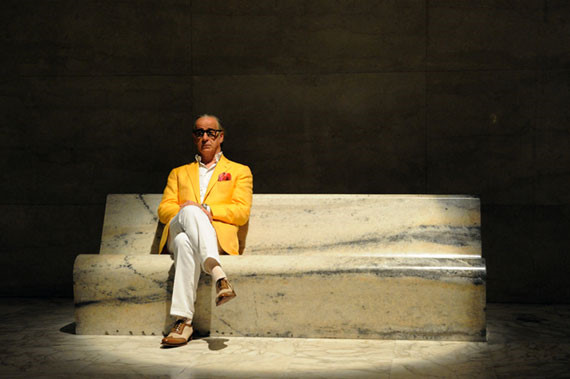 “The Great Beauty” is a grand visual tapestry from Paolo Sorrentino, who has established his status as one of the most interesting directors from Italy. As an apparent homage to Federico Fellini’s great film “La Dolce Vita”(1960), the movie serves us with various intriguing or dazzling sights as strolling around the days and nights of Rome with its jaded hero, and we willingly follow its loose, episodic stream of visuals from the beginning to the end even when it confounds or baffles us with its grand gestures to behold.

The movie is packed with many memorable moments to talk about, and its opening scene is a prime example. We see a singing choir above a fountain somewhere in Rome at first, and then we also see a group of Japanese tourists accompanied with their guide, and then everything is smoothly presented in a wide shot. This moment is soon interrupted by a sudden incident which feels like a striking discord in the middle of the performance; I wondered for a while about what this scene meant, but I think this sets the kaleidoscopic tone of the film, which, as it looks at its city lovingly and bitingly, goes for many various things contradicting or resonating with each other in their odd, distinctive combinations.

And then we are thrust into a wild, energetic night party on the rooftop, which is literally a crazy mix of music and dancing bodies. If “La Dolce Vita” shows us how exciting and decadent the night life in Rome was during its time, “The Grand Beauty” shows us nothing has changed much even in the 21th century. Music and clothes and hairstyles have surely been changed, but the people at the party are still going for fun and pleasure as before, as if it were the last party of their lives.

Amid his friends and other familiar faces, Jep Gambardella(Toni Servillo) observes everything in his usual detached mode although he is always at the center of every night event he attends. As listening to his introspective words, you may think of him as an older version of Marcello Mastroianni’s gossip journalist hero in “La Dolce Vita”; Jep also came to Rome when he was young, and, after getting the fame through his first(and only) novel which is pretty much forgotten now, he has been working as a celebrity gossip journalist for around 40 years while enjoying his own La Dolce Vita.

He does not just live in this world but presides over it as a man at the top, and he has been rather weary of fun and excitement recently since his 65th birthday. He considers writing his second novel, and the signs of possible inspirations are spotted everywhere in his sight as he strolls around the streets of Rome, but he finds himself still stuck in his lifestyle. When we see him spending night time with his friends at his residence, it looks more like a meeting of addicts; their fun time is being over for them as they get aged, but they keep joining parties as they always did, and, as Jep points out in his acerbic response to the hypocrisy of one of his friends, they sort of comfort each other through being together as the fellow addicts who still cannot give up their jet-set lifestyle.

While reluctant about getting out of his comfort zone, Jeb also wonders whether there is any chance to discover the great beauty he once searched for as two women come into his life in their respective ways. One is a woman who was once his girlfriend a long time ago; after being notified of her death by her husband, Jeb slowly begins to wonder about their relationship in the past although he does not remember much about that except their brief time at the beach. The other woman is the stripper daughter of Jep’s long-time friend(she works in a strip club managed by her father, by the way); although they do not get that close, they become friendly with each other, and she indirectly reminds him of how he has wasted his time despite his awareness of it.

And the movie keeps throwing interesting moments to us as things keep happening around Jep and other colorful figures in his world. There is an absurd scene of a plastic surgeon promptly taking care of his patients, and his work rate is as fast as that of a fast-food chain employer taking orders from his customers. The private conversations between Jep and his dwarf editor have an extra dose of humor thanks to a big bear doll in the editor’s office, and there is a wonderful scene in which a living giraffe is placed at some historic site for the rehearsal of a magic show. We also see the countless photos on the wall capturing a man’s face being changed in the course of time, and there is a certain amount of poignancy as Jeb silently looks over them. 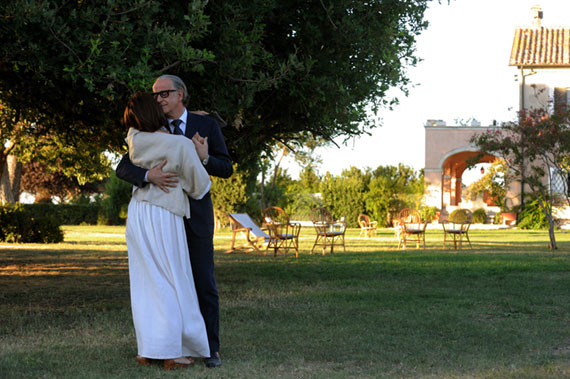 While filled with so many things we are supposed to absorb, the movie seldom loses the control during its long running time(142-min), and the director/co-screenplay writer Paolo Sorrentino did a stunning job of giving us a bountiful and entertaining visual experience. Like his previous film “Il Divo”(2008), a darkly cheerful film about a notorious real-life Italian politician, the movie freely bounces around in its loose story structure but it never loses its way even when we become confused at times. Every scene looks interesting and compelling because of careful scene compositions and camera angles, and the cinematographer Luca Bigazzi beautifully captures the streets and bridges and buildings of Rome while Lele Marchitelli’s score has its several moments to shine amidst various types of music on the soundtrack.

And everything is revolving around an understated but graceful performance by Toni Servillo, who is simply fabulous as the emotional anchor of the movie to hold on for us. While looking mostly suave and reserved, Servillo masterfully handles the humor and emotions inside his character, and he and the movie eventually arrive at a small, bright realization in the end. While it feels like a glimmer of hope and change, it is also surrounded by sadness and melancholy over the time which will never be regained, and that feeling is further resonated with a slow but immersive long-take scene during the end credit. Nothing substantial happens on the screen during that scene, but, as leisurely showing another beautiful side of Rome, this coda certainly adds another layer of melancholic beauty to the film already full of sad wistfulness. 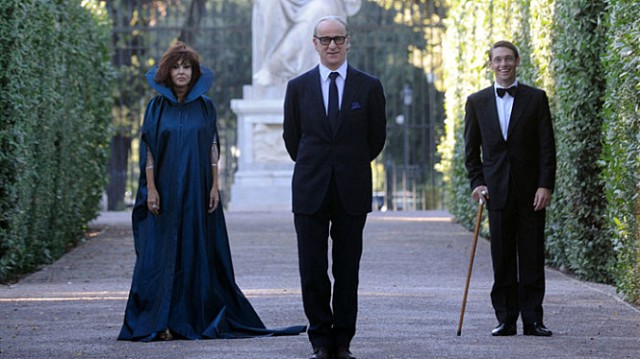 This entry was posted in Movies and tagged Journalist, Rome. Bookmark the permalink.